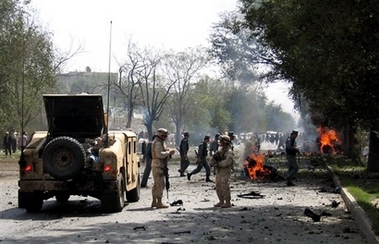 Suicide car bomb near US Embassy in Kabul kills 7
(AP)

Caption: U.S soldiers guard the spot of the bomb blast near the U.S Embassy in Kabul, Afghanistan on Friday, Sept. 8, 2006. A massive suicide car bomb struck a convoy of U.S. military vehicles in Kabul on Friday, killing at least 10 people, including two American soldiers, and wounding 17 others, officials and witnesses said. Photo: AP Photo/Paul Garwood


KABUL, Afghanistan - A massive suicide car bomb struck a convoy of US military vehicles in Kabul on Friday, killing at least seven people, including two soldiers from the U.S.-led coalition, and wounding nine, officials and witnesses said.

The blast, which took place near the US Embassy in the Afghan capital, tore a military vehicle into two burning chunks and scattered debris and body parts over a 50-meter (50-yard) radius.

It rattled windows throughout the downtown area and sent a plume of brown smoke spiraling into the sky.

Mohammed Aslam, a Kabul police official at the scene, said he had seen seven bodies and nine wounded people. He said he could not determine if they included foreigners.

An Associated Press reporter at the scene saw the bodies of two coalition soldiers lying meters (yards) from the vehicle.

The attack came days ahead of the 5th anniversary of the Sept. 11 attacks on the U.S., which sparked the U.S.-led invasion of Afghanistan that toppled its former Taleban regime for harboring Al Qaida terror network chief Osama bin Laden, who was blamed for masterminding the attacks.

It also comes amid the deadliest spate of violence in Afghanistan since the Taleban’s ouster, in which hundreds have been killed each month this year.

The explosion Friday took place about 50 meters (yards) from Kabul’s landmark Massoud Square in Kabul, which abuts the main gate of the heavily fortified US Embassy compound.

Dozens of US and British soldiers cordoned off the scene as investigators sifted through the wreckage of the charred military vehicle.

Soldiers retrieved body parts, apparently from the suicide bomber, and were placing them into plastic bags for further investigation.

This story has been posted in the following forums: : Headlines; COS - Kenya; COS - Afghanistan; Obituaries; Military