Congo Kinshasa RPCV Marcy Strazer swims the length of Wallowa Lake and back, a distance of just over seven miles 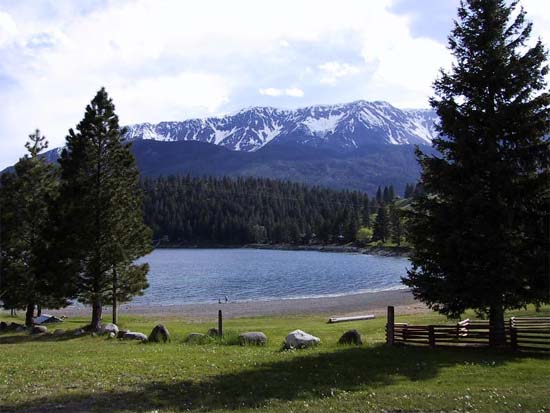 Strazer is originally from the Portland area, went to college at University of Oregon, served in the Peace Corps and continued to worked overseas with the UN and other agencies for six years. She completed her first triathlon at 15 years old. "Endurance sports seem well-suited to people in the 30s and above," says Strazer. "I really love the long training swim workouts and getting better at listening to my body and training smarter. My ideal post long swim recovery involves watermelon, a high electrolyte/carb drink and a hot mineral bath to reduce the lactic acid buildup."

Congo Kinshasa RPCV Marcy Strazer swims the length of Wallowa Lake and back, a distance of just over seven miles

WALLOWA LAKE — Two Wallowa County women capped their summer by swimming the length of Wallowa Lake and back, a distance of just over seven miles.

For Ann Humphrey of Enterprise and Marcy Strazer of Joseph, the Aug. 15 swim was a physically challenging, emotional, and life-affirming experience.

Both are lifelong swimmers. They belonged to swim clubs in their youth, and both are as comfortable in the water as out of it.

They usually begin swimming in late May and continue into October as long as the weather allows.

They have been active Wallowa Lake swimmers since 2003. In a way, Strazer and Humphrey have been preparing for this feat for almost two years. They swam the width of the lake several times in summers past, and in 2004 they swam one length of Wallowa Lake in one hour and 40 minutes.

One thing is for certain. This is not an isolated event. These are women who set goals and achieve them because pushing their limits is part of the way they live.

Strazer grew up swimming competitively and only rediscovered her love for swimming's simplicity and tranquility in the open water of Wallowa Lake.

"Freed from the confines of a swimming pool and going miles without turns adds to its meditative nature," she says. "Focusing on a steady and fluid stroke and establishing a relaxed breathing pattern gives me a ‘swimmers high,' similar to that of distance runners. Wallowa Lake is such a treasure for us."

Strazer is originally from the Portland area, went to college at University of Oregon, served in the Peace Corps and continued to worked overseas with the UN and other agencies for six years. She completed her first triathlon at 15 years old.

"Endurance sports seem well-suited to people in the 30s and above," says Strazer. "I really love the long training swim workouts and getting better at listening to my body and training smarter. My ideal post long swim recovery involves watermelon, a high electrolyte/carb drink and a hot mineral bath to reduce the lactic acid buildup."

In this way, she is able to continue a more consistent exercise schedule.

She and her husband grow much of their own food maintaining a healthy daily diet.

Humphrey, a biologist for OSU, came to Wallowa County from Minnesota by way of Wyoming where she and her husband managed a preserve for The Nature Conservancy. She says she found fulfillment and joy in focusing on swimming all summer.

"I just love swimming. The wonderful thing about it is the physical activity and the peaceful state of mind it brings," she says.

It was a process for Humphrey to figure out a training regimen that worked. She didn't want to do too much at once so she planned a workout schedule each week. She tried to swim every other day and to schedule rest time between one long swim and two shorter swims in a week.

"Swimming is a full body experience: the fluidity of motion and the immersion in the water," she says. "The absence of distractions, rhythmic breathing, the play of light and color in the water all add to the meditative nature of swimming. Now I'm intrigued with getting more efficient with my stroke," she adds.

On Aug. 6, 1926 Gertrude Ederle swam the English Channel. Eighty years ago this remarkable 19-year-old woman achieved a goal no other woman had gained.

She swam a total of 35 miles in 14 hours and 31 minutes. Lloyds of London laid seven to one odds against her. The last few hours she swam against a strong tide and stinging spray in her face, and yet she finished one hour and 52 minutes faster than anyone who had gone before her.

Strazer and Humphrey say they drew inspiration from Ederle's determination and physical prowess. They did not try to emulate her; rather, their swim seemed to be a tribute to her courage.

As the afternoon of their own swim wore on, neither thought of quitting. But both reached deep into their own inner strength to keep going.

"I just kept pushing on when I was really tired," Humphrey says. "Just one more stroke, one more stroke. I kept looking for the rocks on the bottom of the lake because if I saw them, I knew I would be close to shore. I think this experience will power me through other things that might be difficult. If I could do that, I can get through other challenges," she says.

"When we completed the first length and turned back around, we swam into a headwind and waves which made for tough going. My husband diverted us toward the shore where there was less wind and waves. But the return trip took an hour longer. I never thought of quitting, but I was very tired in the last hour. I had this pine tree that I had used as a marker and I kept looking for it. I also kept thinking of how Trudy Ederle persevered against the wind and the tide. I was so excited when I finally saw the rocks on the bottom of the lake through the water."

Like Ederle, Strazer and Humphrey had support teams beside them in the water. A tug boat with food, hot chocolate and family members accompanied Ederle. Ann's husband, Phil Shephard, and Judy Linman, an old high school friend, in a canoe, and Marcy's husband, Brian Concannon in a kayak supplied high carbohydrate, high protein sports gel, Gatorade and other snacks thrown into the water.

According to international long distance swim competition rules, the swimmers cannot touch the support boats or be touched by any person in the support team. Both Strazer and Humphrey adhered to those rules, as did Ederle in her record-breaking swim.

The most important function of the support teams was to set and keep the swimmers on a straight course down the lake. They timed intervals between snack and rest stops, calculated the swimmers' speed, and kept track of elapsed time.

"The hardest part was getting our husbands to take off work on a Tuesday to be our support teams," Strazer says. "Ann and I enjoyed working together on a two-month training plan. We set weekly goals with the focus on one long swim, increased by half an hour each week. We swam together a few times, but mostly supported one another with training tips and motivation. We had discussions about organizing the support and finally decided we should each have our own team and swim at our own pace, not try to stay together."

Humphrey had been sick for two days before the date of the swim.

"I didn't want to start and not finish so I was worried about that. But my team was incredible. They had everything figured out. I didn't have to wonder or worry about anything," she says.

The day of the swim was Humphrey's 50th birthday. A party was planned afterward and they were met on the shore by Beth Gibans, their cheerleader, with flowers and watermelon.

After more than five hours in the water, both were sore in the shoulders and arms. Strazer was a little shaky getting out of the lake. But they both reported feeling elated and energized for days afterward.

The importance of maintaining a healthy, active lifestyle is of primary importance to both Strazer and Humphrey. They hope that people will see Wallowa Lake as a resource for swimmers, not just as a venue for motorized water sports.

"It's a big lake and I think a part of the lake should be set aside just for swimmers, because of the safety issues. Most boaters are pretty careful but not all of them. If speeds were restricted along more of the western shoreline, swimmers could swim there without worrying about boats," Strazer says.

Humphrey agrees. "It would be nice if boaters, skiers and jet skiers were more swimmer aware. I've almost been hit by a jet skier, and a friend was nearly hit here in Wallowa Lake by a boat and water skier."

Strazer and Humphrey joined a short list of people when they swam just one length of Wallowa Lake. They started a new list when they became the first to finish the round trip. It is almost a mathematical certainty that more history awaits this pair. Both have spoken of circumnavigating the lake, a swim of approximately 10 miles. Humphrey will focus on increasing the efficiency of her stroke. Strazer wants to try a distance swim without a wetsuit.

Whatever goals they will be setting will be goals that push the limits of their endurance, strengthen their spirits and inspire their witnesses.

This story has been posted in the following forums: : Headlines; COS - Congo Kinshasa; Sports; Swimming