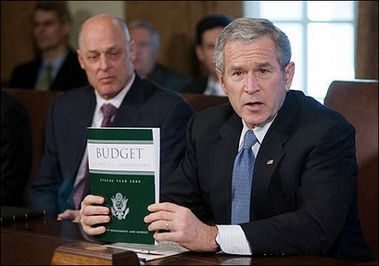 Caption: US President George W. Bush holds a copy of the 2008 Fiscal Budget during a meeting with his cabinet as Treasury Secretary Henry Paulson (L) looks on in the Cabinet Room of the White House. Bush presented the US Congress with a mammoth 716.5 billion dollar budget request to fund large US military, including its missions in war-torn Iraq and Afghanistan .(AFP/Mandel Ngan)

The budget proposal calls for $3 billion for the Millennium Challenge Corporation (MCC) for promoting sustainable economic growth and reducing poverty in some of the world's poorest countries.

An inability to respond to proposals from partner countries because of funding cuts, he said, would "undermine, perhaps irreparably, the incentive MCC assistance provides to countries to enact major political, social and economic reforms."

Speaking a the Center for Strategic and International Studies the same day, Randall Tobias, director of U.S. foreign assistance, said the fiscal 2008 budget proposal provides for a 20 percent increase in resources for low- and lower-middle-income countries over 2006 levels and a 54 percent increase in assistance to Africa. (See related article.)

"There's a 4 percent increase for the Near East as a vital investment in winning the global War on Terror and empowering the people of this critical region," he said. "There's a 6 percent increase in South and Central Asia, highly concentrated in states like Afghanistan and Pakistan, which are of critical importance to our national security and are also among the very poorest nations in that region."

Since President Bush took office, Tobias said, aid to Western Hemisphere countries will have increased, from $862 million to $1.66 billion if the current foreign assistance budget requested is approved by Congress.

The overall request proposes $4.2 billion for HIV/AIDS treatment, prevention and care activities in 15 African nations and an additional $1.2 billion for AIDS programs worldwide. Overall, it would expand the number of people in Africa and the Caribbean receiving live-saving treatment for HIV/AIDS to 2 million by 2009, and contribute to AIDS research and multilateral partner organizations.

The request, if approved by Congress, would continue the President's Malaria Initiative for Africa and includes $300 million to reduce malaria deaths by 50 percent in 15 targeted countries in Africa and to fund ongoing malaria programs around the world.

The proposed budget calls for $1.5 billion for child survival and health programs worldwide.

Funding to fight narcotics in the Andean countries would be $443 million.

Programs that foster democratic transitions -- through independent media, pluralistic political parties, and voter education and election monitoring -- and that promote rule of law, good governance and human rights in nondemocratic nations would be funded at $1.45 billion.

It proposes $486 million for educational and cultural exchanges and $359 million for public diplomacy programs to foster mutual understanding between the United States and other countries and to combat terrorism.

Under the proposal, the Peace Corps would receive $334 million.

Multilateral development banks would get a boost to $1.5 billion.

The proposed budget calls for $1.3 billion for food aid.

Africa would receive a total of $4.4 billion in aid funding.

A fact sheet on the foreign aid budget request and a transcript of Tobias' speech are available on the State Department Web site.

This story has been posted in the following forums: : Headlines; Presidents - Bush; Budget; Appropriations