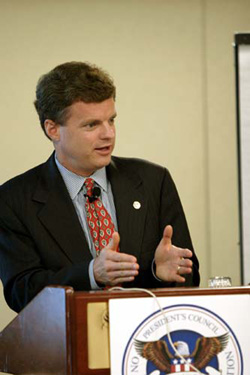 "What we do with our parks over the next decade will affect how our children and grandchildren enjoy and learn from them and how America's evolving story and heritage are safeguarded. Let's hope our generation meets the challenge to preserve this collective consciousness of our nation and has something grand to celebrate at the 100th anniversary of our national park system. " John Bridgeland of Ohio was the first head of President George W. Bush's USA Freedom Corps.

By John Bridgeland and Curt Buchholtz

As our nation prepares for the centennial of its national park system, we should take stock of our past and future stewardship of these natural, historic and cultural treasures that attract 287 million visitors a year. This week, the president's release of a multibillion-dollar centennial plan will be an important step in determining what national park system we celebrate in 2016.

Nearly 100 years ago, President Theodore Roosevelt welcomed governors to a White House conference on the conservation of natural resources to prevent "the advent of the woodless age." Economic progress threatened to exhaust our natural resources, prompting government to place large tracts of land in federal custody. By 1916, Congress had created the National Park Service to ensure that parks such as Yellowstone and Glacier would remain unimpaired for the enjoyment of future generations. By 1933, President Franklin Delano Roosevelt had added more than 50 military parks and monuments such as Yorktown and Gettysburg to the system.

A decade before the 50th anniversary of the park service, President Eisenhower launched a 10-year, billion-dollar project to enable more Americans to utilize our national parks. His "Mission 66" resulted in the inclusion of 78 additional park units, the completion of the Gateway Arch; the Blue Ridge, Colonial and George Washington Memorial Parkways; and the construction of more than 100 new visitor centers to promote tourism. At the 50th anniversary of the National Park Service, there were achievements to celebrate and lessons to be learned.

Today, the national park system consists of 390 areas covering more than 84 million acres in 49 states and territories. Yet this system suffers from a significant funding shortfall every year that affects the preservation of historic buildings, cultural artifacts, native species and beloved park rangers that give families guided tours of places like Mammoth Cave, Antietam and the Grand Canyon. We can do better as a nation and help is on the way.

In a tight budget environment during a costly war, President Bush and Interior Secretary Dirk Kempthorne are nevertheless coming forward with an ambitious 10-year, $3 billion "Centennial Initiative & Challenge" that renews the nation's commitment to our parks and fosters accountability, innovation and partnerships. The federal government will make a significant new investment of $258 million for park operations, challenge private philanthropy with the lure of additional federal support and launch signature initiatives that connect citizens and communities to our national parks in innovative ways.

Park business plans with clear metrics will ensure new federal investments are made wisely to protect natural and historic resources, maintain facilities and provide more rangers. These will include 3,000 more seasonal rangers, who enhance the educational and recreational experience of visitors. On top of a strong new federal commitment, the centennial plan challenges philanthropy to attract an additional $100 million each year for 10 years with a dollar-for-dollar match. This is a match worth making.

National parks are dramatic outdoor classrooms and new technologies can deepen educational experiences. Imagine students visiting Gettysburg National Military Park downloading lectures on their iPods from historian David McCullough to learn of Joshua Chamberlain's textbook maneuver at Little Round Top that saved the Union Army; paleontologists teaching awestruck schoolchildren the scientific method as they take them on a hands-on or virtual dinosaur dig; or park visitors learning how bacteria from the bubbling pools of Yellowstone made mapping the human genome possible.

New efforts will strengthen the call to action to encourage up to 1 million volunteers every year to join the more than 125,000 volunteers who work in our parks to help maintain trails, catalogue species and further enhance visitor experiences.

The idea to create a national park system is one of America's greatest innovations. It prompted more than 100 nations to create 1,200 national parks and preserves worldwide.

What we do with our parks over the next decade will affect how our children and grandchildren enjoy and learn from them and how America's evolving story and heritage are safeguarded. Let's hope our generation meets the challenge to preserve this collective consciousness of our nation and has something grand to celebrate at the 100th anniversary of our national park system.

John Bridgeland is vice chairman of the Earth Conservation Corps and CEO of Civic Enterprises. Curt Buchholtz is president of the National Park Friends Alliance and executive director of the Rocky Mountain Nature Association.

This story has been posted in the following forums: : Headlines; Figures; USA Freedom Corps; Parks; Environment