Eagleton revealed as source for "Amnesty, Abortion and Acid" 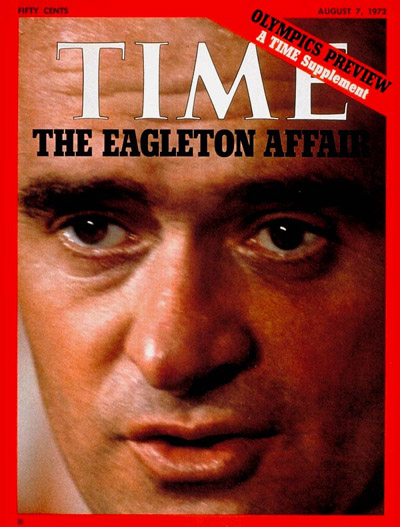 On April 25, 1972, George McGovern won the Massachusetts primary and journalist Bob Novak phoned Democratic politicians around the country, who agreed with his assessment that blue-collar workers voting for McGovern did not understand what he really stood for. On April 27, 1972 Novak reported reported in a column that an unnamed democratic senator had said of McGovern: "The people don’t know McGovern is for amnesty, abortion and legalization of pot. Once middle America - Catholic middle America, in particular - finds this out, he’s dead." The label stuck and McGovern became known as the candidate of "amnesty, abortion and acid." Novak was accused of manufacturing the quote and rebut the criticism, Novak took the senator to lunch after the campaign and asked whether he could identify him as the source but the senator said he would not allow his identity to be revealed. "Oh, he had to run for re-election. The McGovernites would kill him if they knew he had said that," says Novak. On July 15, 2007, Novak disclosed on Meet the Press that the unnamed senator was Thomas Eagleton. Political analyst Bob Shrum says that Eagleton would never have been selected as McGovern's running mate if it had been known at the time that Eagleton was the source of the quote, Eagleton's electro-shock treatments would never have become an issue in the 1972 presidential campaign, and McGovern would have remained politically viable carrying perhaps eight to ten states against Richard Nixon in 1972.

Eagleton revealed as source for "Amnesty, Abortion and Acid"

With another disclosure, Novak bedevils the dead

The “Prince of Darkness” is back.

Robert Novak, the pugnacious and widely syndicated conservative columnist, turns out the light on former Sen. Tom Eagleton of Missouri in his new book, The Prince of Darkness: 50 Years Reporting in Washington. And he does it in typical Novakian style.

In detailing the 1972 presidential campaign, Novak tells a story, much of which has already been publicized, of a column he wrote early that year that contained an anonymous quote from “one liberal senator” who warned that Democratic candidate George McGovern’s surging popularity was based on public ignorance of his stands on hot issues.

“The people don’t know McGovern is for amnesty, abortion and legalization of pot,” the senator told Novak. “Once Middle America — Catholic Middle America, in particular — find this out, he’s dead.” The amnesty controversy involved those who evaded the military draft during the Vietnam War.

Novak then labeled McGovern the “Triple A” candidate who backed “amnesty, abortion and acid.” The label stuck. Novak later was criticized in a book accusing him of manufacturing the quote.

To rebut the criticism, Novak took the liberal senator to lunch after the campaign and asked whether he could identify him as the source. No way, the senator said. He was seeking re-election in 1974 and would be crucified by McGovern Democrats if he was revealed.

Of course, neither Novak nor the liberal senator could have predicted that the senator would become McGovern’s running mate later that year.

Thirty years later, as Novak was writing his book, he wrote to the senator and again sought permission to identify him. “Dear Bob,” the senator wrote back, “what I told you … was off the record, and I still consider it that way.”

The story should end there, but it doesn’t. Eagleton died March 4, 2007, “relieving me of the need to conceal his identity,” Novak writes. At the time he gave Novak the quote, Eagleton was 42 and in his fourth year as a senator.

Not surprisingly, some of Eagleton’s former aides are livid. They say Eagleton never authorized his name to be attached to a quote that makes him look duplicitous.

“Reprehensible,” barked Woody Overton, who spent 10 years with Eagleton as his state director. Eagleton, Overton said, isn’t around to defend himself.

Asked about the story at a recent breakfast with journalists, Novak acknowledged that attaching Eagleton’s name to the quote was “a judgment on my part.”

If there’s any disagreement, Novak said, Eagleton could settle it with him in heaven “or wherever we end up.”

Now you understand where Novak’s nickname comes from.

This story has been posted in the following forums: : Headlines; Shriver; History; Election1972