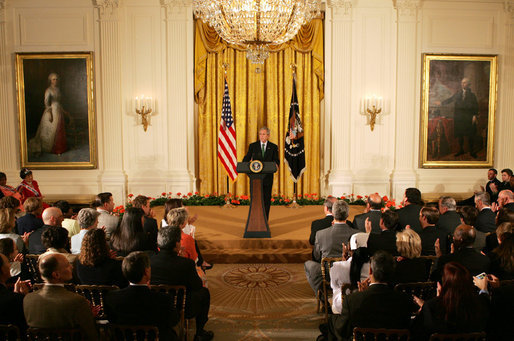 At the event, held in the East Room of The White House, the President formally sent off the 33 Peace Corps Volunteers who are leaving tomorrow for their term of service in Guatemala, and thanked them for their willingness to serve. The Peace Corps Country Directors, who represent 65 of the Peace Corps programs, are currently in Washington to attend a worldwide Country Director conference.

In his remarks, President Bush said, “Forty-seven years ago, President John F. Kennedy in the Rose Garden sent the first team of Peace Corps Volunteers to Africa. And in the intervening years, more than 190,000 Peace Corps Volunteers have carried our country's great spirit of generosity and compassion throughout the world. Laura and I met with Peace Corps Volunteers in Ghana recently…it is exciting to be with those good souls who are motivated to go help, and in so doing it really is the best foreign policy America could possibly have.”

National Volunteer Week is commemorated from April 27 through May 3, 2008 and provides an opportunity for all Americans to recognize and celebrate the important work that volunteers do every day throughout the United States and encourages citizens to explore new volunteer opportunities.

Peace Corps Director Ron Tschetter, who was present at the event, commented, “The President has been an ardent supporter of the Peace Corps, not only by supporting the agency’s largest budget in history, but also through his personal touch in meeting with individual Volunteers when he travels. It is an honor for Peace Corps Volunteers to be recognized formally by the President during National Volunteer Week.”

More than 4,500 Peace Corps Volunteers have served in Guatemala since the arrival of the first group in 1963, and they have long provided community development assistance in rural and poor areas. Today, approximately 175 Peace Corps Volunteers work with public and private institutions, providing assistance through projects in agriculture, environment, health, municipal development, and youth sectors.

This story has been posted in the following forums: : Headlines; Headquarters; Country Directors; Presidents - Bush; COS - Guatemala