An Interview with Elaine Chao 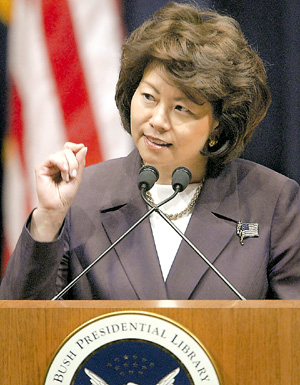 An Interview with Elaine Chao

During any administration, high-ranking officials come and go. Not so for Labor Secretary Elaine Chao, the only Cabinet secretary to serve during both of President Bush’s terms.

Chao, who emigrated from Taiwan as a child, has had an extensive career in government and banking, as well as heading the United Way. She’s also one half of a true Washington power couple with her husband, Senate Minority Leader Mitch McConnell (R-Ky.).

The Hill sat down with Chao last week to hear her unique perspective on the Bush administration as it winds down.

Q: You have served under President Bush for both of his terms, which is unusual in this or any administration. What has motivated you to remain when so many others have moved on?

I feel very deeply about the honor of being in public service. I’m an immigrant to this country. I knew so little of how this country worked when I first arrived here. The opportunity that I’ve been given by this great country compels me in everything that I do to ensure that these opportunities are available to others who are less fortunate, who are outside of mainstream America, who are vulnerable, who do not understand this society.

Q: From that perspective, what are some of the most noteworthy differences you’ve observed within the administration since you first took office?

Q: Have you ever considered stepping down? Was there any question of you not staying for his second term?

We have no job security in these positions. We serve at the pleasure of the president. I’m grateful to President Bush for giving me the opportunity to serve the American public in his administration. ... The opportunity to serve your country is a great honor. It doesn’t come at a time of your own choosing. In our positions … we can only participate when it’s time for our team to be on the field.

Q: What would you rate as your greatest successes and most frustrating experiences as secretary?

I’ve had the unique perspective of having worked in the private, the public and the nonprofit sectors. My whole life has been geared toward helping all three sectors work together for the benefit of our population. I have seen the limitations of any one sector and it’s really important that all three sectors work together to tackle the truly intractable problems that we have in our society. …

I think we need more progress on the workforce investment system. We are a very compassionate nation. We care about those within our midst who have fallen upon vulnerable times. ... We proposed a package of reforms for the reauthorization of the Workforce Investment Act. We have not been successful, but we have sparked a discussion within the system.

Q: Was it challenging to win over the career employees at the department when you first became secretary, and how would you characterize your relationship with your workforce?

Not at all, no. In fact, one of the things that I did when I first came in was to call a coffee klatch … for the career professionals. I wanted to thank them for holding the department together during the transition. I thought they might be curious about me. I was curious about them. … In the tenure that I’ve been here, I’ve been very impressed with the professionalism of the career employees.

Q: What has changed about your job since the Democrats took over control of Congress?

Our goal here is always to try to work on a bipartisan basis with everyone. Our issues are very difficult. They’re highly emotion-laden. I don’t think we disagree on the goals. We want to help improve the competitiveness of our workforce in a globalized 21st-century economy. We want to improve the health and safety of our workers. We want to ensure the long-term financial retirement security of our workers and retirees. But there are different ways to go about doing it.

Q: Does your marriage to Senate Minority Leader Mitch McConnell provide you with a unique point of view on the relationship between the legislative and executive branches?

I think it probably does, but not as much as you’d think. I have great respect for the legislative branch … but I’m not so sure that comes from my husband. I’ve been in public service before and I’ve had a career of my own before I married him. … We have independent careers and professional lives.

Q: If Sen. John McCain (R-Ariz.) wins the presidential election and asks you to serve in his administration, how would you respond?

This is my third and most likely final turn in the federal government. … There’s so much talent within the Republican ranks. I’m sure there’ll be others who have the experience to step up to the plate.

This story has been posted in the following forums: : Headlines; Directors - Chao; Department of Labor; Figures; Directors