Sargent Shriver's Boyhood Home on the Market in Baltimore 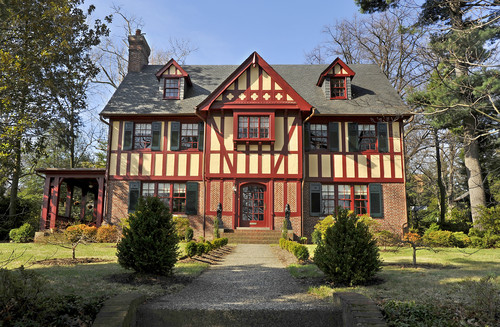 Democratic politician Sargent Shriver once lived in the house as a boy. The Tudor's interior oak and heart-of-pine floors, plaster walls and decorative moldings, as well as the exterior stucco and timbers, have been restored. Sargent Shriver was the Founding director of the Peace Corps.

Sargent Shriver's Boyhood Home on the Market in Baltimore

It has been, said Robert Kean, a labor of love to restore the stately home set back from the road in Roland Park.

The 1915 Tudor revival was in need of an overhaul when he and his wife, Kim Lacey, moved in three years ago. But the structure was sound.

"The walls are three bricks deep," he said.

Kean, who has rehabbed several homes, did much of the work himself, tearing out the office enclosure to reveal the patio, restoring original windows and landscaping the property.

Keeping the historical integrity of the house, he didn't move walls. The butler's pantry's long stretch of glass-front cabinets is intact.

"I can get all my china in there, which is nice," Lacey said.

Now, the couple said, they're hoping to find another house they can rehab.

About the house Democratic politician Sargent Shriver once lived in the house as a boy. The Tudor's interior oak and heart-of-pine floors, plaster walls and decorative moldings, as well as the exterior stucco and timbers, have been restored.

The house has five bedrooms, four bathrooms and a powder room. Sunlight pours into the first-floor rooms, which are characterized by high ceilings, French doors and large windows. The living room has a wood-burning fireplace between French doors leading to the terra-cotta tile patio that wraps around to the rear of the house.

The owners updated the electrical system and plumbing, and redid the kitchen with maple cabinets, solid-surface counters, a breakfast bar and upgraded appliances that include a wine chiller and a double-oven.

A wide stairway leads upstairs from the foyer; the kitchen's back stairway was rebuilt along with the roof and rafters above it.

Features On the second floor, the master bedroom suite has three deep closets, a deck and a tile bathroom with separate shower and tub. Two guest bedrooms share a bathroom that has a deep tub.

Two more bedrooms, a bathroom with a clawfoot tub and storage are on the third floor. Though they added air conditioning, the couple refurbished and uses the original whole-house fan on summer nights.

"When the temperature cools at night, it's lovely to have the air coming through," Lacey said.

This story has been posted in the following forums: : Headlines; Directors - Shriver; Figures; Directors