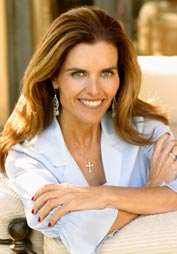 "I am a child of Alzheimer's. For many years, my father, Sargent Shriver, would testify before Congress for increased funding for his beloved Peace Corps -- and for all the War On Poverty programs he started. My father was an idealistic, intelligent, optimistic public servant, sharp and witty, his mind a beautifully-tuned instrument that left people in awe and inspired. That was then...today he doesn't know my name or who I am. When my Dad was diagnosed in 2003, I felt confused, powerless and alone. There was little information -- and even less hope. My mother, my four brothers and I felt we were entering a world that was terrifying and incomprehensible. Like cancer, people didn't talk about Alzheimer's back then -- they whispered about it. It was a diagnosis shrouded in shame." Maria Shriver, daughter of Peace corps Founding Director Sargent Shriver, is a writer, journalist and first lady of California.

I am a child of Alzheimer's. For many years, my father, Sargent Shriver, would testify before Congress for increased funding for his beloved Peace Corps -- and for all the War On Poverty programs he started. My father was an idealistic, intelligent, optimistic public servant, sharp and witty, his mind a beautifully-tuned instrument that left people in awe and inspired. That was then...today he doesn't know my name or who I am. When my Dad was diagnosed in 2003, I felt confused, powerless and alone. There was little information -- and even less hope. My mother, my four brothers and I felt we were entering a world that was terrifying and incomprehensible. Like cancer, people didn't talk about Alzheimer's back then -- they whispered about it. It was a diagnosis shrouded in shame.

We struggled with learning about medication and care-giving -- with issues of our father's diminishing independence. We tried to explain to him why he could no longer drive or do many of the things he loved most in this world, like giving speeches on public service. When the invitations came in, we would just send his regrets. When people look at Alzheimer's families from the outside, they see the dependent, childlike parent now cared for by their offspring -- and it seems that the roles are simply reversed. Not so. The truth is, no matter what our age, we feel like children. No matter who you are, what you've accomplished, what your financial situation is -- when you're dealing with a parent with Alzheimer's, you yourself feel helpless. The parent can't work, can't live alone, and is totally dependent, like a toddler. As the disease unfolds, you don't know what to expect. As a doctor once told me, "Once you've seen one case of Alzheimer's...you've seen one case of Alzheimer's."

I wrote a book called, What's Happening to Grandpa? At the time, I said I wrote it to help my children understand what was happening. In truth, I wrote it to explain Alzheimer's to myself. But when I wanted to turn it into a television special -- to shine some light on this subject -- no one was interested. I was told Alzheimer's wasn't big enough -- it was just "an old person's disease."

That was the wakeup call Baby Boomers needed. After all, we are the generation who believed our brain-span would match our life-span. But now we were confronted with an epidemic -- an epidemic that wasn't just happening to "them." An epidemic that would happen to "us," too. And that scared us to death. All of a sudden, it seemed to me that people really started paying attention, and Alzheimer's became front-page news.

On Mother's Day, May 10th, HBO will air and I will executive produce the most comprehensive television event ever about Alzheimer's disease called The Alzheimer's Project -- focusing on the cutting-edge science, the issues of care-giving, how one lives with the disease, and the children and grandchildren of Alzheimer's.

It is time for this attention. Because someone is diagnosed in this country with Alzheimer's every 70 seconds. And fully one third of Americans have a direct experience with this disease. The epidemic is growing.

Seventy percent of people with Alzheimer's live at home, cared for by family and friends. There are nearly 10 million Americans providing 8.4 billion hours of unpaid care to people with Alzheimer's disease or other dementias - valued at $89 billion. And believe it or not, there are getting to be almost as many kids actually "babysitting" a grandparent with Alzheimer's at home as kids babysitting children. That's where we are. Of course, most of the unpaid care-giving is done by women -- but luckily, that's also changing. Increasingly, men are stepping up to the plate.

Which brings me back to my brothers. I am in awe of what they do. My brothers take my Dad out to the Orioles games. They sit and joke with him, talk guy-talk to him. They take him to their kids' piano recitals and basketball games. Former Peace Corps volunteers will see him, know he has Alzheimer's, and still come up to him. They take his hand, and tell him stories. It doesn't matter that he doesn't know who they are -- or that he doesn't even remember the Peace Corps. What matters is that I know for sure he's comforted by the warmth of the human connection. I know that all in all, my family is one of the lucky ones. We're truly blessed we're able to keep our Dad at home. We're blessed to have the resources to pay patient and loving caregivers, who help us take care of our Dad and make him feel loved. I'm in awe of them, too. But millions of others aren't as lucky. Many are forced to quit jobs to stay home -- or go through the wrenching process of sending the parent away to a facility -- feeling judged and mortified and ashamed that they can't care for their loved one themselves. For so many, the financial, emotional, and spiritual cost is too much to bear.

My hope is that as the veil is lifted, as information and funds are available, they'll see that they're not alone -- that there's nothing to be ashamed of, that there's hope out there, because we're finally making Alzheimer's a national issue. We have to put Alzheimer's on the front burner, or it will not only devour our memories -- it will cripple our families, devastate our health care system, and decimate the legacy of our generation.

At the age of 93, my Dad still goes to Mass every day. And believe it or not, he still remembers the Hail Mary. But he doesn't remember me...Maria. I'd be lying if I didn't admit that that still makes me cry. But even so -- in the past 6 years, I have gone from hopelessness to hope. I have hope, because things are changing.

I've seen inter-generational day care centers where toddlers and Alzheimer's patients spend the day together. They eat together, they dance together, and have story-time together. It's quite moving to behold.

And we're building inter-generational playgrounds in California, so Sandwich Generation people like me -- who are taking care of kids and parents -- can go to one place with both of them.

I've also gotten hope from my own children. I watch how they talk and laugh with my father. They don't get bogged down in the sadness. My kids and my nieces and nephews all accept my Dad for who he is today -- and that's been a lesson for me.

I have hope because public hearings on The Hill -- high-profile work like the Alzheimer's Study Group report -- TV shows and books...are bringing Alzheimer's out of the back room and into the living room of our nation.

And most of all, I have hope that Congress will do the right thing, the courageous thing -- and use new The Alzheimer's Study Group's report as a roadmap for the real legislation we need, to stem the tide of what promises to be a horrific epidemic -- the disease itself, and its impact on our families and our health care system.

Many of us know of someone who is struggling with this disease in their family. We have seen the pain in the eyes of someone who has to watch powerlessly as it takes their loved one down and sometimes even tears at the fabric of the family itself. It will take courage to implement these bold recommendations. But I know that if we make that major commitment to brilliant scientists like the ones I have met in laboratories around the country -- they will produce the drugs to slow Alzheimer's down -- and perhaps even prevent it.

So let's act now and do what we have to do -- to spare millions of Americans in the future the pain of watching someone they love die a mysterious death on the installment plan. If we do -- I am convinced -- we Baby Boomers will be the generation who tells our grandchildren that believe it or not, there once was a time when there was no cure for Alzheimer's.

This story has been posted in the following forums: : Headlines; Friends; Maria Shriver; Sargent Shriver