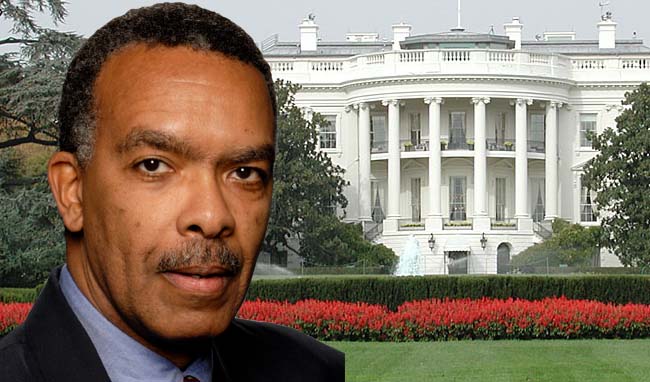 "AID had asked us to look for ways to provide what we call rapid response grants, trying to respond to the immediate needs of Iraqi citizens in the towns and cities where we are working. In the case of Basra, we were able to tour a couple of different health facilities. And it immediately became apparent that because of the looting that had taken place after the fall of Saddam Hussein and the many, many years of neglect n the south in terms of Baghdad basically abusing the citizens of the south--of course, as you know, that's primarily a Shia population--there were enormous needs. And so we very quickly provided $20,000 to refurbish and rehabilitate and re-equip a clinic which serves 50,000 people. So that was a major step forward." President Obama named RPCV Aaron Williams the Director of the Peace Corps on July 14, 2009.

As Ron said, he spent most of his time in our month in Iraq in Baghdad. And while Ron was in Baghdad working with Coalition officials, with Ambassador Bremer, and with the military authorities, the other members of our four-person team, we were in the south, starting up our activities with local governance.

AID asked us to start off in Basra. That was the first permissive area at the time we arrived in end of April and early May. And we went into Basra and we spent some time in consultation with military and civilian authorities. And we had a chance to meet extensively with the local Iraqi council that was there, looking at the affairs in Basra City.

And through that we put together our initial work plans. We also were very fortunate, because while we were in the process of our initial conversations and briefings with the various parties, it quickly became apparent that there was a need for a senior expert to provide assistance in terms of municipal advice in city planning, city management, et cetera.

And we had on our initial team a person who was an experienced city manager from the United States, someone who's worked in Latin America, and Asia and Africa with municipal development. And that person we immediately assigned by in this case and the case of Basra, which is controlled by the British authorities. He immediately became senior advisor to the commanding general in the area, working with the local Iraqi officials and with the civilian officials. In the south I might add. Ambassador Olsen is the CPA lead person there. And so he's also working with that person.

so right off the bat we were able to put someone in place who had a tremendous amount of experience in municipal development and city management.

At the same time we also opened up our Basra office, because we decided early on that it was important to have offices in the key capitals in the regions. And we wanted to be co-located with both the civilian authorities under Ambassador Bremer, both in terms of Basra, Al Hila, which I'll talk about in a minute, in Baghdad obviously where Ron was working, and in the north in Mosul and Kirkuk.

We opened up our office in Basra. We've got our initial technical team, which is working there now. And as you can imagine, as look at and assess the kinds of needs that a city the size of Basra, the second largest city in Iraq needs, we've come up with some very specific technical assistance requests. And this of course worked out very well, because we had our senior advisor there. So we've deployed people who are solid waste management, water engineers, people who have experience in managing power companies in the United States and elsewhere in the world.

So we think we have a very good team in place that's able to provide immediate assistance to the authorities and to the Iraqi citizens in that city.

At the same time, AID had asked us to look for ways to provide what we call rapid response grants, trying to respond to the immediate needs of Iraqi citizens in the towns and cities where we are working. In the case of Basra, we were able to tour a couple of different health facilities. And it immediately became apparent that because of the looting that had taken place after the fall of Saddam Hussein and the many, many years of neglect n the south in terms of Baghdad basically abusing the citizens of the south--of course, as you know, that's primarily a Shia population--there were enormous needs. And so we very quickly provided $20,000 to refurbish and rehabilitate and re-equip a clinic which serves 50,000 people. So that was a major step forward.

And as the doctors that we talked to, the ones who run the clinic, as they told us, they said this is the first time in ten years that anyone has come in and tried to provide assistance to help the people that are serviced by this health clinic. So, it was really an important step forward.

In Umm Qasr, which of course is important because Umm Qasr is a port town, a very important port for bringing materials in and shipping things out of Iraq, in Umm Qasr, we sat down with the military governor and with the Umm Qasr council, and came up with a plan for providing assistance. At the time we arrived there it was the end of the school year, and education was very much on the minds of the parents of Umm Qasr. And they asked us to look for ways to rehabilitate the 20 schools that are in the Umm Qasr area.

And again, we toured some of these schools, and quite frankly, I don't want to be course, but some of the schools that we toured and looked at you wouldn't want anyone to set foot in that school, let alone young children who are expected to receive an education there. Horrible conditions. Again a graphic demonstration of the abuse that the Shia population had received over many, many years from Saddam Hussein's regime. No water, no electricity, et cetera.

So we agreed to refurbish all the schools in the Umm Qasr area. And we're moving forward with that grant at this point in time .

Moving a little further north into the central area, Al Hila. Al Hila is also in the area where Babylon is located.

And one thing I might just mention, I think one of the real resources that Iraq will have in the future in terms of tourism development, once it becomes a stable country. And that is Babylon. Babylon is an incredible site, that for some reason under that terrible dictatorship they allowed the National Archeological Institute to really restore Babylon. So you're going to see something, and those of you who at some point in time, hopefully you'll have a chance to travel there, will see an extraordinary site. It's going to be an important source of revenue generation, employment, and something that the Iraqi people will be proud of in the future.

Anyway, in the Al Hila region, where Babylon is located, we of course again proceeded to consult with the local authorities, both military and civilian. We talked with the local Iraqi officials, and we tried to identify ways to provide the appropriate technical assistance. Again, we have opened up an office there. We are now providing a technical team in the various areas that we've identified where there is need, and again basic services being crucial: water, power, solid waste management, sewage systems, et cetera.

And we also have started to move out the other governant capitals, the other six cities in that area. And again we're looking for ways to provide rapid-response grants, to provide very targeted technical assistance in response to what the leadership in that area believes that they need.

Just another story to point out some of the things that we're involved with at the personal level. We met with the head of the electric company in Al Hila. And this is a man who had been trained, I think he had been trained originally in Iraq and then later in Jordan. And he said that he had tried everything despite the lack of resources to run an efficient power company in Al Hila. But frankly, he said, he was at the end of his rope. There was nothing else he could do. He had not been exposed to the outside world, he hadn't had a chance to find out what modern management techniques were, what modern engineering was in terms of the electric company in that particular city. And he was desperate to look at the outside world, to find out, to have information, to reach out to his colleagues in the Middle East, in the United States.

And so he felt that really one of the wonderful things that was going to happen now because of the liberation of Iraq was that he was going to have a chance to modernize and improve provision of electrical service in that town. So I think this is again a chance on a one-on-one basis to really make a difference in terms of local governance and service delivery.

And then finally, in the month of June, we have started working in the north. As you know, of course the north has had some degree of autonomy for quite a number of years. And so we're now looking at ways to provide again very targeted specific technical assistance in the areas that we're working in, Kirkuk and Mosul. And we're looking for ways to provide that to the government that's already in place in the north.

I think that overall, in a very short period of time, in less than two months, we've been able to deploy a significant number of experts. We've looked for ways to be responsive to the needs that the Iraqi citizens have indicated, that are paramount in terms of restoring services and providing assistance and moving towards a more effective governance structure, and also at the same time to provide basic services to make lives better for the average citizen there.


When this story was posted in July 2009, this was on the front page of PCOL:

This story has been posted in the following forums: : Headlines; Directors; COS - Dominican Republic; Headquarters; Iraq; Governance; USAID