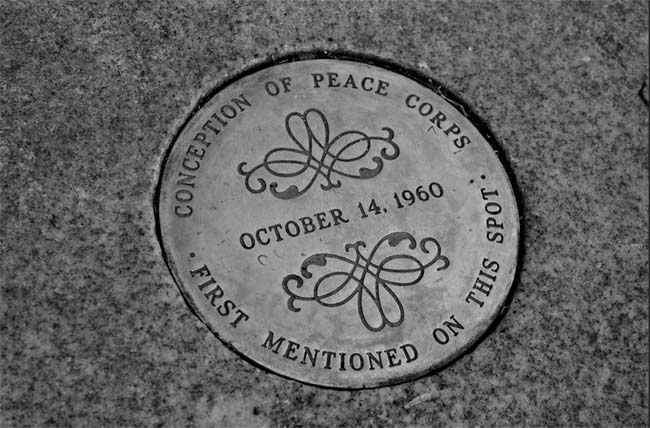 Oct. 14, 1960: In a 2 a.m. impromptu speech, presidential candidate and then-Sen. John F. Kennedy calls on students at the University of Michigan to volunteer to serve for one to two years in the developing world. Within weeks, students organized a petition drive and gathered 1,000 signatures in support of the idea, which became the Peace Corps.

Caption: In 1961, President John F. Kennedy hands a pen to brother-in-law Sargent Shriver after signing legislation at the White House giving the Peace Corps permanent status. Kennedy joshingly praised Shriver, head of the Corps, as "one of the most effective lobbyists Washington has seen."

It all started on Oct. 14, 1960, after a speech by President John F. Kennedy. Next year, the Peace Corps celebrates 50 years.

Oct. 14, 1960: In a 2 a.m. impromptu speech, presidential candidate and then-Sen. John F. Kennedy calls on students at the University of Michigan to volunteer to serve for one to two years in the developing world. Within weeks, students organized a petition drive and gathered 1,000 signatures in support of the idea, which became the Peace Corps.

March 1, 1961: President Kennedy signs Executive Order 10924, providing for the establishment and administration of the Peace Corps on a temporary pilot basis.

THEN AND NOW: People inspired to volunteer

June 1961: Training for the first group of Peace Corps volunteers is conducted at U.S. colleges, universities and private agencies.

Aug. 30, 1961: The first group of Peace Corps volunteers, Ghana I, arrives in Accra. They will serve as teachers.

Sept. 22, 1961: Congress approves legislation for the Peace Corps, giving it the mandate to "promote world peace and friendship" through a mission statement that endures to this day.

1966: More than 15,000 trainees and volunteers are serving in the field. Historically, this is the highest number of Peace Corps volunteers.

September 1966: Lillian Carter, the mother of President Carter, departed for Peace Corps service at age 68 as a public health Volunteer in India, one of many who set the standard for older volunteers for generations to come.

1979: Peace Corps closes its post in Afghanistan. The Peace Corps entered Afghanistan in 1962, and 1,652 volunteers served in the country until the program ended in 1979, when a Soviet-sponsored regime took control of the country.

1981: Peace Corps becomes an independent federal agency and is no longer a part of ACTION.

1985: For the first time since Peace Corps' inception, there are more women entering service than men. Women continue to be in the majority until present day.

1990: The first group of Peace Corps volunteers to serve in Central and Eastern Europe depart. The first countries were Poland, Hungary, the Czech Republic and the Slovak Republic.

June 1993: The first group of English teachers leave for China.

2005: For the first time in the agency's history, volunteers are deployed domestically when Peace Corps Response aids the Federal Emergency Management Agency's relief operations in the Gulf Coast region after hurricanes Katrina and Rita.

2009: After the 1994 genocide, Peace Corps returns to Rwanda, where volunteers begin working in secondary education and on prevention, care and treatment of HIV/AIDS.

2010: Peace Corps reopens three historic programs in Sierra Leone, Indonesia and Colombia and surpasses the 200,000 mark in total Americans who have served overseas with Peace Corps.

This story has been posted in the following forums: : Headlines; 50th; Shriver; Presidents - Kennedy