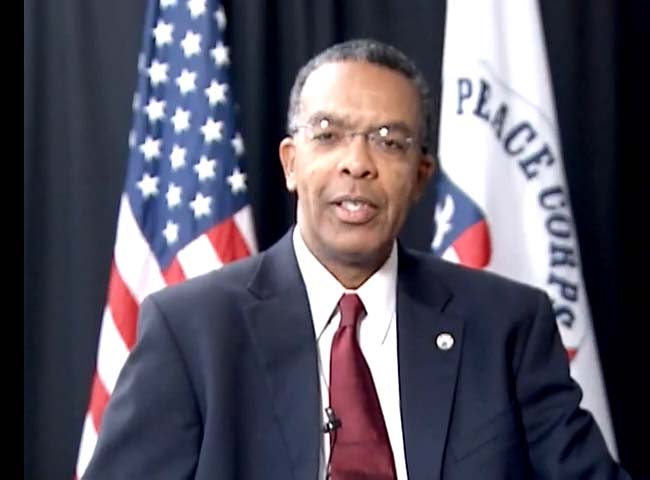 "We do have bipartisan support," he said. "And I think that we're going to be OK."

The head of Peace Corps came to Winston-Salem Friday with a simple message for area youth: Join the Peace Corps.

Corps Director Aaron Williams visited the city with Sen. Kay Hagan, D-N.C., and said he hopes to increase minority interest in the group, which sends U.S. volunteers all over the world, often to poor, remote villages.

Williams was pitching his message early Friday, telling seventh- and tenth-graders at Paisley IB Magnet School to go home and tell their parents they want to join.

They'll have to be patient. The corps, which had its 50-year anniversary earlier this year, requires a college degree for most overseas assignments. But Paisley, a magnet school serving sixth- through 10th-graders with an honors International Baccalaureate program, will start a partnership with the Peace Corps, Principal Gary Cone said.

It is signing up for the Coverdell World Wise Schools program, which puts students in touch with Peace Corps volunteers overseas through letters, emails, pictures and videos.

The program fits well with Paisley's international focus - the school holds an international festival each year - and goal of widening students' world view, Cone said. It also dovetails with service requirements. Students can graduate Paisley without community service, but to stay in the IB program they must complete 20 service hours in sixth grade, and the figure goes up from there, Cone said.

Cone called the World Wise program "a perfect alignment with our curriculum." Williams said the feeling is mutual.

"You're doing the kind of thinking that we like to see in the Peace Corps," he told Paisley 10th-graders. "Really out-of-the-box thinking."

Williams and Hagan also visited Winston-Salem State University, where Williams called for an increase in minority participation in the corps. Twenty percent of the roughly 9,000 volunteers the Peace Corps has in 77 countries are minorities, according to corps statistics, and Williams said that's "too low."

He promised a larger recruitment push in minority communities, and Anderson said he's looking to raise the Peace Corps profile at historically black colleges and universities, such as Winston-Salem State.

Williams and Hagan both extolled the virtues of service, with Hagan telling the group at WSSU that two years with the corps "is probably worth as much as your college education."

"We do have bipartisan support," he said. "And I think that we're going to be OK."

Williams and Hagan also spoke briefly Friday about Emily Balog, a Peace Corps volunteer from Burlington who died this week in a wreck while serving in Paraguay.

"We lost a member of our beloved family," Williams said, adding that he met this week with Balog's parents.

"I can see in them why she was such an outstanding volunteer."


When this story was posted in December 2011, this was on the front page of PCOL:

This story has been posted in the following forums: : Headlines; Directors; COS - Dominican Republic; Headquarters; Budget; Appropriations; Congress