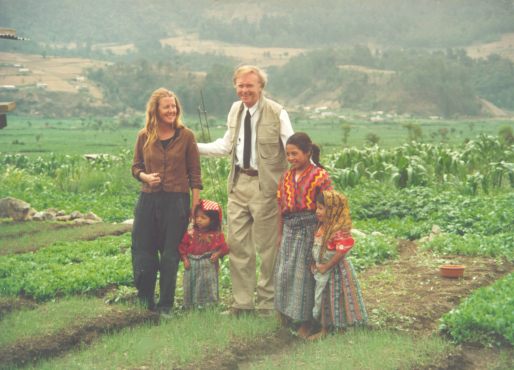 An affiliation between Paul D. Coverdell and GC&SU began in the latter half of 1990 when former GC&SU president, Edwin Speir, signed an agreement to begin the Peace Corps Fellows/USA Program at Georgia College. Coverdell later signed a gift agreement at Georgia College & State University in the fall of 1996, donating his Peace Corps papers to Ina Dillard Russell Library.

Coverdell, being impressed with GC&SU's mission, returned to campus in June of 1999 in order to officially donate his United States Senate papers to GC&SU's library. In addition to Coverdell's Peace Corps Papers, the library currently holds approximately 150 linear feet of boxes containing documents from Coverdell's service in the United States Senate.

Paul D. Coverdell was born on January 20, 1939 in Des Moines, Iowa. He received a BS in Journalism from the University of Missouri in 1961. He was awarded two honorary degrees: a Doctor of Law from Mercer University and a Doctor of Business Administration from Piedmont College. He was married to Nancy Nally Coverdell of Georgia.

Soon after finishing college, Coverdell began service in the Army in 1962 as a Captain in Okinawa, Taiwan, and Korea. After his military service, Coverdell moved to Atlanta in 1964 and worked with his father in the founding of Coverdell & Co. Inc., an insurance marketing business. Paul Coverdell was named company president in 1965 and would later become CEO of the family business.

In January 1989 Paul Coverdell was nominated by President George Bush to serve as Director of the Peace Corps, due in part to his lifelong commitment to humanitarian efforts in the state of Georgia. President Bush swore Coverdell into office in an Oval Office ceremony on May 2, 1989. That same year Coverdell stepped down as president of Coverdell and Co. Inc, in order to devote all of his energy to his service at the Peace Corps.

While Paul Coverdell served as director of the Peace Corps, the world saw great political change that affected the agency's efforts. Chinese students protested the Communist government in Tienanmen Square just as Coverdell became Peace Corps Director in 1989. The Tienanmen Square Massacre effectively postponed the Peace Corps' hard won agreement to send volunteers to China with the China One program. The Cold War came to an end in 1989 with the reunification of Germany and the fall of Communism, a revolution that allowed the Peace Corps to enter countries that had not previously welcomed the assistance of Western governments. The Persian Gulf War began in the summer of 1990, with the United States sending over 400,000 troops from late 1990 through early 1991 and affecting volunteers serving in Muslim countries.

In September 1991, Coverdell resigned as director of the Peace Corps to pursue a Republican seat in the United States Senate. President Bush showed his support for Coverdell, and Barbara Bush campaigned for him during the senate race. He successfully won the seat in 1992 in a runoff election against Democrat Wyche Fowler. Coverdell was re-elected to his senate seat in 1998, defeating Democrat Michael Coles.

Coverdell was known by his peers in the US Senate for being a hardworking, intelligent, and devoted Senator. As a United States Senator, Coverdell supported the war against drugs and violence and worked to ensure a good education for all children. He sponsored efforts to allow parents to create special tax fee savings accounts for their children's educational future. As Chairman of the Agriculture subcommittee on Marketing, Inspection, and Product Promotion, Coverdell promoted Georgia's agriculture and worked to ensure food safety. Coverdell also served on the Small Business Committee working to create a fairer tax code. Coverdell supported volunteerism throughout his career. In June 1997 President Clinton signed into law Coverdell's Volunteer Protection Act, a law that protects volunteers, nonprofit organizations, and governmental entities from lawsuits when they are involved in charitable and non-profit activities. Coverdell also worked hard to combat problems concerning drugs in the state of Georgia and worked to impose stiffer penalties for drug smugglers and dealers. Coverdell served on the subcommittee for Foreign Relations and has worked in Georgia to initiate Operation Drug-Free Georgia.

After experiencing a cerebral hemorrhage the weekend of July15, 2000, Senator Coverdell underwent surgery at Piedmont Hospital in Atlanta on July 17th. He died on July 18th after undergoing the serious brain surgery. The death of Coverdell is a great loss for the state of Georgia and the United States Senate. Senator Coverdell was known by his peers for not letting partisan politics influence his beliefs. He is remembered for his high standard of ethics and his humble attitudes. At the time of his death, Senator Coverdell was the fourth ranking Republican in the United States Senate.

This story has been posted in the following forums: : Headlines; Peace Corps Directors - Coverdell