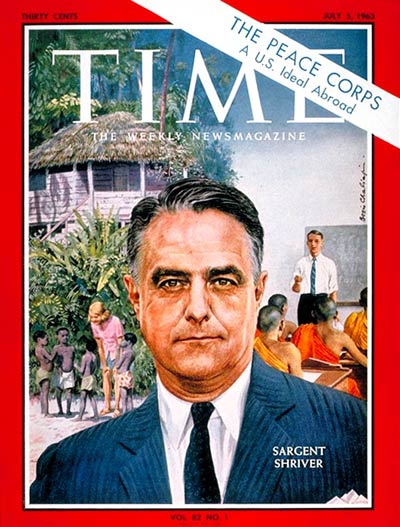 Sargent Shriver
Chairman of the Board

As an international lawyer and administrator, ambassador, and an advocate for the poor and powerless, Sargent Shriver has compiled an unparalleled record of public service at every tier, from the local level to the world community. A graduate of Yale University and Yale Law School, Shriver served in the US Navy for five years before ending his military career as lieutenant commander.Sargent Shriver

After ending his military career, Mr. Shriver worked briefly as an editorial assistant at Newsweek magazine before joining the staff of Ambassador Joseph P. Kennedy as manager of the Chicago Merchandise Mart. Later, he participated in the formation of some of the programs developed and supported by the Joseph P. Kennedy, Jr. Foundation.

During his long and prestigious career, Mr. Shriver:

1947-48 Conducted, with his wife Eunice Kennedy Shriver, the National Conference on Prevention and Control of Juvenile Delinquency in Washington

1955-60 Served as president of the Chicago Board of Education

1960 Worked as a political and organization coordinator in the Wisconsin and West Virginia primaries for Democratic presidential candidate John F. Kennedy

1961-66 Served as the organizer and first director of the Peace Corps, where he developed volunteer activities in more than 50 countries in Africa, Asia, and Latin America

1964-68 Served as the first director of the Office of Economic Opportunity under President Lyndon B. Johnson

1970 Served as chairman of Congressional Leadership for the Future, traveling to 29 states to gain support for 89 Democratic candidates for the House and Senate

1970 Named a partner, specializing in international law and foreign affairs, in the law firm of Fried, Frank, Harris, Shriver and Jacobson

1975 Nation-wide Lecture tour of the USSR at the invitation of the Government - "Co-Existence and Common Existence".

1981 Appointed to the Rockefeller University Council, an organization devoted exclusively to research and graduate education in the biomedical and related sciences

1984 Elected president of Special Olympics, Inc. by the Board of Directors; as president, he directed the operation and international development of sports programs in countries around the world

1990 Appointed Chairman of the Board of Special Olympics, Inc.

1994 Received the Presidential Medal of Freedom, the nation's highest civilian honor, from President Clinton on August 8; dedication of The Eunice Kennedy and Sargent Shriver Center at the University of Maryland Baltimore County - to engage the strengths and resources of higher education in finding creative solutions to the most troublesome social problems of our time.

This story has been posted in the following forums: : Headlines; Peace Corps Directors - Shriver; History