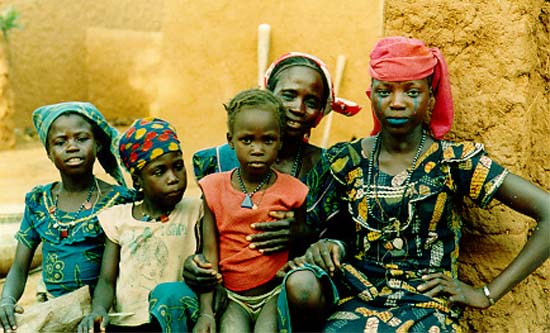 I took these photos while I was a Peace Corps Volunteer in Niger from 1990 to 1993. I worked as an agroforestry extension agent in a predominantly Hausa village called Lawai Kaoura Alassane (Birni N'Konni arrondissement). I now work as a transportation planner in Portland, Oregon. - Bill Stein

My NeighborsThe families I shared a wall with (100K)

Babbanballa and familyThe family of one of my best friends (90K)

Oumarou and HalimaThe inside of my Fulani friends' house (83K)

Millet at duskNiger's staple crop just before the harvest (50K)

Dossey from aboveThe most beautiful village in Niger (115K)

This story has been posted in the following forums: : Headlines; Special Interests - Photography; COS - Niger