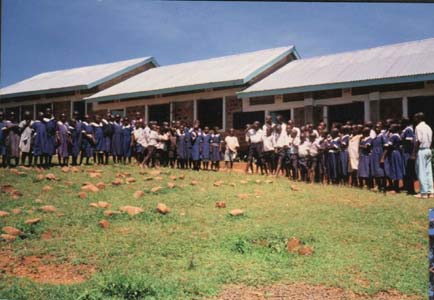 Read and comment on this story from the Allentown Morning Call about the work in Pen Argyl by Returned Volunteers to help raise funds to build 151 Peace Corps schools in 27 developing countries at:

In 1987, the Peace Corps sent a nine-person film crew from San Francisco to Pen Argyl to make part of a video that is still being shown to Peace Corp Volunteers before they return home from 64 developing countries. The film, entitled "Bringing the World Home" encourages Peace Corp Volunteers to keep on volunteering at home.

In Wind Gap they filmed Louis Felker's sixth grade studying about the cultures and problems of the newly independent countries of Africa and raising funds to help build Peace Corps schools there.

In Pen Argyl they filmed one of the many Peace Corp garage sales held to raise funds to build 151 Peace Corps schools in 27 developing countries. For this, in 1991 the National Peace Corps Association presented their annual Sargent Shriver Award to Slate Belt resident Marjorie May at the 30th Anniversary of the Peace Corps in Washington, D.C.

On Oct. 28, at a special covered dish dinner at Grace Methodist Church in Pen Argyl, Marguerite Beal, a very active volunteer and member of that church, presented a check for $500 to May for another school in Africa and Faust Cascioli presented a similar check from the Easton Suburban Kiwanis Club. This will be the 152nd Peace Corp School that Pen Argyl people and their friends have helped sponsor. Others in attendance included Dr. Becky Roberts; Kevin Dolan, president of Easton Suburban Kiwanis, Mimi Stanford, president of Eastern Pennsylvania returned Peace Corps Volunteers; Faith Casioli and Ruth Brusie.

Pen Argyl is a small town of about 3,500 people. It was settled in the mid-19th century by Cornish people who brought their religious beliefs with them. They liked the idea of "servant leadership" which today can be compared with volunteerism. Their descendants in the Slate Belt area continue the cause of reaching out and helping other people. Copies of a book entitled "A Better Future" by Marjorie May were presented to the speakers at this year's dinner. The book traces the 31 years of fund-raising for Peace Corps Schools in Africa, and student exchange programs designed to improve relations among nations.

Hi. I'd like to get info about how can I become a member of the peace corps.
I will apreciate any information you can send me
Thanks.
Al.

"By now, you probably know that you have to be at least 18 years old and a U.S. citizen. Beyond these requirements, how do you know if you're qualified to become a Peace Corps Volunteer? Use our quick calculator to find out."