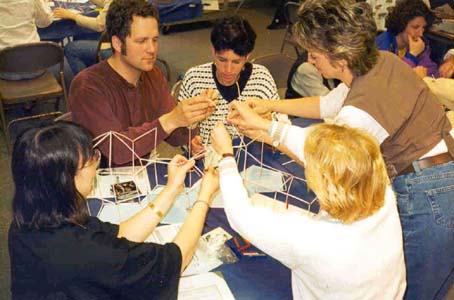 Read and comment on this excerpt from an article from the Springfield State Journal Register on RPCV Trevor Cottle and his involvement with primary school bilingual education in Beardstown, IL at:

BEARDSTOWN - Trevor Cottle still remembers how helpless he felt back in 1992, when he was a newly arrived Peace Corps volunteer in Ecuador who spoke little Spanish. So when he speaks English to the Mexican first-grade children he now teaches, he dons a big straw hat.

One school day just before Christmas, he wore the wide-brimmed hat while reading an English story aloud to his class at Gard Elementary School. He removed the hat later, when the pupils read a book aloud together in Spanish.

The hat is one way that Cottle tries to ease the children from Spanish into English and to soften their culture shock.

"I consider this kind of like a safe haven," he said of his classroom.

"They can interact with their peers. They can verbalize what they're feeling if they need to."

Cottle is one of a dozen teachers hired for a bilingual program that suddenly became necessary in Beardstown in the mid-1990s. During the 1990s, large numbers of Mexican immigrants began moving to this Illinois River town to work in the Excel Corp. meatpacking plant.

The "transition" philosophy is evident throughout Trevor Cottle's first-grade classroom, where most of the children have dark brown hair, light brown skin and Spanish names such as Reynaldo, Marisol and Carmen.

Cottle speaks Spanish while teaching his all-Hispanic class, then puts on his hat and switches to English to teach certain subjects, including reading. Working alongside him is aide Dolores Raya, who was a schoolteacher in Mexico. She helps Cottle with his newsletter, corrects his Spanish grammar and is a "very important link" to parents, Cottle said.

Just as the school day is divided into English and Spanish segments, letters of the alphabet are posted on the walls in both Spanish and English. The Spanish alphabet has a drawing of a shoe, or "zapato," next to the letter "z," while the English version has English hints. Elsewhere in the room, signs read, "calendar = el calendario," and "clock = el reloj."

On a table are stacked Spanish-language versions of "Hansel and Gretel," Dr. Seuss' "Green Eggs and Ham" and other children's favorites.

"A lot of the children that I get, the younger children, they come directly from a Spanish-speaking country. They're experiencing culture shock, a different language, different surroundings," Cottle said. "They need a place where they can feel comfortable."

Though the goal is to move students into English-speaking classrooms after three years, a child can take five to 10 years to really become fluent in English, Cottle said.

"It's a process of acquiring a language," and it's not quick, he said.

Cottle spoke from experience. The 34-year-old teacher grew up in central and southern Illinois and studied very little Spanish before he lived in Ecuador - he'd taken high school Spanish for half a quarter but dropped it because he hated it. In Ecuador, he started dreaming in Spanish after about five months. When he left the country in 1994, two years after his arrival, he had grown into a strong speaker of Spanish, but still felt he had much to learn.

The launch of Beardstown's "transitional bilingual" program has been criticized by some faculty members and others who believe that Mexican children should be immersed in English classrooms. California residents' 1998 vote to ban bilingual education in that state did not help the cause for a transitional bilingual system in Beardstown, Cottle said.

"They have to have that base, especially if there's a Spanish- speaking home."

Most of the bilingual teachers in Beardstown are, like the sandy- haired Cottle, of European descent, and they have widely varying Spanish skills. Many rely on native Spanish speakers for teachers' aides, who work alongside them in their classrooms.

The aides, many of them immigrants themselves, are important not just to translate but to help bridge cultural differences with parents or talk empathetically with children struggling to adjust to a foreign culture, the teachers say.

"One of the most important things to remember is to put ourselves in their place," said sixth-grade teacher Susan DeWitt, who spoke little Spanish when she was recruited from within the district to teach bilingual children. "Speaking English is different than reading about the Romans and Greeks in English."

Haut, the program coordinator, added: "Would you like to learn Mexican history in Spanish?"

In Cottle's first-grade class, about half his pupils' families have moved to Beardstown directly from Mexico, while the rest lived in other states before settling in Beardstown.

Cottle works hard at making the study of English a comfortable experience. His young pupils are so used to seeing Cottle put on his big hat before he switches from Spanish to English that one girl raised her hand when he paused to translate an English word into Spanish in the story he was reading.

"You're talking with the hat in Spanish," she said, in English.

"Yes, I know," he replied, also in English, "but sometimes I have to."

Hello Trevor, I enjoyed the article about your classroom. It reminded my of the day I came in from recess when I was in kindergarden at Madison Elementary in Adrian, Michigan. The teachers were all crying. It was a cultural schock for me. I got the idea that white people like to cry. Then I remember Mrs. Rambo telling us that our President Kennedy had been assasinated. I hardly knew what a president was. I'm 47, and both my wife,Sue are teachers for Detroit Public Schools. The violence people hear about is true, unfortunately. The intrinsic rewards from teaching the downtrodden children are priceless. I posted a message for Sue and staff. I hope it gets approved. I believe you and your staff will create many Hectors in the future. I have my masters from Wayne State University, and several people have documented my art classroom based on the incredible success that my students are having. Just think, my cousin who mother is white, used to tell me when I was five, " Hector your saying choose instead of shoes; Say it like this, I'm putting on my shoes." I've put on many different pairs on over the years, through teachers' guidance like your staff, I now wear teachers shoes. Keep up the great work, my brother! Now you have a homeboy in Detroit that your welcome to use as a resource. My story is on the web, just type in Hector Tapia Perez or free rare foundation video. You should be able to order it online. Keep in touch. Peace and Love,
Hector Tapia Perez

Hi Susan and middle school staff. I stumbled across your site when I was doing a search for my lost cousins in Monterrey, Mexico. I saw a reference to Martinez. I read that he had killed someone. My mother is a maternal grandfather is a Martinez from there. She died in 79 so I never got to meet that side of my family.
I teach in probably the roughest cities in the world,Detroit,Michigan, specifically southwest Detroit. I serve as a mentor for the kids in the 'hood. Detroit is about 80 African American. Hispanics are coming from all parts of Mexico and they are the masons and cement workers. Southwest Detroit used to be torn up, now it's getting a fine face lift.
I was born and raised in Adrian, Michigan. Sunnyside is the neighborhood where the original farm workers settled. Check it out on the web, Michign State University had done research there. My story is on the web. Type in free rare foundation video. Teachers in Michigan can order the DVD online. Let me know if you can't get the video; you should be able to get it. It was produced with a grant from the U.S. Dept. of Ed. It was produced to encourage mentoring and peace. The video compresses my story much better that I can communicate in an e-mail. Your town is going through the similar chain of events that occurred in Adrian.
I chose to write you because I'm a middle school teacher too. Just think of the power you have simply from the sound waves coming from your mouth as you speak to your class. I think it must be the "dark matter" that scientists talk about. It was a girl named Sue that woke up my spirit. I used to mess with heroin when I was 16. I eventually married her. She is a teacher at Detroit Southwestern. If you know of any sports buffs, it is where my wife taught Jalen Rose, Howard Eisley, and Voshon Leonard. They are all professional basketball players. It is also the school in the ghetto that produced Dr. Ben Carson, a young black child who lashed out at some racist children and attemtpted to stab the mean boy. He still uses a knife, maybe its a laser. He became the nation's youngest chief of neurosurgery for children at the nation's top rated hospital, John Hopkins Medical Center in Baltimore, Md. Check out his web site.
We see close to a murder a day in Detroit on the news. It's not a pretty site. Gangs are the new urban terrorists that no one seems to address. I do in my classroom. We try to create new visions in our art classroom. Gangs arise when children have no sense of belonging. That's where we teachers come in. Some of my best talent comes from the fatherless children, all financially poor, but spiritually rich. I started getting attention because my students ecxell in art and because I mentor them. My first mentee, Isaac Moreno, from Monterrey, Mexico, is now an aritst in residence in Harlem, NYC. I don't know how long you've been teaching, but any thing I can do to help any budding artists or knucklehead who plans to be the next Al Capone. I'm in my twentieth year. It's Sunday morning, I thank God that I can be of service to your community. Remember the power of your voice.
We've had tons of professional development workshops in Detroit Public Schools, but they never seem to hit the nail on the head. I plan on looking into the speaking circuit. Many of the speakers have grandiose ideas, but were ineffective in the real classroom. My students are African American, Hispanic (from all points of Latin America), and White. You'll see how we get along in the video. Oh, do you have any chilren from Michoacan, Guanajuato, San Luis Potosi, or Nuevo Leon? My grandparents were from those states.
Peace and Love, Hector Tapia Perez

I just stumbled onto to this site. this belongs to my little brother, Hector. We did not live our child hood together as I was sent to the convent at the age of 13. I now live in Detroit and my brother has moved on to Hawaii due to his health. The view years I have made contact with my brother has left me with a great impression that I cry bacause I am so proud of what he has accomplished after a rough teen life. Because of this he has been able to help many students succeed and prosper. Hector does motivational speaking for the teachers to teach them not to have such a high rate of drop outs. Standing ovations for his speaches that again make me very proud of my brother as a teacher of Art, a gift that has been passed on to students from Detroit that have such a talent they didn't know they had!