What is the status of the Gaddi Vasquez nomination?

We have been asked to put together a short note on the history and status of the Gaddi Vasquez nomination for Peace Corps Director and some recommendations on what you can do if you oppose the nomination. So here is where we stand:


The History of the Nomination

On November 14, we attended confirmation hearings for Mr. Vasquez and filed our exclusive report on it along with our assessment of how the hearings went for Mr. Vasquez. On December 14, the full membership of the Senate Foreign Relations Committee met to discuss his nomination and for the first time in Peace Corps history, votes were cast against a nominee for Peace Corps Director. Peace Corps Online provided exclusive coverage of these hearings. On December 20, Senate Minority Whip Don Nickles asked the Senate for unanimous consent to get a confirmation vote for Bush Nominees including Gaddi Vasquez for Peace Corps Director but the Senate adjourned without taking action.

On January 15, we were able to obtain a copy of the letter written by Founding Director Sargent Shriver to Senator Chris Dodd, which Senator Dodd read into the Senate Record. The letter explains Director Shriver's vision for the future of the Peace Corps and the reasons for his opposition to the nomination of Gaddi Vasquez in more detail. 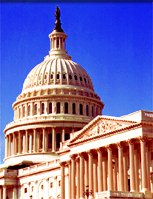 Where the Nomination stands in the Senate

At this point, it is unclear what will happen with Mr. Vasquez's nomination. The Senate will reconvene on January 23 and could vote at any time. However, it is possible that a vote will not take place at all. Under the rules of the Senate, if a Senator or group of Senators feels strongly enough about a specific nomination, they may meet with the Senate Leader, in this case, Senator Tom Daschle, and ask that the nomination be held back and not voted upon.

It is possible that one or more of the Senators who voted against Mr. Vasquez in committee: Senator Sarbanes of Maryland, Senator Rockefeller of West Virginia, Senator Feingold of Wisconsin, or Senator Wellstone of Minnesota may ask that the nomination be held. It is also possible that Senator Dodd of Connecticut, the only RPCV in the Senate, who stated in Committee that he found the nomination "troubling" and that he thought Mr Vasquez lacked qualifications for the position may modify his position and actively oppose Mr. Vasquez's nomination.

What have RPCVs already done?

Hundreds of RPCVs have signed the petition against Mr. Vasquez which was presented to the Senate.

Thousands of RPCVs have made phone calls and sent emails to their Senators. Senator Dodd threw down a stack of emails in the meeting of the Foreign Relations Committee and said that "this is just a small number of the emails I have received from former Peace Corps volunters across the country and others who care about the institution in strong oppositon to this nominee."

The committee for the Future of the Peace Corps has taken the lead by placing an ad in "Roll Call" the newspaper for Congress, coordinated witnesses like Director Jack Vaughn to speak against Mr. Vasquez, and met with Senators and their staffers to lobby against the nomination.

What RPCVs can do now?

Here are three things RPCVs can do right now:

1. You can call or email the offices of the four Senators who opposed Mr. Vasquez in committee and thank them for their stand:

2. You can call Senator Dodd of Connecticut at (202) 224-2823 or email him here and ask him if he would reconsider actively opposing the nomination.

3. Please check back on this web site before the Senate reconvenes on Tuesday, January 22 to find out the latest status of the nomination, where other Senators stand on the nomination, and who we need to contact to be most effective.

We'll see you then.