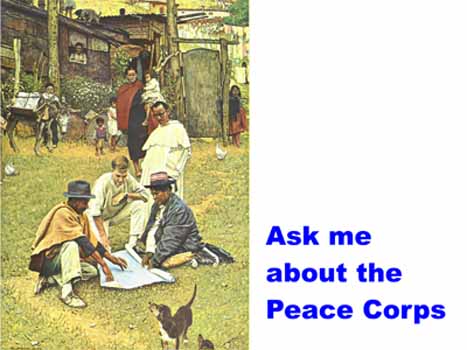 You all make us proud.

Okay, so we lost the battle. Gaddi Vasquez was confirmed, and I agree that we owe it to the Peace Corps to be supportive of his efforts. But I don't intend to let President Bush forget that he used this agency for a political payback, and I don't intend to let those senators who mindlessly approved this nomination forget either.
Business as usual is not good enough!

The editorial is well spoken and on target. The battle is ended but RPCV's are far more aware and engaged and will pay close attention to Gaddi Vasquez's performance. Fortunately he will have excellent help with Jodi Olsen as Deputy. We should pay close attention to the policy and personnel decisions which will shape Gaddi's impact on Peace Corps. Most major appointments have yet to be made and they will speak volumes about the nature and quality of Gaddi's decision-making. We should wish Gaddi well and lend our support and help. Ken Hill

We ?
I supported the nomination of Vasquez. As it disagreed with local editorial policy, it was not shouted from the housetops.
But.......I agree with the editorial. It is time for all us RPCV's to get with it and support the agency.
Perhaps with Vasquez in the saddle, PC can return to its original meaning rather than its leaning, in the last twenty years, toward Polically Correctness.

(I don't know if the reply I sent was received, so if I am redunant, I'm sorry)
I have no idea what Oz is talking about....twenty years of "political correctness" with Reagan/Bush/Clinton...and the first RPCV to be Director? and what is the "original meaning"of the Peace Corps that half of us missed?????
"Real" Peace Corps Volunteers don't use jargon or speak in cliches...."Real" Peace Corps Volunteers don't disparage the work of other Volunteers. So, please, honor us with specifics, Mr. Osborn, Sir.

It is the usage of the initials "PC". They were always used to mean Peace Corps. But, in recent times, the initials have been increasingly meant Politically Correct.
It does not reflect any specific administration, but, rather, the increasing tendency for the country directors to require PCV subjugation under the guise of cultural sensitivity.
As to jargon, cliches, or disparagement of other volunteers' work, I don't know what you are referring to.