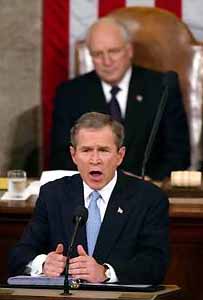 Read and comment on this excerpt from the NY Times on Harris Wofford's comments on President Bush's proposal to double the number of Peace Corps volunteers at:

The president proposed doubling the number of Peace Corps volunteers. A total of 7,000 are serving two-year tours in 70 countries, and doubling it would bring program levels to the highest since the mid-1960s, when they reached a peak of 16,000.

``We will renew the promise of the Peace Corps, double its volunteers over the next five years and ask it to join a new effort to encourage development, and education and opportunity in the Islamic world,'' Bush said.

``We have no intention of imposing our culture, but Americans will always stand firm for the nonnegotiable demands of human dignity: the rule of law, limits on the power of the state, respect for women, private property, free speech, equal justice and religious tolerance,'' he said.

A senior administration official said Bush hoped to send Peace Corps volunteers to Afghanistan, which has been the first front in the U.S. led war against global terrorism.

``People of all ages have been waiting to be summoned,'' Wofford told Reuters. ``I think he'll get a very good response.''

He cited consistent poll results showing a high proportion of the population favors mandatory national service. Any call to action must be backed up by realistic avenues for service, Wofford added, and he said Bush's proposals appeared to provide them.

Bush was to discuss the plan in further detail during a trip to North Carolina and Florida Wednesday, administration officials said.

Yes, it is high time the Republicans supprot the Peace Corps since many of their colleauges did theri best to destroy the organization during the ninties.
Richard H. Roth
Returned Peace Corps Volunteer, Sierra Leone 91-92,
Mozambique 98-2001

I worked at PC/Washington in 1985 during the Caribbean Basin Initiative push to raise the number of PCVs in the Caribbean to 10,000. It was a disaster--we were taking anything that would walk (barely) and disregarding host country desires for type, or quantity of volunteers. Later, serving as an APCD in Costa Rica, I actually had a woman in her 70s who was so feeble that the community asked me to please take her away; they were having to take care of her, instead of the other way around! I was very ashamed that I couldn't do anything; washington said she was fit to serve and had sent her knowing her physical condition.

I submitted this post in response to Dr. Sargent Shriver's call to enlarge the Peace Corps Program. After President Bush's call to service, it is even more important to look at quality of service versus quantity of volunteers.

I commend your efforts in spreading the message of peace and
understanding in this time of global need. Imagine a world where each
person reaches out to their neighbor, individual beliefs are valued,
unique cultures are respected, we seek rather than hide from diversity
of mind and body, and humanitarian efforts become more important than
economic prosperity.

The Peace Corps is a proven change agent, bringing about greater
understanding between cultures while nurturing the personal growth of
participants. Research (Cross 1998, Starr 1994) has proven the Peace
Corps experience can bring about greater self-efficacy, independence,
and self-confidence, as well as, increased cultural awareness of host
country, and greater appreciation for home country in volunteers.

Yes, Peace Corps, is a successful program in promoting cultural understanding,
but I question whether a larger program will actually enhance or
diminish the promotion of 'global peace.' Wouldn't it be more prudent to
concentrate on quality rather than quantity? As a volunteer in a West
African country with 120 volunteers in country, I saw the detrimental
qualities of a 'large' Peace Corps effort. I witnessed numerous cases of
ineffective and offensive volunteer actions; volunteers who flaunted
American wealth in the face of destitute host country nationals,
volunteers who spent more time drinking in the capital city than working
in their assigned posts, volunteers who refused to learn any local
languages, American women unwilling to abide by Muslim dress codes,
and a volunteer who suffered through an extreme case of culture shock
that ended in his inability to leave his hut, excessive drinking and drugs,
hatred of the host country, and eventual Psychological Evacuation.
Worst of all I witnessed reverse culture shock experienced by host
country nationals. I saw people offended by American actions and/or
inactions, villages disappointed by a volunteers early termination of
service, village elders dismissed by Peace Corps officials, meals turned
down by visiting PC administrators (a cultural insult) and people
embittered by American displays of wealth and superiority.

These are incidents I witnessed in my two years of service and I have
talked with other volunteers from other countries and our stories are
very similar. These 'symptoms' are a part of the larger problem of Peace
Corps early termination rates said to hover around 20% (Storti, 1990).
The ET rate in my training group reached 60% before we ended our two
years of service. Large Peace Corps communities lack the quality
needed to bring about true cultural understanding. In these areas of
volunteer saturation, productive job assignments are not provided
equally, evaluation and support of volunteers is inadequate due to
limited administrative resources, and a sense of community is lost when
a volunteer becomes a number rather than a member of a close-knit
group.

Now please do not mistake my statements for a general statement for
all PC volunteers or programs. For every negative story, I have three
positive stories of participants making a difference on a personal and
national scale. The work of dedicated, culturally sensitive, and
open-minded volunteers is tremendous and makes a true impact on
their own and others' cultural understanding. Wouldn't it be wiser to invest government
resources in making the Peace Corps better and not just bigger.
Resources are needed in the application process to ensure quality
entrants in the service. The greatest investment must be made to the
training of new volunteers. Volunteers need a training that is not only
content based but also community based. Participants need to be
engaged in community building. People will only commit to an
organization or vision where they feel supported and accepted.
Participants also need to learn how to self-reflect on the intense
cultural encounters they will experience. By investing in the program
and ensuring villages and communities they are hosting dedicated,
caring, and skilled volunteers, the Peace Corps will be an effective
promoter of Peace. If the organization decides to mass-produce
volunteer diplomats the effect could be devastating to global
understanding and the Peace Corps mission.

I could continue for pages on this issue. I am very passionate about the
need for Peace Corps to concentrate on the quality of their
programming because the cost is too high not to. I urge you to
reconsider your quest to enlarge the volunteer base. The organization
you created needs re-evaluation and quality control measures before
we franchise its effort.

Is it true that Rolling Stone journalist, Hunter S. Thompson served in Sierra Leone with Harris Wofford? I have read excerpts of Thompson's books where he comments about his service in the Peace Corps, but can't seem to find any verification of it.