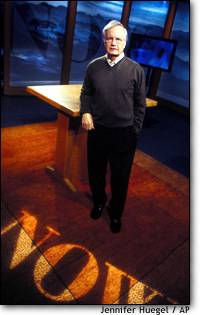 Read and comment on the statements of former Peace Corps Staffer Bill Moyers when he was interviewed by Tim Russert on CNBC and asked to talk about the Peace Corps at:

I was born again.

By the way, I thought his speech was well delivered and well crafted and thought it was was a good speech as State of the Unions go.

But this really hooked me. Forty years ago I helped organize the Peace Corps for John Kennedy. I became the first Deputy Director and I remember that period of optimism and idealism when it was ok to be an idealist and a lot - because of Vietnam and Watergate and the conflicts in American society - has been lost.

I thought that Bush did a good thing last night. Sounding that trumpet again. Americans do like to do things. They do want to do things.

Now it's going to be difficult to get Peace Corps volunteers into these Moslem societies - it's dangerous in some of these places like Egypt. You're not going to get them into Saudi Arabia and Iraq and Iran. That's not going to happen there.

But the idea that we can infect others with our hope and with our idealism and then we can bring back from that experience, insights and experiences that we would not have had that can make us better citizens.

The great advantage of the Peace Corps over the past 40 years is that it has created some 150,000 American citizens living and working in this country now who understand the world better and have different sensibilities than they would have if they had never gone and I think that George W. Bush did a good thing this week when he rekindled the possibility of idealism also being a servant of the cause.

Tim Russert: Do Peace Corps Volunteers change the thinking of people in the country they visit, their attitudes towards people in America?

They change -I do believe there is evidence that they change the attitudes of the people with whom they come in contact.

But you have to remember that they live to isolated isolated circumstances - their influence is radiated to just the immediate individual or individuals or community and over the years there have been built up wonderful relationships between teachers in Ghana and the Peace Corps Volunteers who have come back here or farm workers in the Philippines and places like that.

Have they changed the political climate? - No. Have they changed the structure of the country? -No. But who knows, where over time, these influences that have been planted in these personal relationships may come out and have a moment of triumph not expected until that moment.

I admired since I was a child the sacrifices of Peace Corp volunteers who are willing to be away from their families to help other countries' peoples. When I was 5 years old, 2 US peace corps Jane Barlou and James Beemer stayed in our house at Pilar, Abra, Philippines. Although I'm not sure if their names are correctly spelled, they vividly remain in my memory up to now that I'm already 47 years old. Do you know them? Please extend my regards to them. Thanks and God bless.