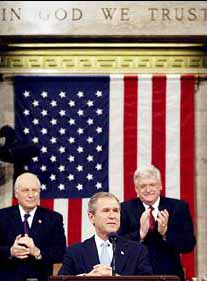 Read and comment on this story from the Albany Times-Union that says that realizing President Bush's dream of national service will require a difficult change in behavior, say experts on community and volunteerism at:

Americans have made an attitudinal shift from "me" toward "we" since Sept. 11, surveys show. But realizing President Bush's dream of national service will require a far more difficult change in behavior, say experts on community and volunteerism.

In his State of the Union address, Bush challenged every American to give two years or 4,000 hours of volunteer work during the rest of their lifetimes to "overcome evil with greater good."

It was a rallying cry with echoes of John Kennedy's 1961 call to "ask not what your country can do for you -- ask what you can do for your country." But now comes the hard work of turning rhetoric into action.

"The challenge is to harness this increased desire to serve," said Sandy Scott, a spokesman for AmeriCorps, one of the government public service programs Bush wants to boost. "We have to make it real. We have to connect people with volunteer opportunities. We have to encourage them.

"The bully pulpit of the White House is a great place to start. In Kennedy's day that might have been enough."

Today, Scott said, it will take a massive national effort -- by nonprofits, corporations and individuals, all encouraged by government.

Specifics of Bush's plans include:

Forming a new "Citizen Corps" coordinated by the Federal Emergency Management Agency. Among other things, it would encourage citizens to spot threatening activities in their communities and to do volunteer administrative duties for police departments.

Boosting international aid through the Peace Corps, by restoring the number of volunteers to 15,000, matching the program's all-time high in 1966.

With some exceptions, volunteer organizations are applauding the proposals.

"People are hungrier to serve now," said Kathy Kessnich, a spokesperson for Rotary International, a 97-year-old service organization based in Evanston, Ill. "They're actually looking for volunteer opportunities, particularly young people. It's a response to Sept. 11."

Before the terrorist attacks, many had lamented the lack of community-mindedness.

The proportion of Americans responding in nationwide surveys that they "trust the government in Washington" only some of the time or never rose from 30 percent in 1996 to 75 percent in 1992. Service organizations such as the Lions, Elks and Shriners had experienced double-digit drops in the number of volunteers. And while more Americans were bowling than ever before, bowling in organized leagues had plummeted.

Putnam wrote that only a "national crisis" could change this bleak outlook. Then came Sept. 11.

Now, in the Feb. 11 edition of The American Prospect, Putnam writes of a new window of opportunity for societal change.

"Will behavior follow attitudes?" Putnam asks in the article. "It's an important question. And if the answer is no, then the blossom of civic-mindedness after Sept. 11 may be short-lived."

Edith Cobb, 78, watched the State of the Union speech in her Philadelphia apartment. She liked what she heard, in part because she's a longtime volunteer herself.

For at least three hours a week, Cobb spends time with Racquel Hughes, 10, who has a severe developmental disorder that prevents her from speaking.

"Volunteerism is a good thing," Cobb said. "There are lots of people who are sitting around not doing anything. You're not helping yourself when you do that.

"Well, maybe you could help somebody else. That's when you get your blessing."

Cobb and Racquel were linked by Family Friends, a program that matches volunteers 55 or older with the parents of children with special needs. The group received funding from Faith in Action, a program funded by the Robert Wood Johnson Foundation.

Bush has established a volunteer umbrella agency, Freedom Corps, to make the connections at a federal level. On Wednesday, in Winston- Salem, N.C., the president promoted volunteerism with the enthusiasm of a cheerleader.

"It sounds like I'm making a pitch, and I am," Bush said after reading out the initiative's Internet address, usafreedomcorps.gov. "This is the right thing to do for America. 1-877-USA-CORPS. If somebody out there is interested in figuring out how to serve, it's 1- 877-USA-CORPS."

Not everyone, however, is receptive. Gabrielle Kurlander, president of The All Stars Project, a nonprofit serving poor children in New York City, resents it.

"Frankly, I find it quite strange to call for greater government control of volunteerism," said Kurlander, whose volunteer organization has been honored as one of the national "Points of Light," an effort begun when Bush's father was president. "I'm not sure that's the way to do it. Look at history. Programs run by government have not been the most effective."

But count Bradley Googins, director of Boston College's Center for Corporate Citizenship, among the hopeful. To him, Bush is using the momentum of the anti-terrorism campaign and his own popularity with the American public to institutionalize the ideal of public service.

"The proof will be in the pudding, for sure," Googins said. "Will we retreat to the narrow self-interest we sometimes see in politics and the worst of corporations, or will we really see a different world emerge?

"I will say that there seems to be something in the air right now, a spirit that has the potential of carrying over into the future."

If you want us to love this racist country that we are forced to live and die in give us our freedom right here in america. Slavery hasnt ended it's only changed. As of april 14, 2003 my children and i are american slaves and we are being persecuted. Who is trying to help us?, nooone that's who because noone cares about the lives of the decendants of american slaves.And yet you can ask our people to go out and fight for a country that has always enslaved us and our people.Compensate my people before this gets any worse for us and we are be forced to avenge our ancestors and our generation of 30 - 40 year olds that were lost in this hateful american tradition of oppression ,rape and murder.

ok well your completely dumb because if you honestly belive that your still enslaved your obviously one of the most ignorent people i've ever heard. your right racism is still going on in the status quo and that its going on in a different matter and thats affirmative action which americans are doing to try and make up for the years americans enslaved their fellow americans. Affirmative action is reverse racism and is almost as bad if not worse then the racism that you endure on an everyday basis. if the worst thing you have to complain about is the fact that someone held the door for you and you believe that is racism. your completely upsurd and people like you are the reason that americans enslaved fellow americans