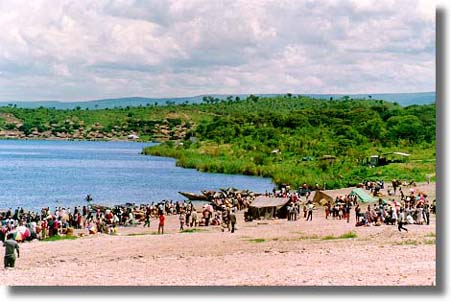 Read and comment on the Press Release from the US Peace Corps on the death of PCV Elizabeth Bowers in Zambia at:

WASHINGTON, D.C., March 11, 2002—Director Gaddi Vasquez announced the death of Peace Corps Volunteer Elizabeth (Beth) Bowers, 22, of Salem, Oregon on Wednesday, March 6 as a result of severe injuries sustained from a fall from a bicycle. Ms. Bowers was serving as a Peace Corps Volunteer in Zambia at the time of her death.

In keeping with the family’s wishes, Ms. Bowers’ organs were donated, making a lasting difference in the lives of 22 people.

“This tragic accident is a terrible loss for the Peace Corps,” Director Gaddi Vasquez said. “I understand that even in the short time she had been in Zambia, she had won over people in her village with her kindness and friendly, fun-loving nature.”

As a Peace Corps Volunteer, Ms. Bowers worked on a fisheries assignment in the Northwestern Province in Zambia. She worked with 15 households in the area to teach them fish farming techniques, as well as animal husbandry, agro-forestry, and sustainable agriculture techniques. She was promoting a more integrated farming system where all these activities are linked.

“What especially impressed me about Beth was her eagerness and enthusiasm for the new culture that she was just beginning to be exposed to,” said Zambia Country Director Brian Cavanaugh. “Though she had barely been at her site for three months, I know that she was off to a solid start and was very happy with her life and work. People had come to appreciate her.”

Ms. Bowers graduated from Earlham College in Indiana and is survived by her parents Gerard and Linda Bowers and her sister, Jennifer.

Deputy Director Jody Olsen will represent the Peace Corps at a memorial service to be held in Oregon. Volunteers in Zambia will hold a service in honor of Ms. Bowers on March 19.

This story has been posted in the following forums: : Headlines; US Peace Corps - PCVs; COS Zambia

My condolences to the family. I would want them to know that if their daughter truly aspired toward making a difference, then she did, and her experience would have been rewarding for her. That seems to me to be worth knowing. I would also suggest that if anything about the circumstances of their daughter's death strikes them as strange--how does one die from a fall off a bicycle, though I suppose it happens--then they should pursue an inquiry. Peace Corps is political, regardless of what they might think.

I have talked to Mrs. Bowers on numerous occasions and am amazed how positively the family is taking Beth's death. In one conversation, Mrs. Bowers said that "a singer wants to die on stage hitting a high C...and that is exactly what Beth did...she was doing something that made a difference..."

Unfortunately, Beth was not wearing a helmet at the time of her accident. Eyewitnesses saw her descending a hill, swerve and fall. A crowd gathered while one woman tried to stop the bleeding. Fortunately, a priest was driving by and some people flagged him down and he took Beth to a local clinic. Within 12 hours of the accident, Beth was in a Pretoria hospital, but the injury was just too severe.

I hope this helps to answer Joe Americans question.

I am saddened by the news and offer my condolences to her surviving loved ones.

On a more clinical note, when I was in the PC in 1975 in then Upper Volta, credible evidence that a vol was riding his/her motorbike without a helmet was grounds for immediate expulsion. Are there, or does the PC need, a similar rule for bicycles?

Actually, it is a rule that Peace Corps Volunteers wear approved bicycle helmets while operating or riding a bicycle. Enforcement is the real problem, especially at remote sites.