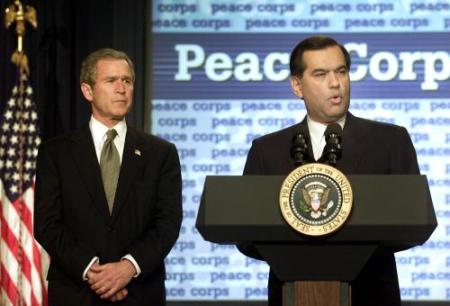 The previous Press Release was dated March 3, it was posted March 5, taken off the web site on March 6 and reposted today. We have been told that the original Press Release had minor errors and that was why it was removed. The only difference we see between the two Press Releases is the addition of one sentence at the end of the first paragraph. For the record, the Press Release can be found at:

WASHINGTON, March 3, 2002--Peace Corps Director Gaddi Vasquez left on his first trip representing the agency today to meet with government officials in Pakistan, Afghanistan, China and Peru. In Afghanistan, Vasquez is meeting with Peace Corps officials who are conducting programming and security assessments to determine if conditions in the countries will support sending in the agency’s Crisis Corps volunteers. In Pakistan, Vasquez will also meet with government representatives and will discuss the possible re-opening of Peace Corps programs there.

Peace Corps’ assessment is underway following an announcement made during President Bush’s State of the Union Address that Peace Corps will seek to reopen the program in Afghanistan, where volunteers were active from 1962 to 1976, and Pakistan, where there was an active program from 1961-1967 and 1988-1991. The President also announced his desire to double the number of Peace Corps volunteers over the next five years with a request to increase participation in Muslim countries.

In China, meetings with officials there will follow the President’s recent trip and are intended to determine the probability of expanding Peace Corps’ program. Approximately 80 volunteers have been in China since 1993.

Vasquez is expected to join Peru’s President Alejandro Toledo and President Bush in Peru for the March 23 signing of a bilateral agreement between the two countries, which will allow Peace Corps volunteers to return to Peru for the first time in more than 25 years. It is anticipated that 150 volunteers could be sent in the first 12-15 months.

This story has been posted in the following forums: : Headlines

DAUGHTER LOOKS FOR FORMER PEACE CORPS DAD
ADDIS ABABA - Azeb Tim Williams was fathered by an American Peace Corps volunteered who had lived in Ethiopia between 1968 and 1972. Tim Williams was in Ethiopia in 1999, according to the source, trying to trace the woman with whom he had a baby and his daughter Azeb Tim Williams. Hoping the public would help her find her dad, Azeb has issued the following LETTER OF APPEAL:
My name is Miss. Azeb Tim Williams. I am an Ethiopian woman seeking USA citizenship on the ground that my father Mr Tim Williams who was a Peace Corps Volunteer in Ethiopia (1968-1972) is an American through and through. Mr Guangul Teshager, a full time Ethiopian government company lawyer, became very sympathetic with my situation and volunteered to help me absolutely for free during his spare time. I did appear with Mr Guangul Teshager before the US Consular Officer in Ethiopia claiming US citizenship. The US Consular Office in Ethiopia has required Mr Tim William's written acknowledgement. I submitted his letter of acknowledgment which he signed 36 years ago. They again wanted Tim Williams to confirm that the signature on that document is his signature. Mr Tim Williams was a Peace Corps Volunteer in Ethiopia from 1968-1972. Mr Tim Williams was loyal to the mission and objectives of the Peace Corps as an institution. He sacrificed the comforts of America and volunteered to help Ethiopians in an unfamiliar and stressful situation. I am confident he won't do anything that dusts the long standing excellent name and high moral standards of the Peace Corps. He did many wonderful jobs during his stay as a Peace Corps from 1968-72 and that was the time he met my mother and I was born from that relationship. I am now looking for him. My lawyer, Mr Guangul Teshager, has filed a petition on my behalf to the USA Embassy in Ethiopia. The USA Embassy officials in Ethiopia are trying to reach him. Tim's email address (twwillia@clark.net) which I found in the internet bounced back. I am told by my mother that he was kind and considerate. He could be as well toiling trying to trace me. I heard he was in Ethiopia in 1999 but I presume he might have been disappointed after a long tedious search to meet his first daughter. I beg you to assist my father in his search to find his daughter. I can be reached through my lawyer, Mr. Guangul Teshager. My lawyer's email address is: guangulteshager@yahoo.com His cell phone is: +251911256492
I highly value and appreciate your kind cooperation
Yours respectfully,
Azeb Tim Williams

Dear All,
Azeb Tim Williams got a US citizenship and she is now in the USA.