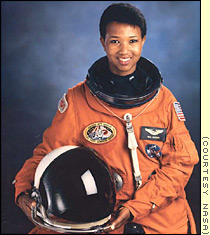 Read this story about Dr. Mae Jemison: Astronaut at:

A medical doctor, astronaut, philanthropist, activist and businesswoman, Dr. Mae Jemison is a 21st-century Renaissance woman. She is best known as the first black woman to go into space, doing so on the space shuttle Endeavour in September 12, 1992. Jemison is also a social scientist and an advocate for public education and the developing world. After practicing medicine for nearly three years in west Africa, she founded The Jemison Group to research, develop and implement advanced technologies and the Jemison Institute for Advanced Technology in Developing Countries at Dartmouth College.

CAREER After completing her medical residency and spending two and a half years with the Peace Corps in Sierra Leone and Liberia, Jemison began practicing medicine with CIGNA Health Plans of California in 1985. She joined NASA in 1987, conducting biological and material science experiments on a fall 1992 mission. After leaving NASA in 1993, Jemison joined Dartmouth College's faculty, teaching courses on space age technology and developing countries. She later founded The Jemison Group, served as a consultant to the Discovery Channel's "World of Wonders" program and appeared in an episode of "Star Trek: The Next Generation." A popular speaker at civic, education and business forums, Jemison published her autobiography, "Find Where the Wind Goes," in 2001.

PERSONAL The youngest of three children, Jemison was born in Alabama and raised in Chicago, Illinois. She lives in Houston, Texas, with her three cats.

This story has been posted in the following forums: : RPCV News

Regarding the article about Dr. Mae Jemison I would like to point out that Dr. Jemison is not an RPCV. She served in Freetown as the PCMO and had a considerably different lifestyle than PCVs. If my memory serves me properly she did have a personal relationship with a PCV stationed in Freetown. My personal experience with her was not positive--she was averse to traveling outside of the capital city, her recommendations were "off-the-wall" and impractical and her "bedside" manner was that of the beginning doctor that she was. She was not comfortable physically touching patients, was (anecdotally) said to have mishandled some patients. One of her recommendations was to boil(!) shower water. We tried to explain to Dr. Jemison that putting screens up on our windows was not practical because there was no screen material available and she got quite mad at the PCVs for such a suggestion. She also tried her best to restrict PCVs from coming to Freetown for medical attention by instituting per-diem rates/rules that were unrealistically strict and impossible to comply with.

My own experience with other PCMOs has been generally positive having been PC connected in Sierra Leone, Micronesia and Kazakhstan.

Pleae inform the public if there is any proof to this story posted by Jim Hitter on Tuesday, January 7, 2003-5:32 p.m., since every story is suppose to be based on facts. This seems to be just a personal slander, fir whatever purpose Jim is posting it. Only he knows the true reason for this article. But I am truly interested on how requesting boiled water for showers & screen for windows could make someone so irrate. Does it really make a differences how someone help? If a benevolent act is done for the betterment of an entire group dispite one individual inconvience. Our Government make those types of choices daily basis,but no one dare make a written statement concerning it. Those who may are very cautious about what they write or say.

I have been told that Jemison went up into space in September of '92 and also in august and May of the same year, what's the truth??

YOU ARE SO GREAT I USE YOU AS MY SCIENCE PROJECT THAT IS 400 GRADES I LIKE YOU AND I GO TO FOLEY MIDDLE SCHOOL AND MY NAME IS KENYATTA.

Hello, my nephew is doing a report on Mae Jemison. He is in the 3rd grade. Truly he's enjoying writing his report on a black woman pioneer. I am thankful that he does not have to see the negative garbage that is being written and I truly thank the Lord that negative input does not change the output of wonderful people of all colors.