Dr. Richard Derman thanks his Peace Corps service in India for creating his life's direction. 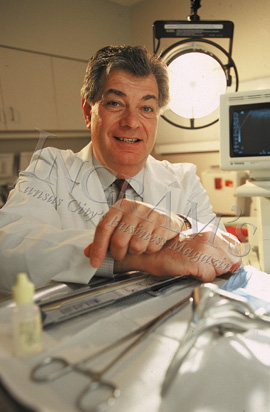 Dr. Richard Derman thanks his Peace Corps service in India for creating his life's direction

People who've served in the Peace Corps always say they got more from it than they gave. Dr. Richard Derman wholeheartedly agrees, for his pre-residency stint in India created his life's direction. Seeing the enormous trials and pains of the women in India led him to become an ob-gyn and then to get a degree in public health from Johns Hopkins.

From there, his life has been one filled with research as well as clinical success. At the University of IllinoisChicago, he helped create the comprehensive program that received one of 15 federal designations as a Center of Excellence in Women's Health.

That work moved him to Kansas City when offered the commitment from both Truman Medical Center and UMKC to use those successful models to create a similar center for Kansas City. This will be a concentrated and seamless continuum of care for women, made possible by the recent $1.3 million grant from the Hall Family Foundation. "The idea is to link the expertise at UMKC with clinical excellence and patient base at Truman. We will be able to play a major role in women's health care," he enthuses.

Dr. Derman has the Schutte Chair in Medicine Leadership/Women's Health from Truman Medical Centers and UMKC, where he is professor as well as associate dean. He is one of a handful of experts whose practice is limited to menopause, but he has been involved in research in everything from pelvic inflammatory disease to urinary pregnancy tests to alternative medicine. He's written a book on fertility control and edited one on hormonal therapy.

He says others probably call him a workaholic, but he's really very people oriented. Dr. Derman notes that it's funny how things come round - he's recently obtained another grant from the National Institute of Health to prevent women hemorrhaging to death at childbirth - in India. He loves each of the components of his workpatients, research, and collaboration. "I'm very excited about the collaborative effort I see going on in Kansas City. I hope to play an active role."

Given his energy level and commitment, he surely will.