Like a mamma cradles her Baby: A Story of Benin by PCV Sabrina Herman 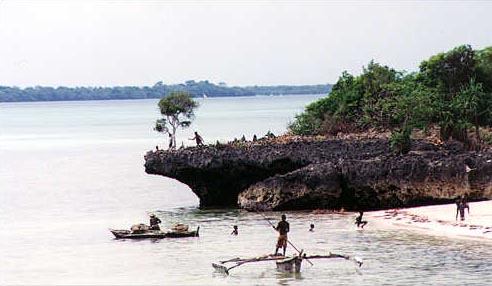 Sabrina Herman served in Benin, West Africa as a rural community health volunteer from 1998-2000. Her primary projects in Benin included health education, reproductive education, family planning and AIDS education. She also worked on efforts to support girls' education and the education of children with hearing impairments. Sabrina's professional background is in clinical social work she however, considers herself not only a social worker but a dancer, artist, writer, and photographer. Sabrina is presently living and dancing through life in Harlem, The Netherlands.

Max. I can say with conviction that he was one of my best friends in Benin during my Peace Corps service. He was my most trusty confidant. Best of all, he provided me with the unconditional love, the nonjudgmental, pure from the puppy heart kind of love that one so craves out there on one's own.

There I was, in a rural African village, with insufficientl anguage skills, parasites colonizing my belly and the blistering sun rays playing connect the dots with my freckles. I felt so far from home that I found myself seeking comfort in the simplest and most trustworthy of familiar pleasures; the sound of children’s' laughter, setting of the sun and the rising of the moon and in Max, my dear dog.

Max had a funny black & white spotted body with a black patch over his one eye. It always appeared to me as though he had one eye shut in reflection, and one eye gazing out onto the world. When I first met Max it was love at first sight.

Someone dropped him out of a rice bag and into a patch of manioc bushes. He was all shriveled up and shaky. It seemed, at the time, that he had been taken away from his mom way too early. He squirmed his little self into the bush and there he stayed, shaking and whimpering. My friends warned me not to touch him for fear he might have some strange disease. Despite the warnings, I went over to him, picked him up, wrapped him in a blanket and held him in my arms for a good long 3-4 hours.

From then on, it was Max and me, inseparable. From my arms into my backpack he went. I had a new companion to join me on my trek home to the small village of Agbanou. On my bike we rode, with the heat of the mid day African sun burning my already freckled face and the dust of the red earth drying my mouth.

It was the first time I didn't feel really alone. As I look back now, I suppose at the time it appeared a bit odd to the people of the village. In fact, I'll bet odd is an understatement. Women carry babies on their backs, not puppies. To most people in Agbanou, a dog is a guardian of the fields or, at best, a good protein rich meal. Needless to say, it was not customary to have a dog as a best friend. But it didn't matter to me then; I had bgun to doubt I could ever really belong to an African rural community, and had begun to cling to the somewhat glorified identity as 'the stranger.'

As time went on, Max would accompany me everywhere I went. He would come prancing alongside or would weave in and out of my feet. While we walked down the dirt path lined with green banana and mango trees to the school or to the local clinic, children would accompany us and play with Max.

As I wandered throughout the village, my new nickname became "Max-no," meaning ‘mother of Max’ in the Fon language, where mothers are commonly called by names of their firstborn. So I was officially, and proudly, deemed 'mother of Max' and many other mothers began to visit more frequently. Children would come often to play with Max. It was clear that he was slowly becoming a part of the community, and in my own way, through my own interpretation of motherhood, so was I.

Through Max I found a sweet balance in not having to relinquish my own cultural values and customs while at the same time respecting and opening up to those of Benin. It was a welcome change in my life: until Max I hadn't yet felt connected, accepted or understood. In hindsight I know that I simply hadn't opened the doors of my heart to the glorious connections that were right there, before my very eyes.

One day I told Max that we were going to visit the kids at the school. He got all excited chasing his usual goats around to show them who was boss. As we walked along the path to the school, all of the children ran up to greet us. As we passed the small market where the mammas sat each day, we were greeted by all with the usual warm Fon greetings: "A fon gangi a? A damply gangi a? Vi lo?" How are you? Did you sleep well and the child?.

Max was so warm and gentle with them. I remember these golden moments like yesterday.

I'm trying to get in touch with Sabrina. We were friends in Boston before she left for Benin. It feels like a long time ago. I've tried various web searches now and again and here is here name and her words but without any contact information.

I hope somebody can put us in touch.

Hello. My name is also Sabrina Herman. I live in Dayton OH and am also a social worker, although I work in a hospital. Not only that I used to work with the hearing impaired during my internship for my social work degree. I found this site by searching my name, and discovered there is another person by my name. Fascinating the things we have in common. Thanks for reading!

hello. My name is komla n.richard.i live in cotonou benin. a togolese born in ghana having a strong backgroud in languages i would like to encourage sabrina for the philantropic work she is doing in benin. i have the feeling for the abandon ones espacially the kids who are orphanes.
i am availling myself to offer my services to support sabrina. i teach, a slesman, an accountant.speaking french, english and spanish.
my contact is 00229 96-56-93-75.