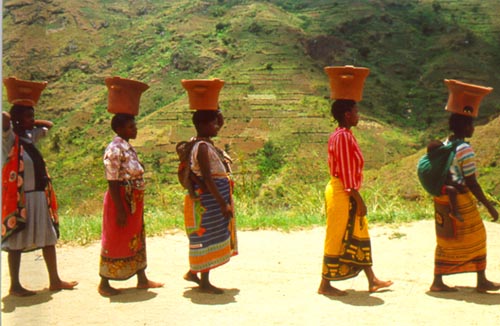 BY TOM O'NEILL
The Cincinnati Enquirer

They traveled to the world's most impoverished corners, these Cincinnati-area educators from the golden fields called America. But as they reflected this week on their Peace Corps volunteer missions, the enduring moments are not so much in the lessons taught, but the lessons learned:

"Third World" residents are often more knowledgeable about our lives than we are of theirs.
linkletter
Gayle Linkletter, left, holds 15-month-old Anthony Popenoe while he entertains his sister, Suburia, 4.
(Michael Snyder photo)
| ZOOM |

Family structure, music and education are valued everywhere. To help others is to help oneself.

The first-ever local conference of the corps' regional chapter begins today at the Grailville center in Loveland. For some, it will be a reunion. For all, it will be a story trading post.

"You become more appreciative of your own country, but also of how other people enjoy life every day in places where resources are different," said Barry Adamson of Forest Park, who from 1973-75 served in the West African nation of Sierra Leone.

"Not necessarily less," he explained Thursday, "but different. It's a humbling experience."

Mr. Adamson, 52, a Princeton City Schools administrator, is one of five former volunteers -- all educators -- who shared their stories with The Cincinnati Enquirer.

He will be reunited with Zella Falcone of the Dayton, Ohio, area, whom he hasn't seen in 24 years.

Of the 64 former volunteers attending the weekend event, 30 are from the Tristate. Cohosted by Cincinnati Area Returned Volunteers, the conference will draw regional members from as far south as Tennessee, as far east as western Pennsylvania.

And there will be the stories.

Darwin Popenoe will invariably get around to reliving the moment James Bwana walked into his Finneytown living room -- and back into his life.

Mr. Popenoe and his wife, Flora, whom he met while serving as head of the chemistry department at Minaka Secondary School in Kisarawe, Tanzania in 1985-87, opened their home last fall to nine African delegation members. As the group, the Phelps-Stokes Foundation, walked in, one was smiling broadly.

It was Mr. Bwana, a former student of Mr. Popenoe.

"He's now with a legal foundation," Mr. Popenoe said, making no attempt to hide his pride. "The happiness is because at that school, we were often frustrated that the students' English was limited. And the fact that he could get so far and help his country . . ."

Gayle Linkletter, 46, of Clifton, returned several years ago to St. Lucia in the eastern Caribbean, where from 1975 to '79 the French teacher lived in a ramshackle wooden cottage. The kitchen and bathroom were in other structures. Laundry was done by hand. Showers were cold and quick. The rural fishing community had one TV, which sat atop a box in the post office.

Walking through the village, she heard "Miss! Miss!" and looked up to see several former students whom she had wanted to visit.

By then, her perspective had changed forever. Back in the States, Ms. Linkletter had difficulty in grocery stores. She said the volume of food, and the casual way Americans take it for granted, was overwhelming. "We don't appreciate enough what we have here," said Ms. Linkletter, a sentiment echoed by others.

Elizabeth Macdonald, 33, of Blue Ash, who met her husband, Yon, while teaching English in the Central African Republic in 1987-90, agreed.

She emphasized, as did several of her colleagues, that the most important aspects of life aren't measured by money.

Bob Griffith, 55, of Finneytown, returned to Singida High School in Tanzania -- he helped build it, then taught math and English there in the 1960s -- and learned that former students had become priests, doctors and teachers. It overwhelmed him.

Peace Corps missions are for a minimum of two years, but the spirit behind them is forever.

And the taking, volunteers are convinced, is in the giving.