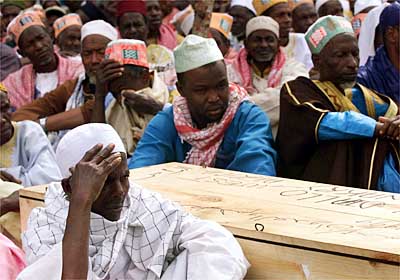 Becoming a Peace Corps Volunteer was one of my most earnest desires since the 8th grade. So when I arrived in Guinea, West Africa, in 1994, I felt as if I was embarking upon the beginning of my destiny. I can honestly say that my 27-month experience was one of the most colorful experiences of my life.

Just like all Peace Corps volunteers, I was warmly welcomed by my community from the minute I arrived at my site. As an African American I found serving in West Africa very exciting and educational. Many people in my small village of Bantignel, Pita had heard of Black Americans. They were aware that many slaves taken from the west coast of Africa hundreds of years ago eventually ended up in America. However, most of them had never seen a black American, so I was a novelty.

Various members of my community sought me out just to discuss our common ancestry and what being a black person in America was like. Conversely, I questioned them about life in Guinea, being black, world politics, and many other topics. One of my fondest memories was walking through the open air market and hearing people whisper to one another as I approached, "Americaine Noire, Americaine Noire" (Black American, Black American). After all the back and forth someone would finally muster up enough courage to ask me if I was really an American. My affirmative response left them awestruck.

On one occasion, a man approached me to tell me that he had never met a black American and was very honored to be standing face to face with me. Although I was saddened by the number of people who had never seen black Americans, I was simultaneously inspired that my two years in Guinea gave vast numbers of people the opportunity to see a different face of America. It made me feel good to know that I was able to shape the way others viewed both America and Black Americans.

I cannot speak definitively about other African Americans' experiences in the Peace Corps. Most that I know who served in Africa and elsewhere said that they were just as warmly received in their communities as I was in Guinea. Serving in places that are not used to hosting African Americans can be challenging in the beginning, but after a while, they are just welcoming and embrace Peace Corps volunteers like family.

In an effort to educate Americans as well as those we serve, Peace Corps is very committed to increasing the diversity of its volunteers. In doing so, Peace Corps is attempting to send out groups of volunteers who more accurately reflect the diversity of America, rather than the homogenous groups who were sent out in times past. As minority numbers in Peace Corps increase, the communities we serve will come to see America as the melting pot she truly is. Those communities will be more accepting of volunteers who do not embody what they falsely believed America to be. But you have to take the first step.

This story has been posted in the following forums: : Headlines; COS - Guinea; Special Interests - Minority Peace Corps Volunteers