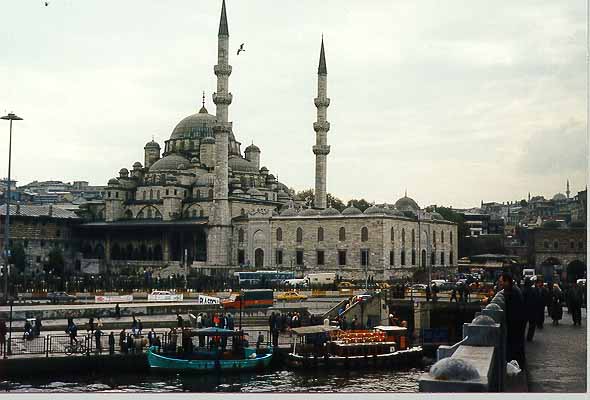 Having grown up on a northern Minnesota farm with no running water, Robert Olson was surprised to enjoy that luxury his first year in the Peace Corps in 1963. "I like you because you never complain," he recalls the Corps director telling him.

"That's because I'm the only volunteer whose standard of living has gone up since I've come to Turkey," Olson joked.

Today Olson is a University of Kentucky history professor and the recipient of the Graduate School's 1999 Albert D. and Elizabeth H. Kirwan Memorial Prize for his work in Kurdish studies, a field in which he is ranked among the top three scholars in the world. The Kurds are a people who primarily inhabit a plateau region in adjoining parts of Turkey, Iran, Iraq and Syria, and now comprise 25 million people living all over the Middle East.

"Bob should be noted for his broad and thorough familiarity with both the history and the contemporary circumstances of the region," says Cemal Kafadar, professor of Turkish studies at Harvard University. "He's a rare person, who can do both really well."

The significance of Olson's work is two-tiered. Not only was he the first scholar to publish a book recognizing that the Kurds played a major role in the settlement of World War I, he was also the first to argue, in his The Sheikh Said Rebellion and the Emergence of Kurdish Nationalism: 1880-1925 (1989), that the Kurdish nationalist movement is just as important as the control of oil in the Middle East.

Olson's overall term for the Kurdish nationalist movement and its effect on the Middle East is what he calls the Kurdish question. "If the Kurds were to be given their own sovereign state in northern Iraq, the United States would have easier access to oil reserves. But if that happens, the Kurds in Turkey might demand their own autonomous zone to be carved out of the southeastern section of that country, causing conflicts of interest between the United States and its ally," Olson says.

"A further consideration is that Turkey might, then, demand that Europe and the United States help them control the Kurdish movement if they are going to let water flow down to Israel and its Arab dependencies," he says.

The United States' concern over the Kurdish question makes the subject as relevant and real to Olson's students at UK as it is to students in Turkey, where the highest percentage of Kurds live. His book The Siege of Mosul and Ottoman-Persian Relations has been used at Istanbul University in graduate studies courses.

"It's clearly pleasing when the people with whom you're dealing translate your books into their own language," he says. In fact, four books that Olson has authored or edited have been translated into either Turkish or Arabic. He works in several languages, though primarily in Turkish, French, Ottoman (a combination of Turkish, Arabic and Farsi, which was the official language of the Ottoman Empire until 1918) and English.

Olson's accomplishments fit the criteria of the Kirwan prize well. His five books, 75 articles, and approximately 60 scholarly essays and reference works, combined with 70 presentations at colleges and conferences, are, indeed, "outstanding contributions to original research or creative scholarship," as the prize requirements stipulate. Last December his expertise led him to address the Kurdish question as one of two main speakers at a closed seminar conducted by the Institute for National Strategic Studies for high-ranking State Department intelligence and military officials, policy analysts of the Middle East, and political analysts who advise the president of the United States.

In an earlier life, the university history professor taught high school English in Hibbing, Minnesota. After his first year of teaching, he joined the Peace Corps and spent two years living and working in Turkey. Sometime during his second year there, he decided he wanted to be a professor of Middle Eastern history. "It was an exhilarating, eye-opening experience to be in another culture, especially an Islamic culture, and to be actively learning another language," he says.

Four books that Olson has authored or edited have been translated into either Turkish or Arabic.

Olson's fluency in Turkish came with practice, but not without an occasional blunder—like the one that occurred soon after his arrival in the new country. "When you visit someone in their home, you typically say, 'Your house is very nice and very comfortable.'" But in Turkish the word 'house' is very similar to the word 'wife,' and Olson mixed up the words on his first try at the compliment. "I said, 'Your wife is very nice and very comfortable.'" The mistake did not lead to a fistfight, only to a funny look from the hosts.

After returning from the Peace Corps, Olson attended Indiana University, where he received a Ph.D. in 18th-century Ottoman history. His mentor at Indiana, Wadie Jwaideh, was the most recognized scholar of Kurdish studies in the world at the time. Olson taught at Clemson University for one year and joined the UK faculty in 1973.

Because the Gulf War in the mid-1990s created an upsurge of Kurdish nationalism, Olson had several opportunities to write for Middle Eastern International, the premier political journal on the Middle East.

Just as Olson bridged the gap between America and the Middle East firsthand as a Peace Corps volunteer, he offers his students a similar connection through his passion for teaching about the region and its history. "The greatest richness in my intellectual and personal life has been my acquaintance with Middle Eastern peoples, cultures and civilizations," Olson says.

Unfortunately, he often finds that before he can teach his students anything about the region, he must spend time breaking down misconceptions—about Muslim fundamentalists, for example—that Olson says are perpetuated by the media. "The pejorative stereotype is quite distant from the truth," he says.

The field of Kurdish studies has grown considerably since Olson's first trips to the Middle East in the 1960s. And more young scholars are expressing an interest in the Kurds, a trend which pleases Olson.

He says there may come a time when he can no longer keep up with the younger scholars in his field. But until that time, interpretation of the Kurdish question is still in his hands: "I hope within the next two or three years I can finish a book on the Kurdish question in Turkish-Iranian-Syrian-Israeli relations."

Of all his accomplishments, Olson says that the Kirwan prize is the highlight of his career. "I was very pleased that the selection committee recognized my work. That was very gratifying."

"He has in his own scholarship increased the visibility of UK in what might be called the Middle Eastern studies community. No question about that," says Doug Boyd, acting director of UK's Office of International Affairs.

When Boyd traveled recently to the University of Texas-Austin to present a paper, he experienced firsthand Olson's scholarly renown. "The Middle Eastern experts there said, 'You're from the University of Kentucky? You must know Bob Olson!'"

While attending the Third World Studies Association Meeting in Costa Rica in November 1999, Olson says he was surprised when it was announced that his The Kurdish Question and Turkish-Iranian Relations: From World War I to 1998 was selected as the Outstanding Book for 1999-2000 published by a member of the association. Olson received his award immediately after the keynote speaker Oskar Arias (Costa Rican president from 1986-1991 and Nobel Peace Prize winner in 1987) had delivered his address.

"I was so inspired by his plea that the United States should stop all arms and weapons systems sales to Third World countries that I immediately announced that I would donate my award to President Arias and his Foundation for Peace and Progress on behalf of the Third World Studies Association and the University of Kentucky," says Olson.

The $5,000 Kirwan prize, presented through the UK Graduate School and named in honor of the university's head football coach from 1938 to 1944 and president from 1968 to 1970, recognizes outstanding scholarship over the period of four academic years. It is one of the top honors given by UK to a faculty member.

Hello Bob....a voice out of the past....both Turkey and I.U.---am learning to use the computer and am delighted to have run across your name here....and wish to high heaven I'd kept touch with all the special friends of Turkey II. How wonderful to see the success you have achieved...and that others recognize your work appropriately. Would love to hear from you or any others of the Turkey II group.
Rosie Suit/Corum

A colleague of mine has quoted someone who might be yourself as saying that the Israeli Air Force is planning to base 12 per cent of its Air Force on Turkish soil. Would you please confirm if you have stated publicly if this is so and, if you are the source of this information, would you please inform me of how you know that this is due to take place.