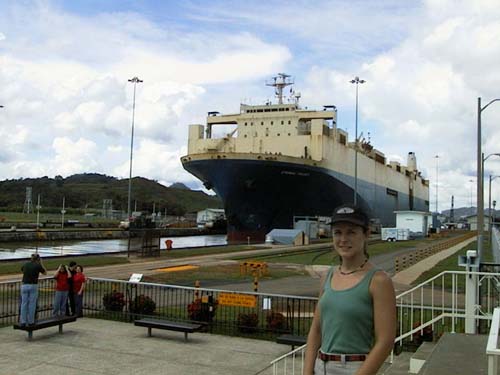 This is one of Cat's stories from her time as a Peace Corps Volunteer in Panama.

Nineteen hours and an unknown number to go, sticking needles in my eye would be more fun at this point. My body feels bruised and battered. Falling asleep is dangerous because each attempt is met with a startling smack of my head against the window as the bus barrels down the winding road riddled with potholes and bumps. I make a note to advise the next wave of Peace Corps Volunteers to bring a bicycle helmet for bus travel. The aisle seat is not a viable alternative unless you’re not squeamish about other peoples bottoms rubbing and propping themselves up against you as they stand in the aisle trying to maintain their balance.

Bleary-eyed, I stumbled off the bus in Changuinola, Panama. Two buses and a two-hour water taxi ride later, I am one bus and a canoe ride away from my final destination. At the district ranger station I meet the supervisor and one of his underlings. I will be spared the final hour-long journey by public van; we’ll travel together in their government pick up truck. We make it to the river in record time, and the old truck feels luxurious in comparison. The rangers locate their large dugout canoe chained to a tree and attach the outboard motor. We’re ready to go.

Chugging along at a steady pace, we battle up the wide rough river. The ranger is constantly reading the river and checking his position. The rapids swell and dip exposing and hiding boulders, his goal is to avoid the rocks and get his motor in one piece to the ranger station an hour and half up stream. This trip more than makes up for the arduous journey. Sitting in the canoe is like sitting in a giant elongated wooden bathtub. I look out over the sides, mesmerized by the grandeur and lush beauty of the jungle. An endless variety of vibrantly green trees gracefully hangs over the bank, with a variety of vines cascading down into the river. Toucans fly overhead - triggering memories of my favorite sugar coated cereal as a child. Parrots fly in thick sun-blocking flocks. Shore birds hunt and wade undisturbed as we chug by them.

The wild beauty of the river overwhelms me, and I can do nothing but numbly soak it in. In my exhaustion, I’m grateful for the motor that drowns out any possibility of awkward conversation between my host and me -- its grumble provides white noise for the journey I’m taking inside my mind.

The only signs of human life are occasional huts on stilts poking above low jungle growth, or a young man surfing on a crude bamboo raft traveling downstream.

Am I really here? Despite being a backcountry ranger in Yellowstone for several years, this kind of wildness takes my breath away. I am heading upstream to the remote ranger station in the International Peace Park that straddles both Panama and Costa Rica. I’m on my initial site visit, a three-day break at the midway point of the Peace Corps’ culture and language training.

In my mind, this is a true park: no hotdog stands, visitor centers, hotels, roads or rubber tomahawks to be found. A visitor must take the initiative to arrange for a guide, canoe, and provide his or her own supplies and food. There is no hand-holding by the federal government here.

On the flip side, the concept of a National Park system is a relatively new one. Panama, outside of the Canal Zone, is a simple ‘undeveloped’ country and there is little if any money to pay its rangers or provide them with training and resources. Rangers change with the political tide; there is no job security. To supplement their income, I will come to learn, some of the rangers poach the very wildlife they are employed to protect.

I am a Parks and Wildlife Promoter; my assignment is to promote the concept of parks and wildlife with the rangers and local communities. The first step is meeting with the King of the Teribe Indians, the only monarchy on the American continent. The King, or Queen, is democratically elected from a pool of living descendents of the royal family. The King oversees approximately 12 villages with a rough total of 2,000 subjects.

I will be meeting with the King to ask permission to live and work within the community as a Peace Corps Volunteer. I realize with a chill as I wait at the ranger outpost that my limited Spanish and sleep deprivation are a bad combination. I haven’t slept in well over 36 hours, but I am too tired to sustain the healthy fear I’d normally entertain with enough sleep. The adrenaline of the canoe trip is long gone.

There is a commotion below at the river as two large dugout canoes arrive. The King and his wife are easy to spot in the entourage. They have an air of ease and confidence that the others do not have. He is a head or so shorter than I am, but has a presence that places him several heads above me. I am just a bleary eyed foreigner with enough Spanish to be dangerous. It doesn’t matter that I have a college degree and six years of experience as a National Park Service ranger. It will be a struggle for me to communicate at a first grade level; hopefully he will give me the benefit of the doubt.

He is handsome with a gracious character, salt and pepper hair, warm brown almond eyes and a poker face. After a brief introduction, we sit. I am embarrassed to be directed to the head of the table. As the meeting begins, the room becomes blindingly white and begins to shimmer. I panic. I recognize the familiar sensations I felt after one of the all-nighters I pulled in college. My ears are ringing. I focus intently on their moving mouths trying desperately to glean something from the conversation.

“Chicken… Chicken…Chicken…” I begin to pick out a pattern in the conversation. “Ahhh they want to start raising chickens,” I think to myself. It is a popular program with volunteers and their communities in Panama. I go with the flow, tell them that Peace Corps has experience with such programs and it should be relatively easy to implement. Selling eggs and chickens downstream will help their economy and provide the community with a source of protein. This will lessen the impact of hunting the dwindling local wildlife. In my haze my confidence grows. I am amazed at how important and focused the King is on chickens. I come to the conclusion that they really like chicken products.

Something isn’t right though. I can’t put my finger on it but the King seems confused and increasingly frustrated. We talk about chickens and various project details a little longer. He suddenly smiles, ending the conversation and granting me permission to live and work in one of the villages. He requests that I devote my first months improving my Spanish and learning the local Teribe dialect.

The rangers invite me to stay at the ranger station, but all my Peace Corps training and local customs dictate that women volunteers should not stay alone with men. If I give into the cot whispering my name, beckoning me to collapse into a deep and much needed slumber, I will lose credibility and no self-respecting family would let their children near me. Part of my assignment is to teach Environmental Education to children grades 1-6. I humbly decline their offer, and they are visibly relieved.

Off we go. In my sleep-deprived stupor I can still appreciate and gawk at the river on the return trip. It’s hard to imagine that this beautiful place will be my home soon, and this ride a regular occurrence. The downstream trip takes half the time and the ranger only uses the motor when the river widens and slows.

One night, a week later, while I’m doing my Spanish homework and flipping through my dictionary, a word catches my eye: Apoyo (ah-po-yo) support, project, favor. Apoyo when said quickly the ‘a’ softens so that it’s barely audible. It makes it sound like pollo (po-yo) the Spanish word for chicken!

Mystery solved: it explains everything. During our meeting, I was musing how the Teribe people were a chicken loving society like Southerners in the United States who are purported to love fried chicken. I kept thinking, wow, this King is passionate about chickens. He wanted to know what kind, how many, how long to develop, asking many detailed questions about chicken. I would answer in kind. Only after going around and around did the King realize I was talking about chickens while he was discussing potential community projects.

I smiled at the thought of him walking away from the meeting thinking I was obsessed with chickens. Perhaps he’d seen a Kentucky Fried Chicken commercial in his travels to the capitol? “Americans must really love their chicken.”

My thoughts take it further, and I began to wonder, how many other chicken-raising projects have been started as a result of a similar misunderstanding? Is this the real reason for its popularity? I imagine leaders of local communities across Panama working with Peace Corps Volunteers, shrugging, “if they’re that passionate about raising chickens, why not let them.”

Americans perhaps now leave two impressions with Panamanians: During the Panama Invasion, seeing us as invaders or liberators (depending on their politics); and in peacetime, as promoters of the epicurean delight of chicken consumption.

This story has been posted in the following forums: : Headlines; COS - Panama; Peace Corps Stories