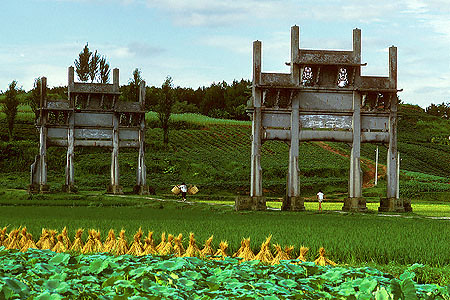 I came to Fuling on the slow boat downstream from Chongqing. It was a warm, clear night at the end of August in 1996 - stars flickering above the Yangtze River, their light too faint to reflect off the black water. A car from the college drove us along the narrow streets that twisted up from the docks. The city rushed past, dim and strange under the stars.

There were two of us. We had been sent to work as teachers, and both of us were young: I was twenty-seven and Adam Meier was twenty-two. We had heard almost nothing about Fuling. I knew that part of the city would be flooded by the new Three Gorges Dam, and I knew that for many years Fuling had been closed to outsiders. Other than that I had been told very little.

No Americans had lived there for half a century. Later, I would meet older people in town who remembered some American residents in the 1940s, before the 1949 Communist Liberation, but such memories were always vague. When we arrived, there was one other foreigner, a German who was spending a semester teaching at a local high school. But we met him only once, and he left not long after we settled in. After that we were the only foreigners in town. The population was about 200,000, which made it a small city by Chinese standards.

There was no railroad in Fuling. It had always been a poor part of Sichuan province and the roads were bad. To go anywhere you took the boat, but mostly you didn't go anywhere. For the next two years the city was my home.

A week after we arrived, everybody in the college gathered at the front gate. A group of students and teachers had spent the summer walking from Fuling to Yan'an, the former revolutionary base in northern Shaanxi province, and now they were returning to school.

It was the sixtieth anniversary of the Long March, the six-thousand-mile trek that the Red Army had made during the most critical part of the civil war, when the Kuomintang was on the verge of destroying Mao Zedong's forces. Against all odds the Communists had marched to safety, over the mountains and deserts of western China, and from Yan'an they had steadily built their strength until at last their revolution carried the nation, driving the Kuomintang to Taiwan.

All semester there were special events in the college to commemorate the anniversary of the march. The students took classes on the history of the Long March, they wrote essays about the Long March, and in December there was a Long March Singing Contest. For the Long March Singing Contest, all of the departments practiced their songs for weeks and then performed in the auditorium. Many of the songs were the same, because the musical potential of the Long March is limited, which made the judging difficult. It was also confusing because costumes were in short supply and so they were shared, like the songs. The history department would perform, resplendent in clean white shirts and red ties, and then they would go offstage and quickly give their shirts and ties to the politics department, who would get dressed, rush onstage, and sing the same song that had just been sung. By the end of the evening the shirts were stained with sweat and everybody in the audience knew all the songs. The music department won, as they always did, and English was near the back. The English department never won any of the college's contests. There aren't any English songs about the Long March.

But the summer walk to Yan'an was not a contest, and the return of the Fuling group was by far the biggest event of the Long March season. They had walked more than a thousand miles, all of it in the brutal heat of the Chinese summer, and in the end only sixteen had made it. Thirteen were students, and two were teachers: the Chinese department's Communist Party Secretary and the math department's Assistant Political Adviser. There was also a lower-level administrator, who had burst into tears in the middle of the walk and gained a measure of local fame for his perseverance. All of the participants were men. Some of the women students had wanted to come along, but the college had decided that the Long March was not for girls.

A week before the assembly, President Li, the head of the college, had traveled to Xi'an to meet the marching students, because at the finish of the trek they had run into trouble.

"The students have some kind of problem," said Dean Fu Muyou, the head of the English department, when I asked him what had happened. I think they probably have no money left." And it was true - they had run out of cash, despite their sponsorship by Magnificent Sound cigarettes, the Fuling tobacco company. It struck me as a particularly appropriate way to honor the history of Chinese Communism, to march a thousand miles and end up bankrupt in Yan'an.

But President Li had been able to bail them out, and now the entire student body of the college met in the plaza near the front gate. It was a small teachers college with an enrollment of two thousand students, and it had been opened in 1977, one of many that were founded after the 1966-1976 Cultural Revolution had destroyed much of China's education system. On the spectrum of Chinese higher education, this type of teachers college was near the bottom. Courses took three years and the degree was considered lower than a bachelor's, and nearly all of the students came from peasant homes in the countryside of Sichuan province. After graduation they returned to their hometowns, where they became teachers in rural middle schools.

Peter Hessler graduated with degrees in English from Princeton and Oxford and has written for several publications, including The New Yorker, The Wall Street Journal, The New York Times, The Boston Globe, and The Atlantic Monthly. A native of Columbia, Missouri, he currently lives in Beijing.

This story has been posted in the following forums: : Headlines; COS - China; Special Interests - Writing

River Town is a great book, especially for me, whose parents grew up in Huling. Peter did a good job to introduce the city, culture, people, traditions, etc. I don't believe anyone did this for Huling. The book made me decide to go back there and check the 'things' out for myself. For the past, my parents were the ones drave us to back there for a visit.
Anyway, I really love this book, and wish it can be translated to Chinese to share with people in Huling.
I am an engineer of Ford Motor Company in Detroit, Michigan, and wish to have the talent to do the translation for Huling poeple.
Thanks to Peter to write such excellent book for China and Huling.

I read River Town as part of my "research" to whether or not move to China to become a teacher in the Shanxi provence. It was suggested to me by a friend of my mothers who lived in China for the last 14 years and was an friend with the author. I was inspired by the book and completly enthralled with the experience. Because of that, I a 20 year old American woman, decided to journey a cross the world and contintue my hunger for chinese life and culture. It has been the best decision of my life and most of what he said in his book I can completly relate to. Peter is very accurate in his views of the culture and just the experience of being a foreigner in China. Reading his book has been a comfort to me. To know that someone went thought the same things as me and survived makes me much sane at times when I need it most. It has been so shocking and so wonderful,I would suggest this experience for anyone who wants to see the world with new eyes. I was also wondering, I wanted to possibly email Peter Hessler would anyone know of anyways I could contact him via email? It would be greatly appreciated. My email is Lindsaykolu@hotmail.com
Thankyou,
Lindsay Kolu

I was recommended this book by the head of my history department before departing to China for about three weeks in July. I really couldn't get into reading the book that much on my flight, but once I got back home everything in the book made sense. I spent most of my time in the Sichuan Province, Chengdu, and there were a lot of similarities with Hessler's and my personal experience. Great book, great writer...wish I could be back there again! email is truepatriot@comcast.net
Nic Fiorentino

I just picked a zeroxed copy of this booklet at a shop just outside the University gate here in Beijing ! So cheap !

Peter Hessler's book is great and captures the essence of what I feel when I am in China. I have been all over Asia since my first trip as a 20 year old American soldier in 1967. China is my favorite because they are so proud of their culture and they don't "westernize" everything.
I have noticed travelers to China either love it or hate it, there are no in-betweens. Happy traveling. I intend to read more of Hessler's books. My E-mail is howardav@aol.com.

i'm trying to reach Peter Hessler as the first spanish horses ( that is what the emperors rode) have been imported into China since the 11th century. i can't find a contact for him. Lisa de Granada in the Beijing Quarantine

I want to commend the description of the literature class reading Western poetry and performing Hamlet from a Chinese point of view for the politico-historical insight and humor.
Wish I could have the same disciplined Chinese teacher who mostly spouted out "bu dwei" to get Hessler to improve his Chinese in the Running chapter.
The Dam chapter has its merits discussing Chinese collectivism in the unusual sense, implying xenophobia or indifference for the things that don't concern a family unit directly.
I cannot wait to finish the entire work.