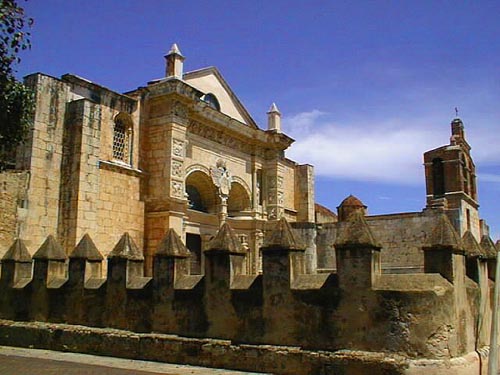 Many people throughout South Florida, as well as countless others throughout the hemisphere, breathed a sigh of relief when the 1998 hurricane season came to a close on December 1. It was the most destructive Atlantic hurricane season in 200 years and one of the most devastating ever in the Caribbean, with a total loss of life estimated at 15,000 or more (the actual number of deaths may never be known).

In the wake of the hurricane season and, in particular, its two exceptional tragedies, Georges and Mitch, attention in affected areas is focused on the recovery and rebuilding process. There are many dimensions to a hurricane, however, and two faculty members at the FIU International Hurricane Center (IHC) have been studying the politics of disasters.

Richard Olson, the We Will Rebuild Foundation Eminent Scholar, and Vincent Gawronski, a post-doctoral research fellow, have made several trips to the Caribbean and Central America over the past few months for both research purposes and to act in an advisory capacity for the U.S. federal agency charged with coordinating U.S. government response to catastrophes.

In addition, Olson and Gawronski are conducting two projects funded by the National Science Foundation. One is a study of the political and social changes that have taken place in Mexico City since the 1985 earthquake shattered its central core. The second, with a colleague at Southern Methodist University, is a study of disasters and political instability worldwide over a 25-year period. The two faculty, both of whom came to FIU last year from Arizona State University, also hold positions in the University's political science department.

Olson has been studying the socioeconomic and political aspects of disasters -- earthquakes, hurricanes, volcanoes -- for more than 30 years and has worked extensively with the Office of U.S. Foreign Disaster Assistance (OFDA), a division of the U.S. Agency for International Development (USAID).

In September, just about the time Hurricane Georges traveled from the Dominican Republic into Haiti, OFDA officials asked him if the IHC could send representatives to the Dominican Republic to help assess the politically charged situation. Olson and Gawronski were soon on the scene to study damage patterns in the battered nation.

"I was looking especially at the blame game," Olson said. "How blame (for the death and destruction) was being assigned and who was taking the fall." He found that the "official" death toll in the Dominican Republic ranged considerably -- from the 289 figure initially issued by the president's office to 1,200-1,400 mentioned by members of the country's congress.

"The political climate influences the official numbers on people killed," Olson said. "The death figures are highly political." He said that one of the "blame games" was to point to a breakdown between the country's meteorological service and civil defense that led to very late public warnings of Hurricane Georges' impact.

When Gawronski was in the Dominican Republic, the U.S. embassy personally handled the delivery of emergency supplies to affected areas (a practice that is practically unheard of), a move that reflected doubts about the ability of the Dominican government to ensure that supplies reached those in need.

Gawronski personally participated in delivering supplies to devastated areas. "Although I went down there as an academic, I wound up doing a whole lot of participating and not just observing," he commented. In November, he was invited by the Crisis Corps (part of the Peace Corps) in the Dominican Republic to present a briefing at a conference on disasters and development.

Olson said "Georges was going to be our hurricane of the year, then Mitch came along ....For Honduras, Mitch was a true catastrophe, with 70 percent of the land affected one way or another." The death toll from Mitch can still only be expressed in the roughest of estimates: 400 to 600 in Guatemala and El Salvador, 3,000 to 3,800 in Nicaragua, and no fewer than 6,000 in Honduras, with 8,000 people still missing.

Several weeks after Mitch struck, Olson made a presentation on the politics of disasters at a meeting of OFDA's Disaster Assistance Response Team in San Jose, Costa Rica. He and Gawronski have been asked to provide follow-up on reconstruction issues. "We'll be doing a long-term review," Olson said. "We'll be looking at blame, response and other issues."

Olson said that practically the entire infrastructure of Honduras was destroyed by Mitch, which will pose serious problems for years to come in terms of rebuilding -- and the likelihood of corruption influencing that arduous process. "We're going to have some truly intense reconstruction issues in the next couple of years," he said. "Unfortunately, the disaster business is growing."

This story has been posted in the following forums: : Headlines; COS - Dominican Republic; Crisis Corps; Disaster Recovery