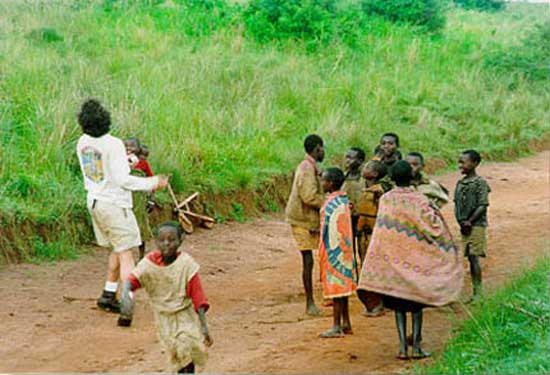 
Kevin Kramer of Clarksville held a picture of her daughter, Elizabeth, who might owe her life to the fact that she was late to work at the World Trade Center complex yesteray morning. Kramer said she "was just petrified" until her daughter called to say shse was safe.
Staff photo / Keith Williams

Because she stayed up late Monday night to finish a master's thesis, former Louisville-area resident Elizabeth Kramer was slow getting to her job with the Peace Corps yesterday morning in the World Trade Center complex.

The delay may have saved her life.

Minutes later, Kramer and others on the street heard ''a big boom'' and ''there was debris flying everywhere,'' she said in a telephone interview. ''Flames engulfed the towers. . . . It busted out windows. . . .''

When she was far enough away to feel safe, Kramer joined a long line of people at a pay phone and patiently waited until she could call her mother, Kevin Kramer, at home in Clarksville, Ind.

The Kramers were among numerous people from Kentucky and Southern Indiana with personal experiences or connections to the acts of terrorism that unfolded yesterday in New York City, Washington, D.C., and Pennsylvania.

Manoj Shanker, a state economist from Frankfort attending a New York conference, was in his room at a hotel located between the two towers, packing for the trip home, when the first airplane hit. Moments later, as he stood with thousands of other evacuees, taking pictures of the resulting fire, the second plane hit.

''I just felt the impact,'' he said. ''People just rushed. They were just set by the mania, and I was, too. As I ran, I was thinking, 'I'm in a movie,' -- you know we were all running and people were shouting for us to cover our heads.''

When he reached Chinatown, where the buildings are lower and allow for at least partial views of Manhattan, he noticed the skyline had changed.

Shanker called his wife, Kay, for whom time was standing still.

''That was a gut-wrenching experience,'' she said.

Others were still waiting last night for news about loved ones.

Her family yesterday hoped and prayed she somehow escaped and would call home.

''God willing, maybe she was down on the first floor getting a cup of coffee,'' O'Doherty said. ''But things don't look good.''

At an interdenominational prayer service at Hillvue Heights Baptist Church in Bowling Green, Harold Maxwell offered thanks that his sister, Marilyn Maxwell, was spared. She is a secretary with the Joint Chiefs of Staff at the Pentagon.

After the attacks on the World Trade Center but before the plane hit the Pentagon, workers had been given the option to leave the building, but Marilyn Maxwell stayed and picked up some paperwork in the south wing before returning to her office, he said.

''She closed the door, sat down and was blown out of her seat by the impact of a plane hitting the area she just left,'' Harold Maxwell said.

He did not know whether his sister had survived until he got a call from his nephew four hours later.

County Commissioner Darryl Owens' daughter, Dedra, was among the many people in Washington, D.C., who were evacuated from buildings near the White House and Executive Office Building.

Shively resident Martata Krages' best friends, Maj. Don. Vandergriff and his wife, Lorraine, both work in the Pentagon. Krages was unable to get through to her friends by phone or e-mail. All ''circuits are busy,'' she said. ''I'm just praying to God.''

Forty-two high school juniors from Sayre School in Lexington were on the National Mall when the plane hit the Pentagon, said Clayton Chambliss, head of the school.

He said the students were on the annual junior trip to Washington.

They were taken to a nearby park and huddled there most of the day, returning to their hotel by 4 p.m., Chambliss said. The students are to return to Lexington by bus today.

Principal Sandy Allen of Ballard High School in eastern Jefferson County said her daughter works on the 21st floor of the World Trade Center, but was not in the building yesterday because she is on maternity leave.

''I feel so sad for her because we don't know about her friends,'' Allen said.

John C. Long, a former writer and editor at The Courier-Journal, works at The Wall Street Journal, just across the street from the Trade Center complex. He said he cannot count the times he has walked around the center's plaza or visited its shops and restaurants since moving to New York City almost four years ago.

''When I got off work last night, I was standing there and looking at it,'' said Long, who works afternoons and evenings on the newspaper's copy desk. ''It was really a beautiful complex.''

Armando Arrastia of the Kentucky Department of Education worked on the 68th floor of one of the towers before moving to Kentucky eight years ago. When he heard what was happening yesterday morning, he stopped a meeting and turned on the TV.

''My first reaction was shock and fear for my friends and former colleagues,'' he said, before the towers collapsed. ''My prayer is that they are all right.''

Later, with the buildings reduced to rubble, he said he was too distraught for another interview.

''It's just amazing that anyone could do this,'' he said.

''She flew out of Newark at 7 this morning. I didn't hear from her till she landed in Louisville at 10:15 a.m. You can imagine what I was going through, not knowing what flights were involved, imagining what might have happened to her,'' he said.

''Then I found out a plane crashed near Pittsburgh,'' he added, his voice faltering. ''It was an indescribable experience to witness this thing going on nationally and be personally concerned about my wife.''

About 20 Humana Inc. executives, including Chief Executive Michael McCallister, were about five blocks from the World Trade Center when its towers crashed to the ground. The delegation was in New York to unveil Humana's new Internet-based health plan.

As McCallister and senior vice president Tom Noland were returning from a television interview at the American Stock Exchange, ''we noticed debris in the air,'' Noland said. They didn't realize what was happening until they saw a TV report.

Patrick O'Dey was on the phone in Louisville with a son who lives in Manhattan when the second tower collapsed. Though hundreds of miles apart, they watched on TV together in horror. ''It was very disconcerting,'' O'Dey said.

Dan Bischoff, the art critic for the Star-Ledger in Newark, N.J., described a scene out of a dark movie.

''All the tunnels and bridges and overpasses are crowded with people,'' the Louisville native said. ''The sky blackened. The streets were filled with people, their faces covered with black ash. Military jets were flying overhead.

''You have a black column of smoke you can see from here. It's like (a) science-fiction movie.''

Another Louisville native, Jolene Oldham, lives in New Jersey near Manhattan and had a business appointment scheduled near the World Trade Center yesterday afternoon. The attack, she said, has her longing for a more tranquil life in Louisville, a ''place that's not a military target.''

This story has been posted in the following forums: : Headlines; COS - Burundi; September 11