The Peace Corps in Poland - They came, did their work and are moving on... 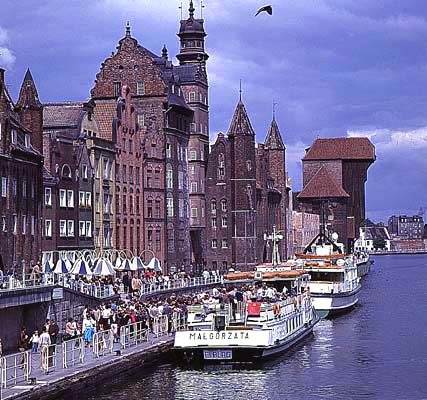 The Peace Corps in Poland - They came, did their work and are moving on...

The Peace Corps in Poland
They came, did their work and are moving on...

The Peace Corps (PC) came to Poland at the request of the Polish Government in early 1990. That is an undeniable fact, but it is only part of the truth. It wasn' t quite that simple. As one Chicago-based newspaper noted back in 1995:" Over the past few years, Mr Piszek has been concentrating on propagating the learning of English in Poland. Five years ago, he was the main force behind bringing Peace Corps volunteers to Poland."

The author was referring to Mr Edward Piszek, the Philadelphia philanthropist whose Copenicus Society publishes The World of English. He once said:" It is my dream that by the year 2000 the majority of Poles will have a working knowledge of English, enough to communicate with others." He has regarded both the Peace Corps and the magazine as means to that end.

Yes, the Polish Government did request the Peace Corps to come to Poland, but only after its education and finance officials as well as other authorities had been persuaded that such a need existed. In America, Piszek had to use his extensive contacts among congressmen and government officials in Washington, DC, to make such a plan a reality. The US government initially agreed to send only 60 PC volunteers to Poland, so Piszek appealed to the American Polonia for financial support and collected $10,000. He added $1.2 million of his own money to finance another 60 volunteers.

Although the Peace Corps has frequently been mentioned in The World of English, perhaps some of our newer readers do not really know what it is and does. Even some of our regulars may have forgotten. The Peace Corps (in Polish: Korpus Pokoju) was established in the early 1960s by the late American President John F. Kennedy to enable educated young Americans to share their knowledge and expertise with people of the developing nations. Recent university graduates and young professionals travelled to nearly every corner of the globe to teach in schools, provide basic medical care and introduce new farming, construction and business methods.

Everywhere they went, they tried to counteract the stereotype of the loud, rich and arrogant American by going native. For the duration of their two-year contracts they lived and worked alongside the local inhabitants and shared their living standards. In the underdeveloped countries of Africa, Asia and Latin America, that sometimes included living in mud or grass huts without any modern conveniences. In Poland things were not that extreme, but PC volunteers had to live on a Polish teacher' s salary, and in small towns their flats often lacked telephones.

Many readers of The World of English are probably most familiar with PC teachers of English. Such teacher is known to the entire school, and in small towns - to the entire community. But PC volunteers have also worked in other areas. Those with the proper training have assisted local governments in municipal management, environmental projects and privatization, and helped people get started in businesses of their own. One volunteer from New York, for instance, showed a Polish rural community how to take advantage of bumper fruit and vegetable crops which could not be profitably sold at harvest time. He taught them how to dry, store and sell them with a hefty mark-up later in the season. Others started up local tourist projects in economically depressed areas or worked to preserve the natural beauty of the country' s national parks.

One PC teacher of English was once extremely moved to hear a Polish student say:" I originally wanted to learn English so I could emigrate to the US, Canada or Australia. Now, after completing my English course with the Peace Corps, I will stay here and teach English to my countrymen."

While people in their 20s have constituted the single biggest group of volunteers, quite a few have been middle-aged. And there have even been senior citizens who volunteered to share their experience with those in need. But, regardless of age, they all began by taking an oath in the presence of the American Ambassador to Poland:" I do solemnly swear that I will support and defend the Constitution of the United States (...) that I take this obligation freely (...) and will well and faithfully discharge my duties in the Peace Corps. So help me God." Most have succeeded in keeping their promise.

A world of experience

But this has never been simply a one-way street. Peace Corps volunteers also benefit from their stay abroad. The experience gives them exposure to new people, languages and customs, expands their cultural horizons, teaches them to be resourceful and improves their problem-solving skills.

But all good things come to an end. The PC' s small business programme in Poland ended two years ago. A total of 226 volunteers had worked as municipal advisers, business trainers and privatization specialists. At least 65 others have served in the environmental programme. The final group of volunteers is expected to end their term of service in June 2001. By then, an estimated 863 PC teachers of English will have served in Poland. All told, by the time the Peace Corps ends its operations in Poland, as many as 953 volunteers will have been involved in its various programmes.

The Peace Corps likes to use what is popularly known as the 'fishing rod' approach. Emergency aid may be needed by disaster victims, but in the long run the most important thing is to teach people how to help themselves." If you give someone a fish, he will eat it and that' ll be the end of it. If you give him a fishing pole, he will be able to catch his own fish," explained Piszek who is a strong believer in that self-help philosophy.

In other words, the Peace Corps has got the ball rolling. Thanks largely to the efforts of PC English teachers, Poland now has nearly 20,000 native Polish teachers of English employed in schools of various types. That is an almost 17-fold increase over the 1,200 English teachers in Poland back in 1990. Many of them will go on to train and prepare other teachers long into the future, and they in turn.... The knowledge and skills demonstrated by volunteers in other areas will also continue to bear fruit in years to come.

End of an era

The Peace Corps will soon be saying 'Z.egnamy' to its many Polish students and friends, for it will be time to move on to help those in greater need. Poland is well on its way to becoming an economically developed country. The Peace Corps has made its own unique contribution to that progress. In welcoming the last group of PC volunteers serving in Poland, Daniel Fried, the US Ambassador to Poland, said:" You have an opportunity to witness one of the great success stories of the 20th century: nowhere has the democratic transformation that suppressed communism been more successful than in Poland. You will see Poland enter the 21st century, emerging as a confident friend and ally. You' ll watch a Peace Corps programme come to completion, even as you shape that programme. You' ll see history being made and you' ll have helped make it yourself."

We here at The World of English fully concur with Ambassador Fried' s remarks. We should like to take this opportunity to thank the many PC volunteers who have contributed items to our magazine and made use of it in their classes. And we also want to express our gratitude for all you have done to help the Polish people. We hope the challenges you have faced and the things you have experienced here will be helpful to you in later life. Good luck to you all!

This story has been posted in the following forums: : Headlines; COS - Poland