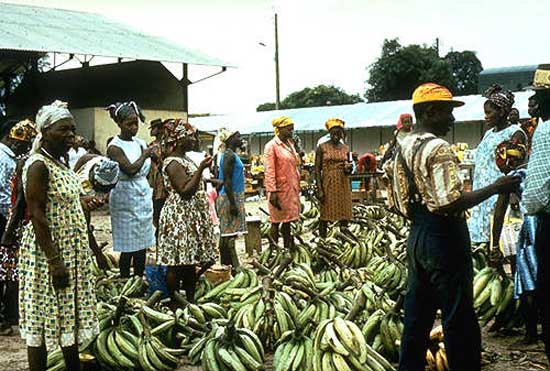 It was 23 years ago, fresh out of college, that I entered
the Peace Corps, yet the memories and thoughts of Gabon visit
me everyday. These web pages are my efforts to preserve for
my children, family, and friends the treasures of my volunteer
experiences. These pages are a work in progress so please
be patient with me as I slowly post photos and journal
entries.I hope you enjoy my efforts as much as I have in
preserving my memories and that they contribute to a love
and understanding of our brothers and sisters in other lands
and a more peaceful planet.

This web site is best viewed at an 800 X 600 resolution with Netscape.

Gabon straddles the equator on the west coast of Africa. I was posted in the north at Oyem and lived on the campus of a rural development school staffed by UNESCO employees (United Nations) along with Gabonese. I taught one pisciculture course (breeding of fish as a farm product) at the school and spent the majority of my time in the rural villages doing the same. These are the days of my life from training in Norman, Oklahoma and Zaire to my post in Gabon
from June 28th, 1979 to December 1st, 1981.
October 27th, 1979 The insects in Africa are quite diverse. Large and small, ugly and beautiful, and colorful and dull. Saw a grasshopper with purple wings and body length of ~23 cm! Get out of his way. Another bug was button size, fiery red, and ugly.
The high point of the day was swimming in Lake Tanganyika in our underwear and being chased out of the water by a huge hippopotamus. Local people on the shore spotted him first and were yelling in their native tongue to get out of the water but who understands Swahili. We didn't understand what all the excitement on shore was about but others in the water did and started leaving so we followed. Once out of the water we turned around and could see the hippo surfacing for air and looking like a whale and then submerging. We later learn that these guys can kill and are not the gentle and docile animals you think they are. The Africans respect them for the dangerous creatures they are and give them a wide berth.

December 25th, 1979 Christmas Day What a beautiful gift His people have given Him. I am talking about the Gabonese in church today. The dancing, movement, singing, and drums, what a celebration! I couldn't stop my eyes from watering. Women dressed in the same print of clothing swaying back and forth and singing in one voice; giving glory to God. It was absolutely heavenly. The mass was in Fang and mostly all singing. I missed having Christmas with my family but for that time in church I forgot my loneliness and was very happy. Christmas morning here isn't like in the states, no one opens presents. It is just a beautiful celebration that Christ is born and a time for a special meal with family. After mass, people are rushing to see the baby Jesus in the crèche. They touch Him. Women outside the church kneeling on the ground and praying. After mass, I prepared myself a tasty fish dinner all by my lonesome. My house mate and the other volunteers in town have all gone to Libreville for the holiday. Since I just arrived at my post, I felt that I hadn't earned any time off, so I stayed to do my work. Am I conscientious or crazy? I knew what to do to cure the blues, after my meal, I ran into town to the soccer stadium to watch a game and had some beers with friends. I have seen several people around here with legs and feet grossly swollen 2 to 3 times their normal size. To walk they have to shuffle or drag their feet.( It must be filariasis causing elephantiasis. The nematode worm, filaria, is transmitted by the bite of an infected mosquito or fly. From what I have read about it, you have to live in an endemic area for a few years before you can acquire it. Don't ask me why it was only a minority with the disease.)
These are the stained glass windows of the Catholic church in Oyem and drums are in the foreground


March 12th, 1980 Fête De La Renovation* Don't ask me what this day is about but it is good enough to have a parade for it. This was a parade of people not floats. There were lots of children marching in groups from their respective schools, dressing in the same colors. Women from the villages were dancing and singing. They were dressed in colorful "pagnes" (printed cloth that was used to make African style clothing) or native dress. All the women from one village or group would try and dress the same as the others from their village , right down to the green baseball caps in one case. The employees of cacao growers marched together in their printed T-shirts just like the rest of the local stores and organizations. It was pretty much advertising for the stores. A good number of marchers sported their President Bongo shirts or dresses. Lasting almost 3 hours, it was most enjoyable but the best was yet to come. At the end of the parade all the marchers and spectators gathered at a field near the center of town and started to party African style. They danced as they marched, in groups, along with drumming and singing their hearts out. It was quite festive. The parade ended at 1 PM and these folks were still going strong at 6 PM. Saw an old man playing the "ballafon", a xylophone instrument made with wooden keys that produces a very beautiful sound. What was interesting about this musician was that he had no fingers or thumbs on either hand and had sticks tied to the palm of his hands. He had a dish for money and I gave 100 CFA. There were a lot of Africans smiling as they watched the white man shaking to their beat.
*Anniversary of Renovation Day, also known as National Day, is held on Mar 12 and celebrates the anniversary of the founding of the Gabonese Democratic Party (PDG) in 1968. The PDG was founded by Omar Bongo and was the nation's only legal political party until 1990.

March 31st, 1980 Spent the night in a bus in Bifoun behind a rain barrier. When it rains hard, barriers go up so that vehicles don't rut up or get stuck in the clay surfaced roads. Didn't sleep at all on the bus, thanks to hard seats, mosquitoes, crowing roosters, radios, rain, and so forth. Really makes one appreciate their bed. Finally made it to Lambaréne about 10 AM, approximately 24 hours after we left Libreville. According to a travel guide, it is only 4 hours by car. Tonight a bunch of volunteers drank a few at a local bar and shared experiences in the villages; what fun and laughs. Also reminiscing about our training experiences in the states. There are a lot of volunteers from California and Massachusetts; either they lived there or went to school. One PCV had the same professor (Dr Nutting) I had at UMASS. Is this a small world or what?

April 10th, 1980 Is it a miracle? Yes, but only half of one, I finally received a used motorcycle that doesn't run. I haven't a repair manual or tools. I guess that could be the other half of the miracle, when it happens. I hope one of the fonctionnaires (government employee) will be able to help me. Hitched a ride on a full taxi bus so I rode on top with the bananas. You need a ride to spread the joys of fish culture, you don't turn down anything that is moving in the direction you are going. Unfortunately, the village I visited was empty because they were all at a wedding.

April 13th, 1980 I am bored and depressed with my lack of work with the villagers. I can't get out to see them without working transportation. Plus, I feel that I don't speak French well. Am I, my own worse critic? You think the price of gas is high in the states, well it doesn't help Gabon is a member of OPEC. The cost of 1 liter of gas is 150 CFA and that is equivalent to $2.88 a gallon. How is that for gas pains? Now, do you really hate those gas lines? I think, the true rainy season is with us. It has rained like crazy the pass 4 nights.

April 30th, 1980 Almost wiped out going up a hill in 2nd gear on my 50 cc motorcycle. I was going quite slow through some beer waste (there is a brewery in town) that was all over the clay dirt road. It was just like hitting a patch of ice. I had to stick my legs out and push off the ground in both directions as I ping ponged to regain my balance. This little moto only goes about 44 mph (70 km/hr) and that is fast enough for the condition of the roads around here. You always have to be alert for holes, wild animals, and on coming cars around blind curves. Pigs and goats will run right out in front of you and the snakes you will only see just as you are about to run over them. Tried to visit some farmers but they weren't home. If I had had to walk and no one was there that would have really bothered me but fortunately I now have the motorcycle. Taught my pisciculture class and applied the advice of one of my students; give each student a specific job and tell he/she when they are finished they can leave. It worked.


Me and my moto on an international highway of dirt. There were paved roads but very few. The town of Oyem had some but once you left town it was either a dust or a mud bowl you would experience depending on the time of the year. The mud was the worst because several things could happen. Your tires would get caked up with the stuff and you would stop moving, you would slide in the stuff and get covered with it, and cars and trucks would make big ruts and these are dangerous to drive into. So if it was a rainy day or had been raining a lot, I pretty much canceled any travel plans to villages and tried to do something useful with my time at home. The Gabonese government needs to pour more money into paving the roads. Good roads are an economic and development stimulus.

This story has been posted in the following forums: : Headlines; COS - Gabon