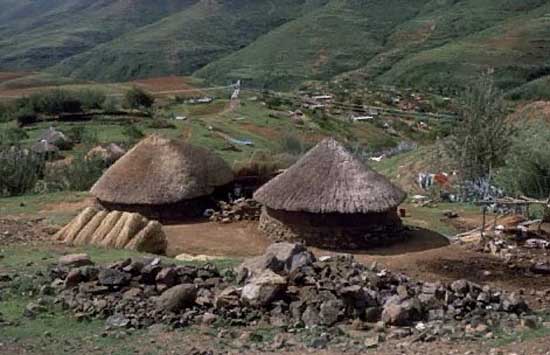 Longing for her family in Lesotho

At first, it sounded like a request you push to the back burner. What Matiisetso Monare wanted was to have her husband and three children, who live in Lesotho, a small country in southern Africa, join her for the rest of her stay here.

She was not pleading for their safety. There is no family or national emergency. Her fellowship is over in August, and August is right around the corner.

When an acquaintance told me about her plight, my first thought was, What's the big deal? It seemed almost gauche that she missed her family in light of the great opportunity she was getting. She can see them for the rest of her life, in less than two months. Just suck it up.

But my acquaintance was touched by her sadness. He thought I might be, too.

I agreed to meet Mati, as she signed her e-mail, at the Starbucks in Oakland early one morning.

I was sitting with my espresso, watching people come and go, when a small woman walked in. By the set of her face, her stride and body language, I guessed she was not American. Her hair was pulled into a bun behind her head. We made eye contact and exchanged the facial and hand motions that ask, "Are you --- ?"

She offered me the firm grasp of a delicate hand.

Across the table, she told me about her excruciating decision.

An independent economic consultant to small-scale entrepreneurs in Lesotho, she chose to accept a Malmberg Fellowship at the University of Pittsburgh's Center for International Studies. The family of a former Peace Corps worker in Lesotho set up the endowment in 1989. Enough money collects in the fund about every three years to fund a fellow for two semesters. Through it, Monare can make contacts that can help her in her work and help her country.

"I didn't know what to do," she says. "I thought that a chance like this would not come again."

The baby was 4 months old, the other children 7 and 5 when she left.

Monare began digging in her bag for a handkerchief as she told me this. Her eyes were brimming. She tried to steel her face. She hopped to her feet and pinched a napkin from a dispenser behind us.

In the silence that elapsed for the next few moments, I pondered the attitude I have held for so long, one I have been tinkering with lately, for reasons of my own -- that it is great, and necessary, to go off and do your thing. Your family will handle it because they love you, and besides, your goals and dreams cannot be denied. The independence of an individual to choose her own path always seemed to me an original freedom.

But when we go off and do our own thing, our emotional ties can stay strong for only so long. Who I am is not just who I am. Love is more than feelings. It is demonstrated through steadfast care and deed. For so many of us, this idea runs from inconvenient to implausible to arcane, like the idea of people who never leave their villages.

We want partnerships, but we also want a long tether for the things we want to do as individuals.

A friend recently described the necessity of the most solid partnerships, using the words "climbing into the other person's life."

Taken literally, it sounds suffocating, like two to a sleeping bag -- pretty sweet occasionally, but all the time? Taken as my friend meant it, it is a metaphor for committed love.

Mati isn't merely lonely. She wants her family to experience Pittsburgh, to share her life here. That she can no longer tolerate the void speaks of her wisdom. Opportunity aside, the most compelling need in the world, after food, clothing and shelter, is the nearness of your beloved people.

She has called the airlines. From Maseru, Lesotho, round-trip fares would cost from $2,600 to $3,000 for each member of her family. Forty thousand to 50,000 frequent flier miles would get one of them from London to Pittsburgh. My free miles couldn't get one of them out of Africa.

I looked at Mati, at her lifted chin, her sculpted face, her broad eyes. She was staring past me, her mind far away.

This story has been posted in the following forums: : Headlines; COS - Lesotho