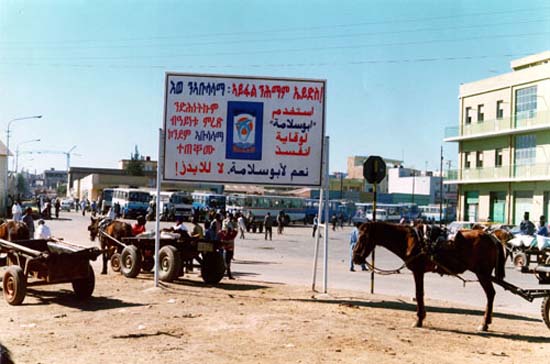 An Oregon Volunteer Lands in East Africa
by Mikey McKillip

I guess I wanted some adventure in my life. I wanted to see and experience some faraway place I'd glimpsed or read about in National Geographic. I wanted to learn new languages, experience different cultures and eat exotic foods. I needed a challenge. Teaching ESL as a member of the Peace Corps seemed the best way for me to reach those goals.

At the time I applied for the Peace Corps, I was taking classes and working at Portland State University in Oregon. While waiting for my application to be processed, (it took about a year) I worked as a volunteer instructor for the community ESL program offered by Portland Community College. Russian Oregon Social Services (ROSS) provided me another opportunity to design my own curriculum and teach ESL. In June of 1997, after months of hard work and research, I made the final decision to be placed as an ESL teacher in Eritrea, East Africa.

Eritrea is a very small country, about the same size as Pennsylvania, with a population of about 4 million people representing 9 ethnic groups. The main language is Tigrinya. Bordering the Red Sea between Sudan and Djibouti, Eritrea was colonized in 1952 by Ethiopia. In 1961, with the formation of the Eritrean Liberation Front (ELF), Eritrea began its struggle for independence. On May 24, l991 (Liberation Day) the Eritrean People's Liberation Front (EPLF) marched into the capital of Asmara. And in May of 1993 the citizens of Eritrea voted overwhelmingly for independence from Ethiopia.
Teaching Conditions

As a Peace Corps volunteer in Eritrea, I received 2 months of intensive language, culture and ESL/methodology training after I arrived in country. The teachers were both Eritrean university students and working school teachers.

I was assigned to the southeastern highlands of Eritrea in a small, remote village called Hadida. Hadida had one school, Hadas Eritrea (New Eritrea), which served grades 1-7. Students walked to school as much as 3 hours each way from surrounding villages. The school day was split into two shifts, morning and afternoon. Teachers were required to remain on the premises all day, beginning with flag ceremony at 7:30 am. and continuing until the end of the second shift at 6 pm.

Classrooms were crowded, with 80 or more students. There was one blackboard at the head of each classroom. Students sat at benches with flat narrow tops to write on, and were taught early on to copy all the information from the blackboard. It was very common to have as many as 3 and sometimes 4 students to a desk. Students did not change classrooms during the six-period shift, but remained in their seats with only one 10-minute break.

I was the junior secondary school English teacher for grades six and seven. The students' ages ranged from 12 to 24 years, with varying levels of English competency. The Eritrean Ministry of Education designed the school curriculum to incorporate English. Students were taught English as a subject beginning with second grade. After the fifth grade all subjects except Arabic (math, science, geography, history, sports, religion, and English) were taught in English.

Teaching English in Eritrea was a challenge. Most schools lacked an adequate supply of books. The Ministry of Education had worked with the British Government to produce a functional curriculum from which teachers produced lesson plans. My school had few books. When I arrived, I asked the school director if he had received a box of books distributed to all schools by the British Council. He told me he had. He then proceeded to unlock the storeroom where we found a set of New World Book Encyclopedias. However, after closer examination of the books we noticed the centers of the books were missing because termites had reached them before we did.

Lack of textbooks and resource books left much to the imagination of teachers. I often found myself creating games and interactive group activities as teaching tools. It took time to convince students and teachers that these activities were actual lessons. After teaching 32-35 lessons per week, I often would spend evenings and Saturday mornings teaching English methodology classes to Eritrean teachers.
Life in the Village

The village of Hadida had no electricity, no running water, and no toilets. The school did have a pit latrine but educating the students to use it was another story. A simple road that connected the village with the rest of Eritrea was usable during the dry season when there was absolutely no rain. Camels, donkeys or walking were the most viable means of transportation to and from Hadida. I found myself walking a great deal. It was a 3-hour walk to reach the main road and a 5-hour walk to the nearest town to retrieve my mail, food, and supplies.

When I wasn't teaching I enjoyed the welcome and inviting hospitality of my Eritrean friends and neighbors. Social time in Eritrea always revolved around eating spicy and delicious food and drinking coffee. I became quite accustomed to eating enjera (a spongy flat bread) with my right hand, using it instead of utensils to pick up other foods. One of the things I loved most about eating with my Eritrean friends was that we would often sit around a large round plate of enjera and feed each other while talking and laughing about the events of the day.

Unfortunately I was not able to stay in Eritrea as long as I wanted. In July of 1998, all foreign nationals were evacuated from the capital city of Asmara. Bombing raids from Ethiopia signaled the renewal and continuation of the war between Ethiopia and Eritrea. Because of the speed of our evacuation, I wasn't able to say goodbye to my students and friends. I miss them but still feel my time in Eritrea made a difference. I taught them English and they taught me what life is really about.

All things considered I would recommend to anyone interested in teaching ESL to give serious consideration to serving in the Peace Corps. Despite my abrupt departure from Eritrea, and the reasons for it, I still feel that my experience in the field was worthwhile. I cherish what I learned, including the hardships. The experiences gained in Eritrea continue to provide me with material I can share and include in future lessons.

Mikey McKillip is currently working with the African community in Portland to create an African Community Center.

This story has been posted in the following forums: : Headlines; COS - Eritrea