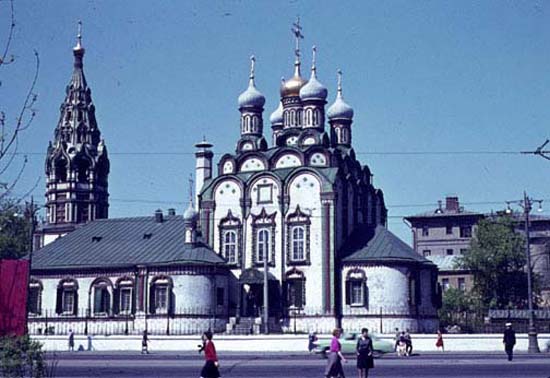 A Peace Corps volunteer discovers the key to fitting in: bring the perfect gift.

Courtesy Sarah Cameron
I KNEW MY LIFE had changed the morning I leapt out of bed and ran to buy a bottle of vodka. Clutching my brown paper bag, I hurried to school.

It was the Day of the Defenders of the Motherland, a Russian holiday honoring men. At school, female teachers gave small tokens to the male faculty in a ceremony. As I timidly presented the vodka, the room erupted into raucous laughter at the youngest faculty member's contribution to the party. I looked from one face to another, terrified that I had broken some cultural taboo. "Sarah," a colleague said with a smile, "I think you are becoming more Russian."

I puzzled over this. Yes, it was the first time I'd bought vodka as a gift and, most certainly, the first time I had waited in line at 8 a.m. to purchase it. And then, it hit me: the young American had made the true Russian gift.

As a Peace Corps volunteer living in the Russian Far East, I often feel as if I'm out of place or, in my better moments, an explorer. Although Vladivostok, the region's main city, was opened to foreigners in 1992, visas are still difficult to obtain. In remote villages, outsiders are even more unusual. People often stare when I speak English. When I first arrived, a colleague observed that the children looked at me "like an animal in the zoo."

I am a secondary school English teacher in Khorol, a village four hours north of the port of Vladivostok and two hours from the Chinese border. I am the only Peace Corps worker in my village of 8,000, though there is another volunteer 40 miles away, considered "close" by the standards of this vast region.

Americans often confuse the Russian Far East with Siberia or think it's located somewhere near Moscow. In reality, Moscow lies seven time zones away, and the region's nearest neighbors are China, Mongolia, North Korea and North America, just two miles away across the Bering Strait. When I graduated from Stanford last year and left for my two-year post in Khorol, I found myself in one of Russia's least developed regions. The Russian Far East is two-thirds the size of the continental United States and rich in mineral and timber resources, but it has a population of just 8 million.

Life is tough here. There is no hot water in the village, and in-home running water is inconsistent at best, so people must haul buckets up as many as five flights of stairs in subzero weather. Power outages strike several times a week, plunging homes into darkness for hours at a time. The school is so poorly heated that students and teachers can see their breath in wintertime. Teaching materials, classroom supplies and computers are scarce. (Several of the outdated textbooks I use contain such phrases as "Hello, my Soviet friend" and "In America, they are all crazy capitalists.") Russian teachers are paid $35 a month, if they are paid at all -- and they sometimes are not for up to six months at a time.

I am amazed at how people live and learn despite these obstacles. It was here, not at Stanford, that I finally began to iron, in part to keep up with my well-dressed colleagues. High school students take up to nine subjects at a time -- from chess to physics to economics -- and study by candlelight when the lights go out. My friends' cellars gleam with orderly stockpiles of potatoes, jam and pickled vegetables, products of a whole summer's work in the garden and enough food for an entire winter.

Perhaps the children here are the best models in the art of survival. Even 10-year-olds know how to bargain for milk in the market or find the cheapest place to buy eggs. My students burn with curiosity about the United States, their fascination instilled by tv shows like Baywatch and the soap opera Santa Barbara. They bear with me as I stumble through the nightmare of Russian grammar and quiz me about all the things the adults want to know but are too proud to ask: "Do all Americans have swimming pools?" "Why did your mother ever let you come to Russia?" And "Here, life is bad. In America, is it better?"

That last question is difficult to answer. To say honestly that most Americans take for granted all the things that Russians of the Far East cannot rely on -- hot water, electricity, heating, the promise of the next paycheck -- only widens the divide. Many ask me how many rooms my family's house has. As I tell my friends in the United States, "The number of rooms in my house is becoming smaller by the day."

Some days, when I find obscenities scrawled on my apartment door or confront the children on the far edges of the village who like to throw rocks at me, I am sure I will never fit in. More often, though, I feel privileged to participate in a culture that few know. The first day I went to school, I signed more than 100 autographs. I have been given enough jam and potatoes to last more than two years. I am known as nash Amerikanka, or "our American."

Last October 31, as I walked to school through the falling snow in full witch costume -- the better to teach students some Halloween-related vocabulary -- I realized I would never become completely Russian. But I do feel remarkably accepted into a society so different from my own. And one thing is for sure: I've learned what makes the perfect Russian gift.
Sarah Cameron, '99, is originally from Washington, D.C.

This story has been posted in the following forums: : Headlines; COS - Russia; Stories - Russia