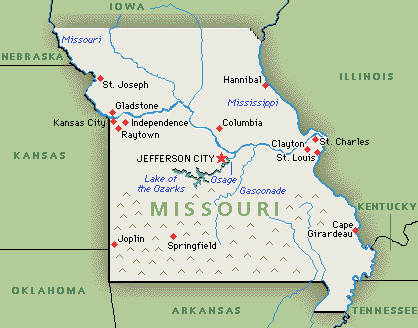 Tanya Jean Paul and the Great Pyrenees that herds their 100 goats to and from the pastures every day.

My friend Jerry Paul is a Missouri farmer. We met in the Peace Corps in Thailand 40 years ago. His job was to teach the Thais how to be better farmers, but I think his success had to do with giving them a better sense of humor.

Once he and a Thai friend came upon a group of villagers surrounding an elephant lying on its back in the ditch. They determined it was not yet dead, and everyone turned to Jerry, an American Peace Corps volunteer who knew everything about agriculture, and asked, "Can you cure him?"

Jerry searched his mind for elephant information, but could only recall Bomba the Jungle Boy. He realized they were not in the elephant graveyard known only to elephants and there were no Belgian ivory thieves lurking about, so he replied in perfect Thai, "My friends, I am an authority of sorts on sheep and goats.

With proper drugs and equipment I can cure diseases in cattle, and I can draw swine back from the very grave. But if yon pachyderm had so mu

Linda milks the goat directing the milk into a coke bottle. The milk will be used to feed the newborn goats (kids).

ch as a hangnail, I would be powerless to help him." Then he mounted his bicycle and rode into obscurity.

After leaving Thailand, Jerry and his wife and two infants spent two years in India, which he says is unmatched for its "unalloyed awfulness during the hot season."

Seeking a more moderate climate, he returned to his family’s pig farm in Bourbon, Missouri, the stench of which eventually led to his wife and children taking flight. To keep the bacon on the table, he taught science and German at the local high school, and married a teacher, Tanya Jean, who had a secret love for goats.

At our 40th Peace Corps reunion in Ann Arbor, Michigan, last August, Jerry and Tanya Jean made the mistake of inviting Linda and me to visit. We tend to accept all out–of–town invitations where homecooking is a possibility.

We arrived at the Paul farm on Memorial Day. It was at the end of the road 20 miles outside of Bourbon which is 50 miles from nowhere on the edge of the Ozarks. As we forded Brazil Creek onto the farm, we saw a clutch of folks raiding the barn. "My relatives come every four years or so and take anything not nailed down or on the hoof," Jerry said tugging on his overalls.

Jerry and his wife Tanya Jean operate the 400–acre farm his family has occupied since 1834. In ag circles it is known as Brazil Creek Boer Goat Farm. Their home sits high on a hill overlooking several barns, outbuildings, a creek, and a pond. It is quite idyllic.

We got to milk and feed some of their 100 goats and watch Jerry call 100 head of cattle from one pasture to another. Linda loved the goats ("They’re just like little puppies, kissing and climbing."), and adored the cows (They’ve got such beautiful eyes."). But the idea of coyotes roaming the hills and snakes swimming in the pond kept her on the narrow path.

In the evening, Tanya Jean prepared a wonderful Mizzou meal complete with General Tso’s chicken and a family–recipe bread pudding. Jerry and I reminisced about our days in the Peace Corps while our wives caught up on new quilting techniques.

Before daybreak, our hosts were out mending fences, milking goats, and feeding 10 chickens, 35 cats, and one very old blind dog. At a more reasonable time, Linda and I awoke to a full country breakfast Tanya Jean had "just rustled up."

While we downed the eggs, pancakes, biscuits, bacon, and ham, Jerry gave us a farm report: "It’s too wet to cut hay." "The price of beef keeps us humble." And "A fence that will hold water will hold goats."

Forty years is too long to miss good friends. I hope we get to see Jerry and Tanya Jean before another 40 years pass by.

Get The Columbia Star delivered right to your mailbox for just $20 a year. Stop by our office at 723 Queen Street, Columbia SC, or call us at 803-771-0219, and we'll be happy to take your information down and bill you for it later.

of their respective owners.

This story has been posted in the following forums: : Headlines; COS - Thailand; Goat Farming