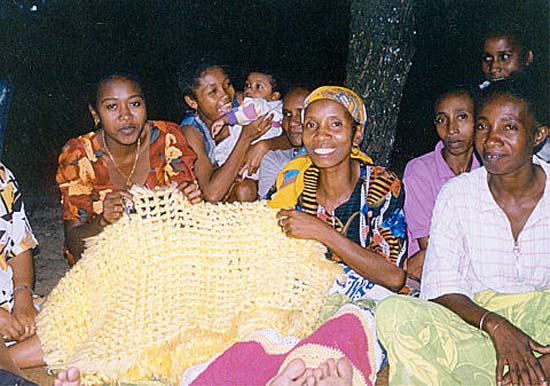 Most - if not all - of Amanda Wonson's 7th Graders will never set foot on African soil, they'll never set eyes on a West African burial ceremony or experience the technological indignities of life in a primitive, tribal village.

But Ms. Wonson's students know a lot of about daily life in a small village in Benin on the West African coast, where their teacher's friend now works as a Peace Corps volunteer. Through the Peace Corps' World Wise Schools program, Ms. Wonson's 7th Graders have been corresponding with her former roommate, 26-year-old Anna Tavares, and getting a bird's eye view of daily life in a third world country.

"This dialogue has given the students something more than a textbook could tell them, it has really given them a firsthand look at what life is really like there," said Ms. Wonson, who spent five months as a Peace Corps volunteer in Madagascar im 1999.

Since last fall, Anna and the students have traded a half-dozen letters. Because of the unreliability of the West African post, and Ana's sometimes difficult sojourns to buy stamps, the students sometimes write more often. But every five or six week, they are rewarded with long, descriptive letters from their pen pal, in which she answers the multitudes of questions posed her in a tight, measured script.

In February, Anna's latest epistle arrived. Written on blue French paper that is much longer than standard U.S. paper, Anna's message covered both sides of two sheets and cost her 450 Benin Francs to mail (about 74 cents). The letter explained that Anna chose to become a Peace Corps volunteer "because I wanted to work and travel in West Africa;" framed the accommodations in her village, "in a small village like Tchikpé where I live, there is no electricity or plumbing;" and the staples of Beninian diet "most people in the village eat corn, manioc (cassava) and locally grown leafy greens."

Writing to Anna not only fits in with the Geography portion of the 7th Grade Social Studies curriculum, it helps the students write letters, compile information and learn about other cultures, Ms. Wonson said.

"They get a firsthand look at a foreign country and a chance to work on writing skills, to keep on working on asking questions and finding information they can use in other letters or papers," Ms. Wonson said.

Benin is a small country that is bordered by Nigeria, Togo and the North Atlantic Ocean. A largely agrarian community, Benin is roughly the size of Pennsylvania and is a former French colony. The country's President Mathieu Kerekou, who was elected to a five-year term in 2001, is both chief of state and head of the government, and he appoints his Council of Ministers.

Anna, a health volunteer, works with a local non-governmental organization that is trying to teach the village's inhabitants about general nutrition, the AIDS threat, basic general health and preventive measures.

In her letters, Ana talks about how poor people in Benin are and how the houses aren't finished because plaster is so expensive. She has told the students about the expense of meat and why many Benin residents live on what they can grow in the ground. Anna has also talked about West Africans' impressions of the Western World.

Most of the West African she meets who have seen movies think they are real, and "many people think all Americans are rich and all Americans are white," Anna writes. "For some of them it's hard to grasp that the superpower of the world has millions of poor people."

Chris Pittman, a 12-year-old 7th Grader, said corresponding with Ana has helped him form a real picture of life in Benin.

"It's better than reading about it in books because you get to ask questions and get answers from someone who is really there, eating the food and breathing the air," he said.

"I like it because you get learn about other countries and you get to know and talk to interesting people," she said. "Sometimes it doesn't seem like your learning, but that you're just writing to someone you know."

Ms. Wonson, who emails her friend regularly, said she hopes the program sparks her students' enthusiasm for other countries, the way she and Anna got interested when they were younger.

"I want them to see that they are part of a global community and that they have access to opportunities that people in other parts of the world do not," Ms. Wonson said.

This story has been posted in the following forums: : Headlines; COS - Madagascar; COS - Benin; Third Goal; World Wise Schools