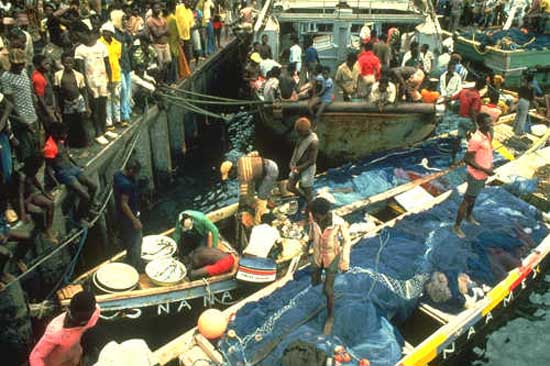 By JOHN DAVIES Of the News-Register

Despite his French background and comprehension of Spanish, Paul Goodrich's fluency in soccer has proven to be the most beneficial language during his endeavors in western Africa.

"Soccer is the glue," Goodrich said. "Somebody starts juggling a ball and all of a sudden the communication gaps are gone. Laughing, joking around, dancing around with the ball ... all because of soccer."

The McMinnville High grad was one of 12 recipients of the Peace Corps' Fifth Annual Franklin H. Williams Awards, honoring persons of color who continued to serve the communities of the world after their time with the Peace Corps.

Of French and African American descent, Goodrich, 35, was rewarded for his 12-year commitment to African Sports Outreach, the not-for-profit organization he founded in 1990 and continues to serve as president for. ASO provides soccer equipment, organized teams, coaches, medical needs, school funding, and AIDS prevention and literacy education. In return, street youths of western and South Africa involved in ASO must prove they are attending school.

Paul's father, Kenneth Goodrich, moved the family from Ohio to McMinnville to become head of faculty at Linfield College in 1983. Paul Goodrich began his schooling at McMinnville High as a sophomore with his sister and teammate, Karen.

Under the guidance of coach Doug Brennenstool, the Goodrichs were an integral part of the Grizzlies' first soccer team in 1984 - a coed group that managed a few wins in the highly competitive Metro League.

Due to a lack of available youth teams, and because of his recruitment by now longtime friend Casey Manfrin, Paul Goodrich joined the McMinnville Boons Soccer Club, an adult team playing in Salem. Manfrin provided transportation and Goodrich supplied the team with a tough midfielder.

"He was small, not anywhere near as physically imposing as he is now," Manfrin said. "But he was always really skilled and always played the whole game at midfield."

After graduating from Mac High in 1986, Goodrich returned to Ohio, where he became an NCAA Division III All-American for Wittenberg University.

Goodrich also trained and was an agent for McMinnville soccer standout Abraham Rubio, who played for the now-defunct Portland Pride indoor soccer team.

While attending Wittenberg, Goodrich became inspired by his African roommates and joined the Peace Corps after graduation.

Stationed in French-speaking Togo, Goodrich helped the small village Kpele-ele, enhancing their agriculture by implementing several improvements, such as converting hand labor into cattle-driven machinery, and of course, playing soccer in his spare time.

Serving for the Peace Corps and Catholic Relief Services, Goodrich continued connecting with people with his zeal for benevolence and passion for soccer, serving countries throughout western Africa and other parts of the world.

Furthermore, Goodrich declined an offer to a try out with Major League Soccer's Columbus Crew, as he continued his education at the University of Ohio, receiving his master's degree in geography. Aside from his charity work, he's been employed by the University of Portland and Nike.

Goodrich is coaching a U-14 girls team for the Beaverton-based club Westside, which won a state championship in May, and he will soon begin classes at Portland State University.

"I have had the privilege of writing many letters of recommendations for Paul," Manfrin said. "He just works for a good cause because it's a good cause. I don't know how he does it."

The notion to start ASO took flight in the early 1990s after a chance meeting outside a bakery in Senegal with former Peace Corps friend Desire Ayeh-Kossi Komi. They first met in Togo, about 4,000 miles from Senegal.

"We immediately connected: 'We have to work together,'" Goodrich said. The two brainstormed ideas every Sunday for a year: what can we do to help kids in Togo?

"So I gave him my Cannondale (bike) and $300 to take the train across the Sahara Desert and start ASO," Goodrich said. "Because he did that, I trusted him."

Ayeh-Kossi Komi still resides in Togo as ASO manager, relaying information to Goodrich in his Portland home and office.

Adamant about soccer and keeping kids in school, ASO began with one team in Kpele-ele, where Goodrich lived in his Peace Corps days with Ayeh-Kossi Komi.

Today, African Sports Outreach has provided $400,000 worth of soccer equipment to 75 teams in 11 western and southern African countries.

Goodrich and ASO have taken 350 Togolese youths off the streets. And although the goal is to educate the youth to flourish later in life, two athletes have gone on to play professional soccer.

"He doesn't just talk about doing good things," said Karen Manfrin, wife of Casey. "He does them all the time. He has ideas on how things should happen and he makes them happen. I think that not enough people do that kind of thing."

Most importantly to Goodrich, Abedi Pele is an ASO partner who runs a similar academy in Ghana.

The teachings of ASO extend much farther than the soccer pitch - they are lifesaving in nature and boundless in time. The organization prospers in ghettos of Africa.

In addition to the daily schooling and overall self-improvement skills taught at the ASO, 15,000 at-risk youths have been sensitized to literacy skills and educated about AIDS.

The staff of 10 in Togo, including Ayeh-Kossi Komi along with coaches, and teachers, have all been trained by World Health Organization and Catholic Relief Services on AIDS prevention. And although recently evicted from their school building, the team continues to educate youths on the streets in the thick of the ghetto.

After several years of balancing his job as a Nike recruiting manager while keeping the outreach program going, Goodrich quit Nike to go full-time with ASO in 2000.

"The feeling and power you have when you give back," Goodrich described of his reasoning behind his full-time commitment to ASO." There may be times when you have nothing, no salary, nothing coming in. But you hear from someone or you visit a site where people have received some of your work or equipment, or kids finish high school and college.

"They are blown over by your presence. They are so thankful. That's what keeps me going. I'm hooked on it."

This story has been posted in the following forums: : Headlines; COS - Togo; Soccer; Minority Volunteers; Sports; Service

i am a young boy of 18years from nigerian , i saw your profile on net, please i played good football. i need your assistant to get to my carrier destiny.beside i want to leave for togo very soon. please i,ll love to hear from you soon.