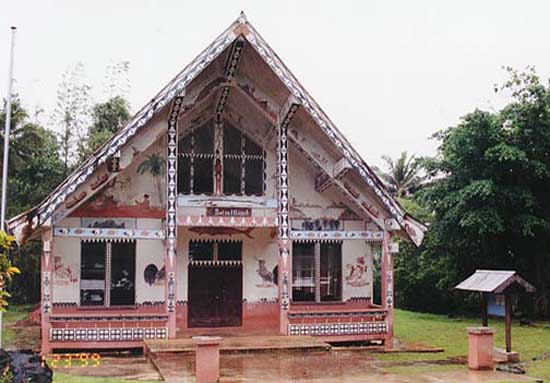 In other parts of the world, Peace Corps volunteers were able to embrace cultural ideas about women. Millie Becker is an 80-year-old Southside woman who started her service in the Peace Corps when she was 65. On the island of Palau in Micronesia, she taught at the Bethania school for girls.

"It’s a wonderful society. I came home realizing some of the faults of our own society," she says. "There are no nursing homes. They care for their own." Becker recalls lean-tos situated behind homes where a grandmother and great-grandmother would spend her days, always with a younger member of the family nearby fanning her face or speaking with her.

"My skin was white. I was old. They revere age over there," Becker says of the matriarchal society. "I had it made in the shade." Other lessons were learned. "The way they cared for family and their value system. There was no competition over who had the nicest dress. They were not competitive over things. There was no materialism."

When asked why she joined the Peace Corps, Millie Becker answers with quiet assuredness.

"I am a Christian, and it was God leading. It was through his grace," she says. After her two years of service, the head of the Bethania school asked to her stay. As a missionary, Becker worked from 1991 to1993 in the boys’ division of the school.

"My mission was to bring the Lord to them," she says. Following her faith, Becker came back to Indiana in 1993 with a different mission. Over the next few years, she sold off her home, car and all her furniture. In 1996, in her early 70s, Becker went back to Palau to continue her mission work until poor eyesight forced her to return to Indiana in 2000. A lifetime of service was interrupted.

After raising her two children, Becker had started college at age 57 while raising two adopted daughters. She spent seven years getting her degree in social work and graduated at age 64. After graduation, she took a job as director of social services with a nursing home in downtown Indianapolis.

"I became very discouraged because I wasn’t able to do what I’d like to do for the people there," she says. A friend at Becker’s church, Southport United Methodist, suggested she explore the Peace Corps. She applied and was accepted.

When Becker was assigned to Palau, she went to her local library and asked for the biggest map available of the Pacific Ocean. "There was this tiny little dot in the corner of this huge map," she recalls.

Palau is a tropical island nation made up of 16 states and more than 200 islands located between Guam, the Philippines and Papua New Guinea. Becker’s island was home to 10 villages along its coastline, and boat was the only real form of transportation. The dense interior is foreign even to natives, as the ground is rough, and there were only two roads when Becker was there.

Even today, all the islands of Palau, which is slightly more than two-and-a-half times the size of Washington, D.C., have only 38 miles of paved and unpaved roads. The two trucks Becker knew of on her island were used for transporting the staple vegetable taro or some varieties of fish from the main port. About two-thirds of Palauans are Christians. Most of the others practice Modekngei, an indigenous religion.

Becker taught English, typing, home economics and Bible study in the Bethania school for girls, a secure facility surrounded by lush forest. Many of the girls enrolled at the school were sent there to protect them from getting pregnant before high school graduation. Very few students came from two-parent homes.

"You never, never, never ask about the father of a baby," Becker learned from her first weeks in cross-cultural training. Having a child out of wedlock is the standard. If a young mother’s older sister could not bear children, it is appropriate for the older sister to take her sister’s child as her own.

"If a young woman didn’t have a child by about age 20, they were looked on as an aberration," Becker says.

There was no electricity or running water in Becker’s school, but an average 240 inches of rain fell annually during the May-November rainy season, so she drank rainwater. Asked what all Peace Corps volunteers have in common, Becker replies with experience.

"Adaptability, because it’s a necessity. You have to learn to adapt," she says. In terms of the slower-moving culture, Becker says she found that she was always several feet ahead of the Palauans and had to learn to slow down. "With the heat, you’d simply wear out."

Of the 54 people who joined Becker on the trip to serve in Palau, 16 returned home before their two years were completed.

This story has been posted in the following forums: : Headlines; COS - Palau; Older Volunteers; COS - Ghana; COS - Nicaragua; COS - Lesotho

Hello there miss Becker! i want to thank you for teaching me how to sow my very first skirt in home ec, i'll never forget that!!. How've you been after all these years? Hopefully, i'll hear from you all my wonderful Bethania High Sch. family..Love and prayers in Christ..