Laurie Logosz is joining the Peace Corps and going to Albania 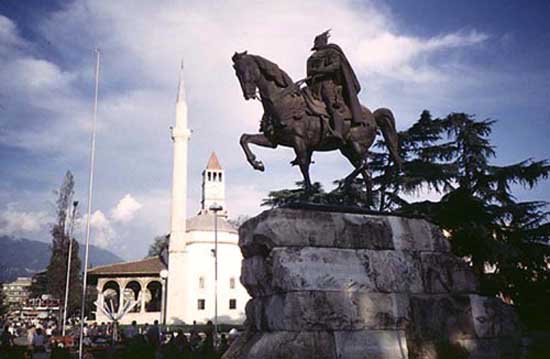 Laurie Logosz is joining the Peace Corps and going to Albania

Giving Peace Corps a chance
Off to Albania

SUTHERLIN -- Laurie Logosz of Sutherlin isn't afraid of the unknown.

If she was, she would never have agreed to move to Albania, where she will live among strangers, learn a new language and earn a meager stipend. To Logosz, these shortcomings aren't obstacles -- they're opportunities.

"I thought this would be an amazing opportunity to help other people," Logosz said. "I thought it would be fun, well maybe not fun, but challenging."

Logosz, 24, who recently graduated from Oregon State University with her master's degree in business, is joining the Peace Corps. Through this international organization, she'll be moving to Albania, where she will live for two years.

Although unsure what her responsibilities will entail, she does know she'll be working with businesses and the government to enhance local commerce.

Logosz was interested in the Peace Corps because it gave her a chance to live abroad and immerse herself in a new culture. To enlist, she first had to complete an extensive application, prove she had a college degree and take a medical exam. She turned in all her paperwork last October, and she received word of her acceptance and imminent departure to Albania in July. Her journey begins next month.

Logosz's parents, Andy and Ginny Logosz, said they weren't surprised by their daughter's move. Although they'd rather keep her close to home, they also know this experience will be good for her.

"What Laurie does doesn't surprise us," Ginny Logosz said. "She's gotten her B.A., she went on to get her master's and then she decided to be a river guide. É She's just kind of blossomed. She decided to be her own girl."

The Peace Corps was established by President John F. Kennedy in 1961, and according to its Web site, the organization's mission is to bring clean water to communities, teach children and help start new small businesses around the world. Since its inception, more than 168,000 Americans have joined, serving in 136 nations.

What makes Laurie's trip even more meaningful, she said, is knowing she's among the first group of Peace Corps members returning to Albania since 1997.

Six years ago, Albania was deemed unsafe for volunteers because of rioting and revolution. Now, with the formerly Communist country trying to establish itself as a democracy, the Peace Corps is returning to lend assistance.

Once reaching her destination, Laurie will spend the first three months learning about the culture and how to speak Albanian. She will then live with a host family in a village, and she'll be charged with familiarizing herself with the locals.

In exchange for her service, she'll be provided with free room and board and a small stipend. The longer she stays on the job, the more time off she'll accumulate.

"Sure, it'll be very, very difficult -- being thrown into a language I don't know at all," Laurie admits. "But I'm mostly excited. I love going to other countries and (experiencing) other cultures. I'm a little scared. I'll miss my family and friends, I just hope they'll come to visit me."

Laurie said she has no plans to return to the United States until her term of service is complete. She prefers to use her free time to travel around Europe. While working, though, she said her primary goal will be to make a difference.

"I won't change the world, but I hope to help with a small piece of it," she said. "I might not get to see any results, but I want to build a foundation. I want to be helpful in some way."

Ginny said she's confident her daughter will accomplish just that -- it's in her makeup.

"I see a girl that has just grown in such confidence in strength and character," she said. "She has a deep sense of ethics and fairness -- she's had that throughout her life. Her deep faith in God keeps her strong, and she's held true to that throughout the years. I think that pretty much says it."


* You can reach reporter Erin Snelgrove at 957-4208 or by e-mail at esnelgrove@newsreview.info.

This story has been posted in the following forums: : Headlines; Recruitment; COS - Albania