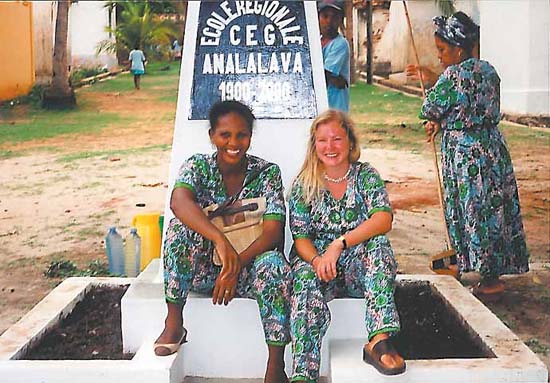 Caption: Emily Rudge, right, sits with the librarian from the middle school she taught at in Madagascar.

But instead of colorful classrooms filled with games, books and posters, Rudge's classrooms had bare walls, wooden desks and little else.

"I couldn't hang anything on the walls because the termites would get to them," she said. "And most of the classrooms had blackboards, but some were really crumbly."

They had to keep the windows open all the time, Rudge said, because the heat was so overpowering.

At home in Rudge's one-room house, she couldn't hang any pictures on the wall either, she said, because of the termites.

Rudge lived in Analalava, a village of about 1,000 people in northwest Madagascar. There was no running water in the village, she said, so she had to lug buckets of water back from the springs, and during her first year in the village there was only electricity from about 5:30 p.m. to 11 p.m.

The second year, Rudge said, the village got electricity full-time. But she still had no running water, and the outhouse was about the length of a football field away from her house.

But even after hiking nearly 80 kilometers (about 50 miles) in flip-flops with a group of friends, riding a boat for six to 12 hours "depending on the boat's motor" to get to the town where her bank was, and having to leave most of her belongings behind and evacuate the country early due to political unrest, Rudge said she enjoyed her two years in Madagascar.

"I just had the greatest experience there," she said. "It is a very beautiful country, and the people are almost unbelievably nice and welcoming."

The Peace Corps put the volunteers through three months of training at a central location in Madagascar before sending them to their sites, so Rudge, who had learned French at Mary Washington College in Virginia, had a chance to learn Malagasy, the native language.

During the training, Rudge lived with a family, which helped her work on her Malagasy skills. Madagascar has two official languages, French and Malagasy, but there are hundreds of different dialects.

Now, all of her kindergarten students speak Spanish, a language that Rudge is trying to learn as quickly as possible with the help of her Spanish-speaking aide, Monica Paez.

Gretchen Keefner, principal of Hilton Head Elementary's Island Academy, said she is excited to have Rudge on staff because she brings a different perspective.

"She knows what it's like to go to another country and be a second-language learner," Keefner said. "She can walk in the footsteps of the students as they come and acclimate (to the United States), learning the customs and the language."

Plus, Keefner said, it is nice to have a French-speaker on staff, because Hilton Head's foreign students come from many different countries and are not all Spanish-speaking.

Rudge said she actually found it easier to teach middle- and high-school students in Madagascar, partly because of their age and partly because she was able to communicate with them more in their native languages.

In Madagascar, she said, the students "really respect the professor."

Rudge said she is also a little "overwhelmed" at the number of books, posters, learning centers and teaching tools people use in the United States.

"The teachers (at Hilton Head Elementary) are really great," she said. "Every day they're saying, 'Here, use this, look at this,'" but it is very different from what she is used to.

Rudge said she decided to go into the Peace Corps shortly after she graduated from college because "I was feeling so overwhelmed by the excesses in America and I wanted to give something back."

Also, she said, it was partly for "selfish" reasons, to learn from the people and have the cultural exchange.

After she got back, she moved to Boston for a while but moved to Hilton Head in August after learning about the teaching job on the Internet.

Rudge has been in the Lowcountry since the beginning of August, but she said she is enjoying living on Hilton Head Island.

Reporter Jennifer Moore can be reached at 837-5255, ext. 122, or jnmoore@lowcountrynow.com

This story has been posted in the following forums: : Headlines; COS - Madagascar; Secondary Education