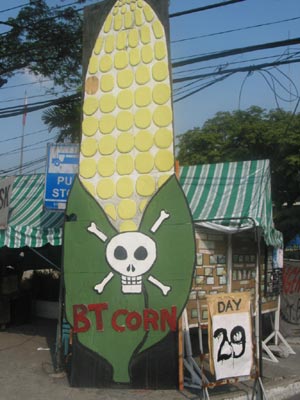 BAGUIO CITY–For three days now, a former American peace corps volunteer only drinks mango juice and water since he started a one-man hunger strike here on Thursday in protest of the reported entry of Bt corn, a genetically modified organism (GMO)-type product, into the Philippines.

Andrew Haralam, 29, originally from Philadelphia, Pennsylvania, and a resident of the Philippines for several years, said he is protesting the introduction of Bacillus thurigiensis (Bt) corn product into the country because of concerns about the ill effects of the product to the environment.

“As an environmental activist, I am protesting the introduction of Bt corn in an effort to protect the ecosystem in general and preserved the indigenous strains of corn in particular,” said Haralam in a statement he distributes to individuals who walk past Malcolm Square, the venue of the hunger strike.

Haralam claimed that he had read several reports about the Bt corn and he claimed that the possible detrimental side effects of the GMO product to the environment include agriculture homogenization, immunization of target pests.

He also warned that Bt corn could cause stomach and colon cancer, birth defects and neurodevelopment disorders, which are all irreversible.

He called on the government not to allow Bt corn into the country. Haralam said,” Please do not contaminate this beautiful land with poison, either with the chemical or the genetically engineered variety.”

He expressed optimism that the refusal of Bt corn into the Philippines would set a precedent for other Asian countries to oppose the entry of Bt corn and other GMO products.

Haralam, together with four other environmental activists who are also conducting a hunger strike in front of the Department of Agriculture office in Manila, said they found an opportunity to take a stand for something they believe in.

The environmental activists hope to make a difference and gain support from concerned citizens and groups.

This story has been posted in the following forums: : Headlines; COS - Philippines; Advocacy; Speaking Out; Ecology; Genetically Modified Organsims