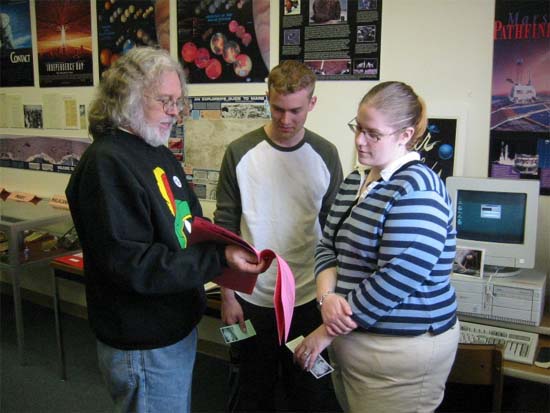 Welcome to Mars: Mars Room Attacks 'The War of the Worlds' with a New Twist


Caption: Dave Theison explains some facts about Mars to a rapt audience (in the background, the War of the Worlds radio broadcast CD is playing on the computer).

The Red Planet's mysterious presence is felt here: funky flying saucers and bubble-headed martian lights decorate the ceiling and a spongy red plant blooms atop a reading table. The walls are covered with posters from films like "Contact," "Independence Day" and "Mars Attacks!" You don't worry about being alone, because Marvin the Martian is there to greet you upon entrance.

No, you're not at Twilight Zone, but "The War of the Worlds: Mars in Fact and Fiction Room," a recently-formed creation that's tucked away in a cozy corner of Hornbake's Non-Print Media Room.

The Mars Room, the brainchild of Dave Theison, serves as an educational and fun addition to this year's Terrapin Reading Society book-of-choice, The War of the Worlds by H.G. Wells. It was Theison, a university astronomy instructor, who nominated the book about alien invasion that's currently being read by students, faculty and staff throughout the university.

Although the book was first published in 1898, The War of the Worlds has never been out of print and has since spawned many different versions via books, radio broadcasts, television shows, movies, CD-ROMs and even trading cards."It shows how popular invasion stories still are," Theison says. "What's noteworthy about the The War of the Worlds is that H.G. Wells invented the alien invasion story and it's the thought of our vulnerability to such a cosmic threat has been with us ever since."

It is the wealth of multi-media forms of the book which inspired Theison to create the room. "Almost everybody remembers the 1938 Orson Welles radio play, but there's also a 1953 movie, a 1978 rock-and-roll version with British rockers," says Theison who teaches a variety of classes including "The Science in Science Fiction" honors class. "When I play it for my students, they cringe because it's 70s-style rock."

The room features dozens more versions of the Wells classic in book, newspaper, audio and video form. Some of the unusual gems includes a 1990s version performed by some of the cast members of "Star Trek" as well as an Oldies 100 radio play that was performed on Halloween night 1997 and featured Washington, D.C., as the alien's target and Mayor Marion Berry greeting the extra-terrestrial visitors on The Mall.

"A teacher could bring his or her class over here and pick one of these versions of The War of the Worlds to look at or listen to during classtime," says Theison.

In addition to The War of the Worlds memorabilia, the Mars Room is chock full of information about the planet Mars and extraterrestrial pop culture like Marvin the Martian miniatures and Roswell, New Mexico knick-knacks.

"This is really meant to be a fun place as well," says Allan Rough of NonPrint Media Services. A fan of science fiction, Rough helped Theison compile some of the materials for the Mars Room. His favorite item in the room that's always "under construction" is a replica of the rumored face on Mars made out of styrofoam and sand.

"The War of the Worlds is an invasion story, but it's also a story of first contact between our species and an extraterrestrial species," says Theison. "I tried to use the idea of human contact with intelligent aliens as a guide in collecting items for display in the room."

Theison has been a longtime science fiction reader, starting with the book 20,000 Leagues Under the Sea by Jules Verne when he was 12. With The War of the Worlds, he says it was the idea of Mars being populated with intelligent, technologically superior creatures which kept him fascinated with the story as a pre-teen.

This semester the Terrapin Reading Society, sponsored by the Office of Undergraduate Studies, will feature a film festival featuring movies like "Independence Day" and "Invasion of the Body Snatchers." Theison hopes to also start weekly discussions in the Mars Room in addition to other activities.

Theison invites faculty, staff and students to explore the Mars Room. For more information on the Terrapin Reading Society, visit their website at www.inform.umd.edu/UGST/TRS

This story has been posted in the following forums: : Headlines; COS - Fiji; Astronomy; University Education