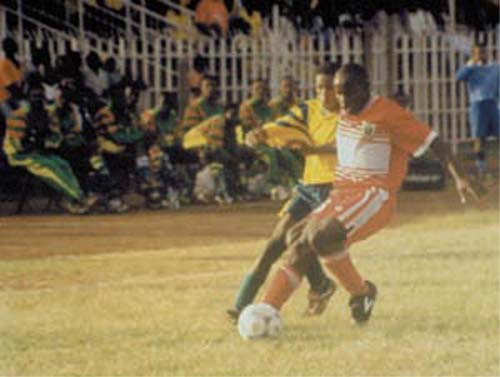 A Vital Goal: Soccer Poised To Even the Score for Women

Jackie Robinson often is credited for having struck one of the greatest blows for civil rights when the African American player made it to baseball's major leagues. So respected is Robinson that his name has almost become a noun, roughly defined as an athlete whose performance is so extraordinary in the face of adversity that it inspires not only a group of people who are socially disadvantaged or even persecuted, but an entire society as well.


For women the world over, their Jackie Robinson may well arrive someday as a young lady kicking a soccer ball.

Invoking a male sports icon during the Women's World Cup might seem sacrilegious to traditional sports fans. But what baseball was to sports in America during Robinson's era is what soccer has always been to the world: the center of the universe. While comparing the triumphs of the U.S. women's soccer team to the pioneering of Jackie Robinson is quite the overstatement -- the status of women in the United States cannot be compared to the racism endured by blacks in the 1940s -- it is no stretch to equate the plight of women in many other countries today to that of African Americans back then. Barbarities committed against women by the Taliban may get the headlines, but the fact remains that in much of the Third World -- including the Christian part -- women still are treated like second-class citizens.

Soccer as a social force for empowering women is not a novel idea -- there's already been a movie about it, "Bend It Like Beckham." But expanding on the movie's premise, if soccer could so affect an enclave in an industrialized country, imagine the global impact on women's rights if a soccer-crazy country like Brazil, or a predominantly Muslim nation, were to win the Women's World Cup.

Some might scoff at the notion that a moment of glory in sports can have an impact on social problems that have endured for centuries. But then, some people probably didn't pay much attention to Jackie Robinson, either. Besides, this overlooks the fact that -- like it or not -- sports speak to men across the globe in a language that they understand. Ten thousand seminars on gender equality could never match the effect on the male psyche of having men watch Mia Hamm almost single-handedly dominate a soccer game, à la Michael Jordan and Barry Bonds in their respective sports.

Even my own modest experience demonstrates how soccer can change the societal landscape. Like most middle-aged American men, I didn't play much soccer as a child. My introduction to the sport came as a Peace Corps volunteer in Paraguay, an international power in men's soccer despite being one of the poorest countries in the hemisphere. To seal my soccer fate, I married a Paraguayan whose father had played professionally.

Our own daughters began to play youth soccer in Northern Virginia in the mid-1990s -- way back when Brandi Chastain still had her shirt on, the Washington Freedom hadn't even started, much less folded, and the local coaching ranks for little girls were so short-handed that skill-less fathers like me had to fill that assignment. My daughters played on despite the embarrassment.

At the height of soccer mania in our household -- right after the United States won the 1999 Women's World Cup -- my wife and I decided to take our daughters to visit Planchada, the village where I had been a volunteer. That the experience might involve soccer never entered our minds. Yet by sheer coincidence, on the Saturday we arrived, Planchada was holding its first-ever girls' soccer tournament.

This seemed nothing short of miraculous, considering my experience with gender issues in the Paraguayan countryside. A typical episode was that of Luci, a bright 15-year-old active in our local 4-H club when I was a volunteer. One day Luci simply disappeared -- she had gotten pregnant, and had been banished to live with distant relatives so as not to bring shame on the family, even though everyone knew what had happened, and knew that such things happened all the time. Since the father of the child did not want to marry Luci, his family gave her family compensation for the inconvenience all this had caused -- in this case, the compensation was a pig.

I came to remember Luci on the day of Planchada's soccer tournament. As the various teams from neighboring communities arrived on flatbed trucks and oxcarts, Planchada's coach -- the nurse at a health clinic we had built years earlier -- confided that they were short on players and asked if my daughters might play. My oldest wasn't feeling well, but Sonya, then 9, joined in. She was the only participant in the entire tournament who didn't play barefoot. Well trained through McLean Soccer clinics, Sonya held her own, to the delight of her much older teammates. They insisted that she play all the games, and she was instantly elevated to celebrity status in the village. As a footnote, Planchada won the tournament. I don't recall if Luci was there, but it was as I watched the awards ceremony that my thoughts must have turned to her: The first-place prize, to be barbecued and divided among the champions, was a pig.

Later during our visit we distributed clothes to some of the poorest families. It was winter in Paraguay, and temperatures hovered in the 40s. Still, girls in several homes, seeing we were coming, rushed outside proudly wearing their soccer jerseys. When we finally said goodbye -- the car jostling along a cow path converted into a road and overloaded with gifts of cassava and oranges -- a girl came running up with one last gift: a Planchada jersey for Sonya.

Our family has been to more weekend soccer tournaments than I can count since that very special one in Paraguay. Our dream now is to bring the girls' beloved grandfather to see them play. It's unlikely he ever dreamed he would someday watch his granddaughters follow in his footsteps.

Paraguay still has no national women's soccer team and is not among the 16 teams competing in this month's Women's World Cup. But on a return visit this past July I was delighted to see any number of girls and women playing soccer. I hold to my theory that this bodes well for the sport's potential to inspire girls and women across the globe.

It could well be that the Jackie Robinson of women's soccer is somewhere out there still waiting to be discovered, perhaps playing barefoot in tournaments where the winning team gets a pig.

This story has been posted in the following forums: : Headlines; COS - Paraguay; Sports; Soccer