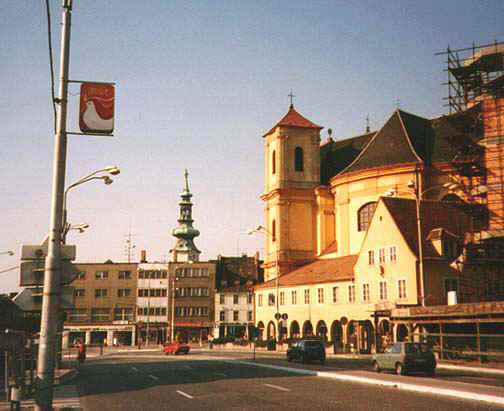 About two weeks ago, I learned that my Friday class would be canceled, giving me a surprise 3 day weekend. I felt I had to seize the opportunity and Go Somewhere. I dispatched a flurry of emails seeking advice for three day weekend destinations from Budapest and spent an hour surfing the net checking out train schedules. I didn't feel up for an overnight train ride ordeal. I ended up gracefully inviting myself to Kosice to visit Josh. Before I left New York, among the teary farewells, friends shoved crumpled scraps of paper with contact information for friends of friends to look up. It wasn't like that really. First, there were no tearful farewells, and second most of the distribution was via email. However I like this image of me on a crowded train platform surrounded by crying friends in rags with grimy faces desperately giving me names and addresses of people to look up for them. I digress. Josh is the friend of a colleague of mine at Columbia. He's been in the Peace Corps in Kosice, Slovakia for nearly two years now and set the standard for providing tours of Eastern European towns. Most importantly, he too spent formative years obsessively listening to Casey Cassem's Top 40 on Baltimore's B104.

Kosice is about 4 hours northeast of Budapest via train. After meeting me at the train station, Josh led the way to his apartment. I changed into a skirt and we were off to the local symphony for a concert. (Tickets: less than two dollars. Hearing classical music live in an Eastern European town: priceless). The applause seemed to last as long as the concert itself, and at the end, the conductor and lead performers were each presented with a rose from a young woman. The next day, we visited the local black market where I sampled some Langos and experienced the requisite post-Langos indigestion. Langos is a savory fried bread served with salt, garlic and sour cream. The rest of the afternoon we spent walking around Kosice, the second largest city in Slovakia.

Kosice reminded me in some ways of the Democratic Republic of Congo. The beauty of decay. Though the center of town had recently been refurbished, the paint was peeling off of many of the buildings on the outskirts. I don't get much of a post communist vibe in Budapest, but I definitely felt it in Slovakia. I could probably attribute it to talking with someone who's had nearly two years to observe and develop opinions about the society and politics. But there were quirky things like the next day when we went to Spis Castle, the museum was inexplicably closed and after we wandered around the ruins were found that we were locked in. The guard had left his post for some reason and had locked the gate behind him. Later that afternoon in the town of Levoca, we attempted to visit a museum. A sign on the door said to inquire at the city hall for a key. The attendant at the city hall assured us that the museum was open.

But I'm getting ahead of myself. Friday night we watched Monty Python's The Meaning of Life, with Czech subtitles at a local movie theatre with some other Peace Corps Volunteers. And yes, Saturday we tootled around the ruins of a castle and a pleasant town that looked all the more pleasant, and washed clean after a rain shower, which we sat out in a restaurant. I've discovered that I find Eastern European pickled cabbage and bland potato dumplings comforting. Spissky castle is about a 2 hour bus ride northwest of Kosice. Founded in 1209 it's also the largest castle in Slovakia. It was inhabited until a fire in 1780. Levoca, where it can be rainy and sunny simultaneously is another bus ride past Spisské Podhradie (the site of the castle). We took a couple of buses back to Kosice and arrived in time for some pastries before hearing a local indy-rock band play. I'm such a sucker for cute boys playing jangly guitars. The scene could have taken place anywhere in the US, though all the singing was in Slovak. There was one song, however, sung an English. Josh and I were particularly pleased that it was a song set to the lyrics of a poem written by our homeboy Edgar Allen Poe.

That evening, we bought some groceries at Tesco, basically a megastore with groceries and clothes, etc. like Fred Meyer or WalMart. I was pretty enthusiastic about it, since I have been having difficulty finding things like cans of beans and peanut butter in the smaller shops in my 'hood. We bought some kohlrabi, as it was a vegetable that had been puzzling me and Josh assured me it was possible to prepare in a tasty manner. We rounded out the day cooking African Ground Nut Stew and listening to Russian girl pop and other regional CDs Josh had bought.

Sunday, we took a series of trains out to the Tatras mountains in the Northern part of the country, close to the border with Poland. Known locally as the Vysoké Tatry (High Tatras) they are the only alpine mountains in Eastern Europe and form the northern part of the Carpathians. I think they're neat because they're relatively compact (27 km long) and appear as a stunning surprise after the gentle hills of the rest of the region. We rode a ski lift mid way up the mountain and proceeded to hike around. Stopping to dine on left-overs form the previous night's dinner. There was snow on the ground, but with the sun shining, it was a comfortable hike. Except for the wet socks. We rode another ski lift further up the mountain to a scenic point. (The mountains in the distance might be Poland!) At this point the snow was deeper and we found ourselves falling up (down?) to our waists in snow drifts. Wacky, madcap fun.

The following weekend I visited Ruben, another Peace Corps Volunteer, who is stationed in Komárno, Slovakia just across the border from Komárom, Hungary. Komárno is about 80% Hungarian, and local Slovaks need to know enough Hungarian to do their shopping. When the borders between Czechoslovakia and Hungary were redrawn after (shoot, which world war was it?) Slovak nationals who were living in what is now the Hungarian side were given the homes of the Hungarian nationals on the Slovak side. Make sense? That is, the borders didn't conform to the nationalities of the inhabitants of the region. Thus, there's a Hungarian majority in Komárno, Slovakia, though they weren't treated as well as the Slovak nationals who moved there from Hungary. Now Komárno gets a lot of funding from NGOs dedicated to Hungarian development. Recently, the conservative party in power in Hungary granted rights of Hungarian citizenship to ethnic Hungarians living in neighboring countries. I don't think this has had any practical affects other than insulting the sovereignty of the neighboring countries and getting Hungarians riled up again about how much land they loss after the World Wars.

Anyhow, I was in Komárno to run a race, not conduct geo-political research. Josh had told me that Ruben was working on a festival that was going on between the two cities. I took the train up (about 1.5 hours) for the day on Saturday to run in a 5K race from one city to the other. I got to cross an international border in a 5K race, and got a T-shirt to show for it, not to mention, another tour of a Slovakian town.

Komárno has just built this Europark near its already-cute-enough town square in an attempt to attract more tourists. However, there aren't enough businesses to fill these new buildings. The architectural style of each European country is supposed to be represented by a building in Europark. It was an awkward attempt at civic improvement. Much of what Josh and Ruben told me about sounded well intentioned and awkward. For example, there are several NGOs advocating for the rights of the Roma. One is called "Dignified Life," and another is called, "More Dignified Life." If your an oppressed minority, which group would you rather belong too?

Back to Budapest page.

This story has been posted in the following forums: : Headlines; COS - Slovakia; PCVs in the Field - Slovakia; Humor