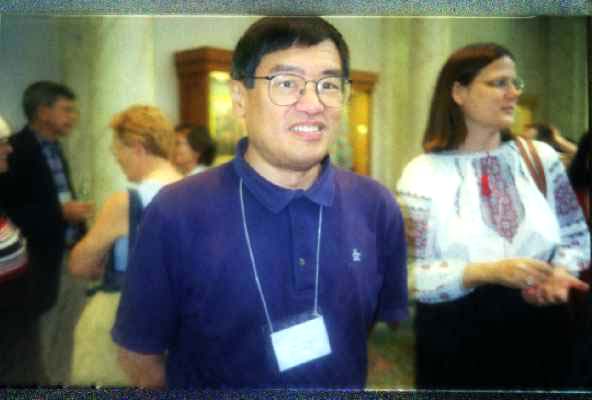 SEATTLE – As the momentum continues to build for a preemptive, military strike against Iraq, many Americans are even more keenly interested in knowing more about the situation in Iraq. What have been the effects of economic sanctions on the children and civil society of Iraq? How are the Iraqi people responding to the current situation?

An Oct. 31 CityClub forum at Plymouth Congregational Church, “On The Ground in Iraq – A Firsthand Report From Two Seattle Journalists,” provided some sobering answers to those questions. Co-sponsored by the Seattle Post-Intelligencer, World Affairs Council and Washington Physicians for Social Responsibility, among other organizations, the forum featured award-winning P-I Foreign Desk Editor Larry Johnson and photographer Paul Kitagaki, Jr. just returned from a two-week visit to Iraq.

Johnson and Kitagaki are among a handful of western journalists who have reported from Iraq in recent months. Against the backdrop of stark images of malnourished, dying children in Basra hospitals, mosques in Baghdad, rusting tanks along the “Highway of Death,” and the faces of ordinary Iraqi citizens, Johnson and Kitagaki shared their reflections on the mood and conditions of that nation as it faces the eminent threat of attack from the United States.

Their seven-part P-I series, which ran in October, provides an all-too-rare glimpse into the lingering impacts from the Persian Gulf War, growing economic disparities, shortages of food, basic medicine, and health care, deteriorating schools, and the changing climate in the country – foremost of which is a growing sense of fear and apprehension about the inevitability of a U.S. military invasion.

The paucity of on-the-ground media coverage of Iraq, commented P-I Managing Editor David McCumber at the forum, was the primary reason why the Seattle Post-Intelligencer dispatched Johnson and Kitagaki for this assignment. Johnson’s first visit in 1999 with photographer Dan DeLong produced an eight-page special report, “Life and Death in Iraq,” which provided a disturbing account of a nation suffering from the weight of eight years of U.S.-imposed sanctions.

According to former United Nations Deputy Secretary General Dr. Hans Von Sponeck, the absence of more in-depth reporting on Iraq of this kind has left Americans with a dearth of information upon which to gauge the veracity of the Bush Administration’s claims of the actual threat posed by Saddam Hussein’s regime. In the post Sept. 11th world we live in, such a void raises serious doubts about the reliability of the information we are getting.

The implications for informed public debate in our nation about the coming war in Iraq are obvious. As Von Sponeck warned during his Aug. 13 speech in Seattle, the potential for disinformation at the highest levels of our government is high. In a democracy, a free press serves an important watchdog function by safeguarding the responsibility of its citizenry to make informed decisions. “Perhaps it is a universal truth that the loss of liberty at home is to be charged to provisions against danger, real or pretended, from abroad,” James Madison once wrote Thomas Jefferson in 1798.

Despite compelling evidence by former U.N. chief weapons inspector Scott Ritter that Iraq is fundamentally disarmed of biological, chemical, and nuclear weapons, which removes the basis for the continuation of the sanctions – a conclusion Ritter reaffirmed during an Oct. 5th Seattle visit – the general level of public awareness in the U.S. about the real conditions in Iraq remains low. “There is no justification in fact, national security, international law, or basic morality to justify this coming war with Iraq,” Ritter said. In his Nov. 5 syndicated column, Sean Gonsalves supports Ritter’s concern. On Oct. 1, 1997 Iraq objected to violations of the inspection protocol (a Security Council-approved agreement established by former U.N. Special Commission Director Rolf Ekeus in 1997) and its manipulation by U.S. intelligence sources. Working with Clinton administration intelligence officials, Ekeus’ successor Richard Butler subsequently drew up a timeline designed to provoke a confrontation with Iraqi officials by the Capable Site Concealment Investigations team that Ritter led. As planned in early December 1998, the White House gave the green light to launch a military strike against Iraq in mid-December.

In light of the Nov. 8, 2002 U.N. Security Council resolution, such a scenario might well be repeated in the coming weeks providing the pretext for a U.S. military response. “What assurances are being taken this time to protect the integrity of the internationally-supported inspections?” Gonsalves asks. “And what’s to stop U.S. hawks from arbitrarily moving the disarmament goal posts indefinitely as a pretext for unilateral action?”

Ekeus shared this concern when he said on Nov. 12 that U.N. weapons inspectors might not unearth all of Iraq's hidden weapons within 60 days — or by the Feb. 21 deadline for reporting back to the U.N. Security Council. "Nothing substantially will be found," Ekeus warned the Washington Institute for Near East Policy. "It might take two years."

It is no small irony that what has been underreported by the establishment press to date are the very realities that the administration’s official story has sought to downplay, i.e. that weapons of mass destruction and regime change are not the only (or necessarily the real) reasons for a preemptive American military strike.

A more plausible rationale, Ritter asserts, is the National Security Strategy released by the Bush administration on Sept. 20, which outlines a long-range plan for permanent U.S. military and economic preeminence in every region on the globe, unfettered by international treaty or concern. The Bush Doctrine, in effect, has committed the nation to preemptive military strikes in the U.S.-declared war on terrorism.

In the last analysis, ground-up reporting – of the kind that Johnson and Kitagaki exemplify in their excellent Seattle P-I series – serves as a healthy antidote by offering a different lens through which American citizens can assess for themselves the realities of life and death in Iraq.

“Since the program began,” reports Joy Gordon in “Cool War: Economic Sanctions as a Weapon of Mass Destruction,” (November issue of Harper’s) “an estimated 500,000 Iraqi children under the age of five have died as a result of the sanctions – almost three times as many as the number of Japanese killed during the U.S. atomic bomb attacks.” Yet Iraqi fatalities continue to be ignored by the mainstream media, despite published reports by the United Nations and other international organizations.

As the Pentagon prepares to ramp up its forward deployment of military personnel and weaponry, and the Bush Administration presses ahead with plans to bypass diplomacy and other peaceful alternatives to resolving the growing Middle East crisis, responsible and balanced media coverage of Iraq is more important than ever before.

Without such coverage, not only is the White House emboldened to skirt any accountability for its decisions in the weeks ahead, but the possibilities for civic engagement and dissent – the very underpinnings of our democracy – are stifled. “Truth is the first casualty of war,” a journalist once observed. Without informed public debate, an already inflamed tinderbox in the Middle East may easily ignite into an international conflagration the likes of which we can only hope will not happen.

This story has been posted in the following forums: : Headlines; COS - Thailand; Speaking Out